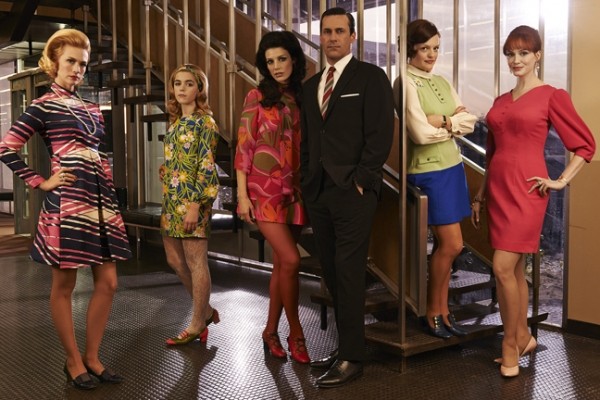 Mad Men
Sunday, April 13 (AMC)
Season Premiere: The seventh and final season of Mad Men, the series that made AMC legit years before the money-printing machine of The Walking Dead fired up, will split 14 episodes over this spring and next, because why not? You put up with it for Breaking Bad, so AMC assumes you’ll do the same for ad man Don Draper. The network has requested the omission of certain plot points in reviews; The Only TV Column That Matters™ requested review materials in a timely manner, so we all failed. Season 7 opens in January 1969, two months after last season left off, and the series’ long-dreaded pre-’70s fashion catastrophes are in full effect (the horror, the horror…). Don (Jon Hamm) and Megan (Jessica Paré) are now in California, as is Pete (Vincent Kartheiser), while Peggy (Elisabeth Moss) is still in New York, banging her head against the glass ceiling of SC&P (now minus the Draper “D”). The stacked-deep storylines of “Time Zones” suggest no obvious conclusion Mad Men is headed for, other than the trip being more important than the destination. God, that is sooo California.

Nurse Jackie, Californication
Sunday, April 13 (Showtime)
Season Premieres: Edie Falco’s Nurse Jackie is now going to run as long as her previous series, The Sopranos, did—six seasons, and we still don’t know if it’s a comedy or a drama. Californication, on the other hand, has always been squarely about the funny with a small side of serious, and Season 7 (the last—they mean it this time) brings it back to Santa Monica Cop, the film Hank (David Duchovny) wrote for hip-hop superstar Samurai Apocalypse: He’s hired by a TV showrunner (another Sopranos alum, Michael Imperioli) to turn it into a series—after books, music, movies and theater, how can Hank possibly blow a television gig? Obviously, he finds a way. (Other) critics be damned—I still love Hank and Californication, and it’ll suck to see ’em go after 11 more episodes. Here’s hoping for some final appearances from Lew Ashby (Callum Keith Rennie) and Eddie Nero (Rob Lowe).

Rocky Mountain Bounty Hunters
Sunday, April 13 (Animal Planet)
Series Debut: Why is this new reality series about human rednecks on Animal Planet? 1. Because “when fugitives disappear into the immense wilderness inhabited by predators like black bears and mountain lions, it takes a special type of hunter to bring these fugitives to justice.” And, 2. One of the bounty hunters’ nickname is “Animal.” That’s it. Thus concludes today’s lesson in Why All Cable Channels Will Soon Be the Same Cable Channel.

Fargo
Tuesday, April 15 (FX)
Series Debut: Same setting and tone as the 1996 movie; different story and characters. And what characters they are: Lorne (Billy Bob Thornton), a manipulative drifter who has his own definitions of “law,” “order” and “fun”; a put-upon insurance-salesman schlub (Martin Freeman) whom Lorne introduces to the Dark Side; a recently widowed ex-Vegas stripper (Kate Walsh) who’s just now realizing what terrible idea it was to move to Minnesota; local cops of varying intelligence (Bob Odenkirk and Colin Hanks); hitmen Mr. Numbers and Mr. Wrench (Adam Goldberg and Russell Harvard); a dim personal trainer with crime in mind (It’s Always Sunny In Philadelphia’s Glenn Howerton) and more—yes, more. At 10 initial episodes, FX’s Fargo will tell a more expansive story, but the overly accented, near-cartoon acting and clever cinematography and dialogue are pure, old-school Coen Brothers (who are onboard with this TV adaptation as executive producers). True TV and City Weekly are presenting the premiere of Fargo at Brewvies Cinema Pub (677 S. 200 West, 21+) on the big screen at 8 p.m. Be there, okey dokey?