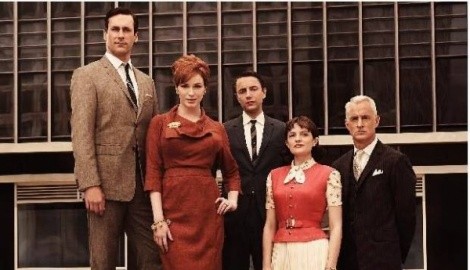 Mad Men Sunday, Aug. 16 (AMC)
Season Premiere: Maybe AMC’s relentless hype for the accolade-ridden ‘60s-set drama has worked too well: “I don’t subscribe to that channel, so I can’t watch Mad Men” is a strangely frequent response. Jesus, people: The former American Movie Classics is a basic cable network; unlike HBO or Showtime, it’s probably in your current channel lineup between TNT and ESPN 28. But, you’ll still wait to watch it on DVD, anyway, won’t you? Season 2 was released Tuesday; Season 1’s been out for a year—the rest of us are moving onto Season 3 now, if you don’t mind. What can be said about Sunday’s premiere without giving too much away: It’s now 1963. The Brits who took over the Sterling Cooper ad agency are going to make the formerly comfy Madison Avenue men fight for their positions. Don Draper and wife Betty are back to being a faux-happy couple, even though Don still can’t keep it in his immaculately-pressed pants on a business trip—hey, those stewardess uniforms were crazy-sexy back in the day, and what happens in Baltimore … what was that slogan? “Figures stoically into tumultuous times of social upheaval”? No wonder they hired Don.

My Antonio Sunday, Aug. 16 (VH1)
Series Debut: According to VH1, former model and soap star Antonio Sabato Jr. is “one of the most desired men on the planet.” So, why does he need a reality dating show to find a woman? Are we really to believe that, after repeatedly dipping Antonio Sabato Jr. junior into a pile of desperate skanks who missed the Rock of Love boat, he’ll find True Love? How/why did he drag his ex-wife and his mother into this crapfest? Will any future VH1 “hunk” ever be able to match the dizzying heights of smarmy douche-nozzlery set by Antonio in the first 15 minutes alone? Is the dude really sporting a tramp stamp? Answers: Because most women have some semblance of gaydar; not if he’s contracted for Season 2; sadly, no; sadly, yes.

Reality Hell Sunday, Aug. 16 (E!)
Series Debut: It’s taken six years to properly follow-up The Joe Schmo Show, the “reality” series that took one real, clueless contestant and placed him in a house with actors directed to make his life hell—and eventually award him $100,000. (Joe Schmo was also Saturday Night Live’s Kristen Wiig’s first TV job, believe it or not.) Reality Hell can’t replicate the fresh genius of Joe Schmo—nor could Reality Bites Back last year—but anything that helps to deflate the runaway idiocy of reality-competition shows (see: My Antonio) is more than welcome in my book. Instead of a single, serialized assclowns-in-a-house premise, each episode of Reality Hell exploits a different style of reality show: Modeling, designing, cooking, family-swapping, etc. Why no 13-‘hos-date-a-middle-aged-gay-underwear-model scenario? Too soon?

Ghost Hunters Wednesday, Aug. 19 (SyFy)
Mid-Season Premiere: We’re in the middle of Season 5—Season! 5! Still no ghosts! It’s a great scam, with plenty of suckers lined up to make Ghost Hunters one of the highest-rated shows on cable, and it’s spawned even more “paranormal investigators” series: Ghost Adventures (same damned show, with a travel twist), Paranormal State (same damned show, with a Dog the Bounty Hunter twist), Ghost Whisperer (same damned show, with a D-cup twist), the list goes on, and yet none produce any more concrete evidence than, say, Space Ghost. Of course, stars Jason Hawes and Grant Wilson flaunt their utter lack of ghost “gets” as proof that the show is “real” and “agenda-free”—they’re geniuses! Think they use the same approach on their Roto- Rooter day jobs? “No, we didn’t find a tampon flushed down your toilet—but we’re going to submit our research and charge you the same anyway … Shhh! Did you hear that? ”