Capitol Steps and the challenge of mocking politics in 2018 America. 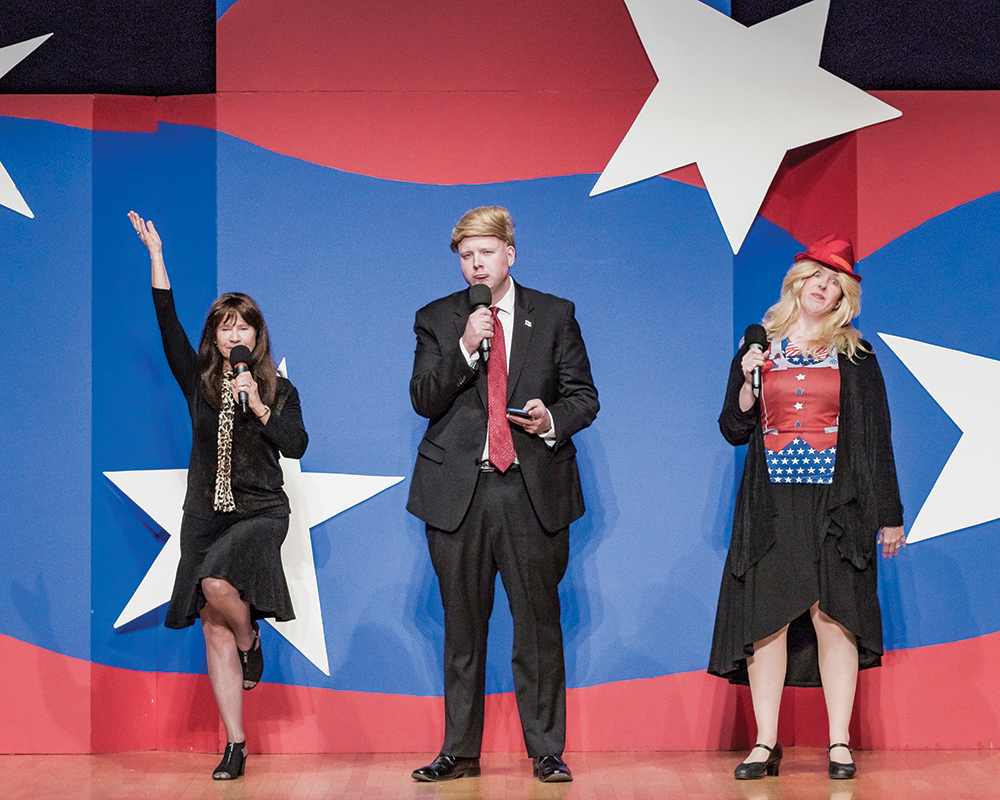 In 2018, political satire seems both essential and impossible. We still need to make sense of the madness erupting daily from our news alerts, preferably with a bit of humor to defuse the tension. But so many of the issues—and people—making headlines feel almost too scary and disturbing to turn into punch lines. Finding that sweet spot ain't easy.

For the Capitol Steps comedy troupe, they're counting on 35-plus years of experience to help navigate that narrow strait between tragedy and comedy. According to co-founder and writer Elaina Newport, the group was born in 1981, when Newport was a Congressional staffer and she joined forces with several co-workers—including Bill Strauss and Jim Aidala—to provide entertainment for the Senate Foreign Relations Committee's office Christmas party. "I had been a piano major in college," Newport recalls. "We did this show, and it was the early days of Reagan, with songs about Reagan, [former Attorney General] Ed Meese. We thought, 'Somebody's going to tell us to stop, or fire us.'"

Instead, the musical revue was popular enough that the participants formed Capitol Steps, taking their name from a then-topical scandal involving Congressman John Jenrette allegedly having sex with his wife on the steps of the Capitol building. Newport says that their approach was inspired by the kind of comedy they grew up with. "Bill [Strauss] was a big Tom Lehrer fan," she says. "I used to steal my brother's Mad magazines. And I'd hear songs by [song parodist] Allan Sherman. I was probably 7, and I didn't get them, but I heard people laughing. When you ask a third-grader what they want to be, they never say, 'a political satirist.'"

Today, while multiple touring companies perform the Capitol Steps songs and shows, the brain trust remains Newport, Strauss and a few others turning current events into parodies of showtunes and classic pop songs—e.g. the absurdity of the Kim Jong Un regime becomes "How Do You Solve a Problem Like Korea." "There's no smoke-filled room," Newport says of their creative process. "There's basically me, a computer and a rhyming dictionary. [Strauss will] sit at his computer and send me something, and I'll say, 'Did you think about this joke?'"

Before even getting to the jokes, however, there's the matter of deciding on the targets. According to Newport, Capitol Steps is generally bipartisan in its skewering, with a couple of important caveats. "The party in power is always going to be a little funnier," she says. "If people think we're harder on the Republicans now, you should have seen it during the Clinton years. For my personal view, I'm an extreme moderate. We go down the list and go, maybe the first songs in a show will be about Trump, then let's get to the song about Bernie Sanders."

Part of the difficulty in deciding how to approach certain subjects comes down to tone. As particular issues dominate the national political conversation, it becomes natural for Capitol Steps to want to tackle them, but to do so in a way that doesn't diminish the seriousness of those issues. "It's very tough," Newport acknowledges. "Nuclear war? Not super funny. So what we typically do is, we take on the politicians. They're public figures, and they're fair game. A classic example of that was Hurricane Katrina. That was one of our biggest dilemmas; it was not a funny issue at all. But FEMA was fair game. You're always looking for the person who's making a serious situation worse."

Another significant factor is the seemingly non-stop deluge of news stories, which can make it impossible for a satirist to keep up. "Things are moving so fast, especially with this president," Newport says. "I actually had to resort not too long ago to texting a joke [to a cast member] who was backstage about to go on."

Capitol Steps often handles such situations by using existing material to address a breaking story. While the Brett Kavanaugh confirmation controversy might only be in the news cycle for a few weeks, for example, the performers can make use of a routine about liberals desperately hoping all of the remaining left-leaning justices hang in there, set to the tune of "Staying Alive." "We've been doing that song since Merrick Garland," Newport says. "And it will probably work as long as it's an issue."

Beyond their live shows, Capitol Steps generally releases an annual recording of new material, with Make America Grin Again as the 2018 installment. Newport believes the title of this particular album is relevant in considering why humor matters, even at a time when a lot of folks might feel more like crying than laughing. "People who are arguing with family and friends on Facebook don't feel like they want to laugh," Newport says. "We've all had fights with good friends recently over politics. So our job is hard. We have real challenges, like 'Let's find wigs as bad as somebody's actual hair.'"