David Byrne's American Utopia turns a concert into a celebration of collective humanity. 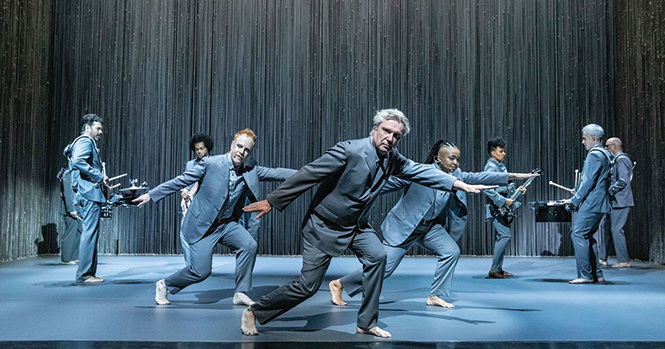 Among the many reasons that 1984's Talking Heads concert film Stop Making Sense is one of the greatest concert films ever made is the way director Jonathan Demme approaches the issue of the audience—specifically, that he ignores it almost entirely. The focus is entirely on the band members as they perform, with no cutaways to crowd reaction; the sound mix de-emphasizes the sound of applause and other audience response. It's a chronicle of David Byrne and the Heads that focuses on the theatricality of the staging, and a performance by Byrne so mesmerizing in its intensity that it feels like he's playing a character.

Among the reasons that David Byrne's American Utopia is nearly as compelling, is that it takes an almost 180-degree opposing perspective on the relationship between on-stage performers and those in the audience. This show is a flat-out party, albeit one where the topics of conversation occasionally get serious. Byrne interacts with those in the crowd, both verbally and physically, with a practiced but playful patter. If Stop Making Sense was almost entirely about watching David Byrne, American Utopia feels more like it's about David Byrne being watched, and about his attempt to make a connection beyond the lyrics he's best known for that often speak to alienation and anxiety.

That's not to say that American Utopia isn't a great concert film simply taking the on-stage activity into account. Byrne outfits his entire band in mobile apparatus, allowing not just his backup singers and guitarists but the keyboard player and percussionists to join him in intricate choreography and stunning lighting design. The terrific 21-song set covers the entire scope of Byrne's career—from early Talking Heads to several cuts off the 2018 American Utopia solo album that gives the show its name—and the music runs the gamut from big rave-ups to solemn and earnest pieces. At 67 years old when the show was filmed, Byrne is in great voice, and still a magnetic enough stage presence that director Spike Lee knows to keep the focus on Byrne while also celebrating the talents of his supporting cast.

But instead of the almost alien affect Byrne presents in Stop Making Sense, here he's warmly and genuinely human, down to the decision to have himself and all of his band members perform barefoot. Right from the outset, he plays with his audience's familiarity with his persona, using the familiar herky-jerky hand motions from Talking Heads' iconic "Once in a Lifetime" video as a punch line. He thanks the audience after songs for their applause; he drops anecdotes between songs, and urges those in attendance to vote. And Lee's direction allows the reality of the show to emerge in showing us that the crowd is clearly reacting with more enthusiasm and interaction when Byrne is playing the old Talking Heads classics, like dancing in their seats and shouting along the title of "Burning Down the House."

What emerges from David Byrne's American Utopia is an almost pleading sense of collective experience during a time of fragmentation and conflict; it's striking how many of the songs included here include in the lyrics some reference or other to "home" or "house." Byrne explains during one between-songs break that the staging choice of making the band mobile was at least in part because "people like looking at faces," and that additional level of humanizing the players resonates. Some viewers are bound to be put off by Byrne getting overtly political, whether it's kneeling in front of a projected image of Colin Kaepernick, or doing a cover of Janelle Monáe's Black Lives Matter anthem "Hell You Talmbout" while Lee inserts images of Black Americans killed by police, but that's also evidence of an artist opening himself up to what he's feeling. You get the impression that American Utopia isn't an ironic title, but a dream he's sharing. As Byrne leads his band members on a line through the aisles to the set-closing "Road to Nowhere," close enough for his fans to touch him, it's clear that he wants us to be on a road to somewhere, and that he wants us all on that road together.