NVM expand their personal moody sound to put themselves in the listeners' shoes. 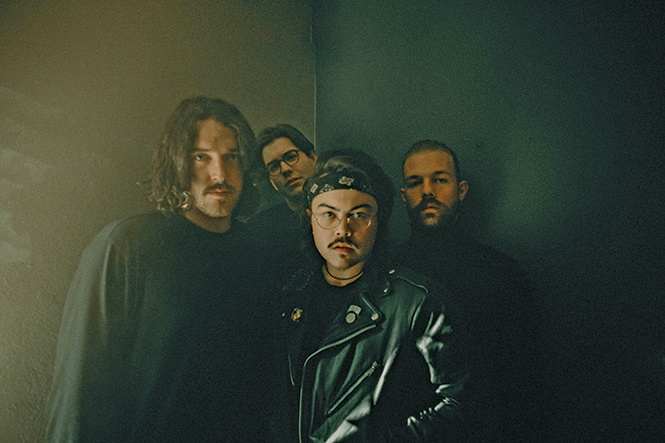 While they started out in 2016 scratching an itch to write a few sad rock songs, St. George-based shoegaze number NVM have moved onto bigger goals—some as lofty as making the whole world cry.

As they introduce their first full-length record, Thermal Memory, they're not only attempting to grab the attention of those who have listened and liked them before, but to touch (or break) the hearts of a broader audience. By building upon the dreary, dark framework they've built with their first two EPs, NVM bring an arsenal of brightened soundscapes to the table to re-introduce themselves with a polished, confident and relatively newfound sense of identity. Whether "the world" means their hometown, Salt Lake City or Utah at-large—make the world cry, they do.

Throughout their first two EPs—the aptly titled (maybe self-titled?) 2017 EP, featuring the word "Nevermind" on the front, and 2018's Aqua Cross—NVM have used their myriad influences to experiment with various soundscapes and sonic vibes. The result has been a collection of songs whose notable characteristics are emotion-heavy screaming and dark, dramatic atmospherics.

However, with their debut LP, some major stylistic changes are in place. When it came to deciphering what direction NVM were going in their new album, they knew that it would take a lot of change and definition to get it just right. "We needed time to refine our craft and to understand who/what we are as a band," lead vocalist Austin Mariano says. "Some of the biggest adjustments we made have been song structure. We put ourselves in the listeners' shoes for Thermal Memory, which is something we haven't done before."

While developing their nuanced sound, NVM pulled from the unique musical backgrounds of each member. "Our sound comes from a conglomerate of multiple influences," Mariano says. "I think we manage to blend all that we love together in a unique melting pot, with the heart of rock 'n' roll at the forefront."

While Mariano found his start in high school, where he was involved with a "crappy" pop-punk band, McCabe Johnson has been in multiple hardcore bands, such as Liar's Tongue and Takeover, both of which explored different sub-genres within hardcore. Guitarist Jordan Talley has experimented with a variety of projects in St. George. As for their bassist, Ian Ford, NVM is his first dive into the world of being in a band, despite his music education background. Considering these varied backgrounds, Mariano remarks, "We all are different in so many ways, but we all share the same vision."

While Thermal Memory opens itself up for a lighter delivery, the lyrics are still laced with depressing, melancholic subject matter—staying true to NVM's somber roots. The way emotion is distributed throughout this album is pungent and genuine, leaving listeners with a heavy heart. Lyrically, Mariano pulls inspiration from past, present and upcoming traumas, as well as fears, love and other personal experiences. "The new album isn't a stranger to things I've written about in the past, but this round, it's more consistent in relating to others and not just myself," he says.

Now that they've got a cohesive new album out, their top priority is touring and playing shows in 2020. "Being from the Southern Utah area for us has been tough for exposure, shows, touring and building our own fan base," Mariano says. "However, over the past few years, I think we've learned to embrace being outcasts of these more popular areas. It's allowed us to develop a harder-working mentality—plus, we are so grateful and stoked for any opportunity that comes our way."

Their first show of this tour pairs NVM with one of their biggest influences, Hunny, at the Loading Dock on Wednesday, Feb. 19. Their official album release show, however, is still a few months down the road, on June 19 at The Urban Lounge, where they're hoping to have some physical copies (vinyl!) of Thermal Memory for purchase. Be sure to catch their upcoming performance, and keep an eye out for others since this up-and-coming band of darkwavers are absolutely worth following wherever they go.