Two examples of beers with a distinctive malt kick. 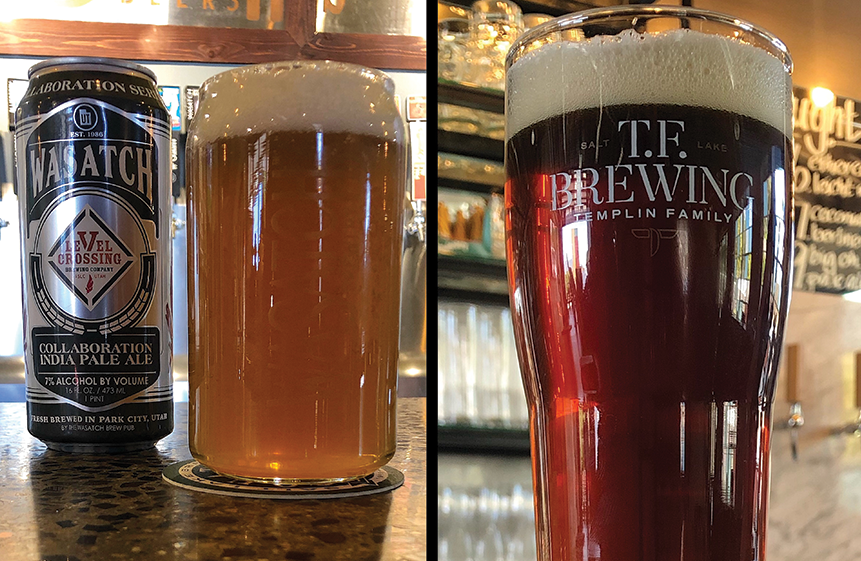 This week's beers offer up a nice exercise in the use of malts. By utilizing sugars, enzymes and yeasts in different ways, you can get a good idea of how this diverse beverage became such an integral part of cultures from around the world.

Wasatch Brewing/Level Crossing Brewing Co. Collaboration IPA: This new "buddy beer" pours an apricot/orange hue with a moderate amount of haze. I don't think this beer is necessarily a "hazy" beer; it's likely just unfiltered. Two fingers worth of pocky white head forms, becoming meringue-like as it settles, and chunky lacing drapes the sides of the glass, making it an attractive-looking beer for sure. Apricot jumps out at me as my sniffer hovers over the foam. It's more of the dried variety, pleasant and aromatic. Tangerine, mango and pineapple follow suit in that order of intensity, while a honey-drizzled biscuit maltiness sets the base. Another deep whiff brings a mild pine hop note that is reminiscent of a mild boozy hit, reminding me of hop-produced pine. It really gets the tongue watering.

The nose keeps its promises. The flavor profile is hop forward, and is based around that citric and tropical profile. Tangerines and underripe peppery mango make up the majority of the profile, but that dried apricot sneaks back in there toward the finish. The honey and biscuity malts are substantial enough to keep this IPA from being dominated by the citric hoppiness. Sluggish carbonation and a moderate, silky body make this one a slow mover over the tongue. The dryness builds with each swig, but the bitterness never steps past moderate. There's a good balance between malt sweetness, fruitiness and bitterness.

Overall: This collaboration is an all-around solid IPA from Wasatch and Level Crossing. The 7% alcohol is approachable, and though it comes across as more of a West Coast style IPA, it leaves some wiggle room for those who might skew more toward the less bitter end of the IPA spectrum.

Templin Family Brewing Luckenbach: This beer pours a clear, fairly dark chestnut color with some exquisite ruby highlights. If you look at the accompanying photo, you can really get a sense of what I'm talking about. The foam produces an eggshell color that stands two fingers tall. It retains its puffiness, due in part to the tiny etchings in the bottom of the glass, specifically designed to encourage foam retention. All of this foam leaves some decent gnarled tree-looking lace around the glass as the ale slowly drops away. It smells of gritty, crackery caramel malt, oily beer nuts and weak bittersweet cocoa. A bit of cold coffee and a plain earthy, mineral-like dryness linger in the nose.

The taste starts with bready caramel malt, toffee and a bit of black tea. The sweetness is more subdued than is typical for the style. In the end, I get an earthy pine-driven hop dryness. It's generally smooth, with a small stab at a nutty creaminess. It finishes on the dry side with caramel, toffee, chocolate and nuttiness all carrying on in the background. The carbonation is quite understated, with a body that is adequate for a 4% beer.

Overall: This beer offers high drinkability, disappearing from my pint glass in six swigs. Being an American-style brown, this leans toward the drier side, which adds more nuttiness than sweetness.

Draft beers from T.F. Brewing are rarely available outside of the brewery, so you'll have to look for Luckenbach there. Collaboration IPA is at most Wasatch locations and should be popping up at Level Crossing's bar soon, if it's not there already. As always, cheers!