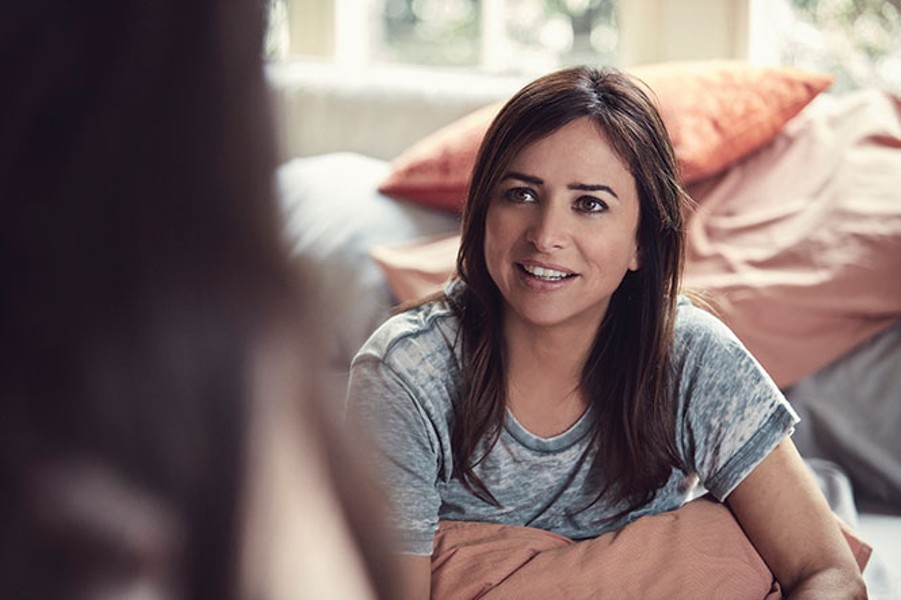 Better Things
Thursday, Nov. 10 (FX)
Season Finale: Like the just-wrapped Atlanta, Better Things is a comedy like no other—on FX or elsewhere. Pamela Adlon's semi-autobiographical story of a B-level actress/saint-level mom (her daughters are the worst) delivers no overly grand statements or sitcom-wacky situations; it just makes it through another day and drops subtle, been-there wisdoms. Better Things swings from sweet to sad to snarky with an assured precision that her creative partner, Louis C.K.'s Louie, never quite nailed, and Adlon subverts the first impressions of her co-stars beautifully (OK, her daughters aren't that bad). Hell, FX aired the 10 episodes in random order—a note to future on-demanders—and it still worked.

People of Earth
Mondays (TBS)
New Series: It's not as instantly defined as recent TBS comedies like The Detour or Angie Tribeca (you know, as Vacation and Naked Gun clones, respectively), but People of Earth at least has ex-Daily Show correspondent Wyatt Cenac, which is a hell of a start. Cenac plays a New York City journalist dispatched to a small upstate town to interview an alien-abductee support group, and investigate "extraterrestrial activity" in the area. It's a quirky enough setting, like Parks & Recreation with Lexapro dumped in the water supply, but People of Earth leans more weird than funny, and the characters are even less fleshed-out than those of TBS' weakest new sitcom, Wrecked. But, as I always say about TBS: At least it's not another King of Queens rerun.

Good Behavior
Tuesday, Nov. 15 (TNT)
Series Debut: Whereas Animal Kingdom—TNT's previous bid for grit-drama cred—was mostly bark and little bite, the rebranding network's new Good Behavior has teeth. Not-so-lovable loser Letty Dobesh (Michelle Dockery, Downton Abbey) is fresh out of prison and low on prospects when she hooks up with a magnetic hitman (Juan Diego Botto) who'll most likely derail her already shaky plans for getting straight (well, him and the drugs). Like Cinemax's fantastic and novel-based (writing matters, people) Quarry, Good Behavior takes a boilerplate crime-noir setup and twists it into unexpected shapes, going deeper than usual TNT fare. Dockery and Botto are transfixing to watch, and director Charlotte Sterling (who also helmed Queen of the South's similarly impressive pilot) brings the sweat of the South alive. Yes, now there's another show you have to watch.

Sweet/Vicious
Tuesday, Nov. 15 (MTV)
Series Debut: Intentions were good-ish: Sorority girl Jules (Eliza Bennett) and outcast computer-punk Ophelia (Taylor Dearden) team up to beat down sexual predators on their college campus, like Kick-Ass filtered through Jezebel. It's a heavy balance to strike, avenging rape survivors and dropping post-feminist snark (not to mention keeping up on classwork; vigilantes should be sponsored by Red Bull), and Sweet/Vicious' Serious Issues half isn't yet as compelling as its Violent Fun half. Still, credit to first-time creator/writer Jennifer Robinson and MTV for hitting on a hot topic while it's timely, instead of five years from now in a tossed-off Law & Order: SVU episode. And, of course, the soundtrack rocks—MTV hasn't completely lost its touch.

Ice
Wednesday, Nov. 16 (Audience/DirecTV)
Series Debut: Crackle's The Art of More—a star-studded drama about high-end art crime—streams its second season today, and now DirecTV's Audience network is debuting Ice, a star-studded drama about diamond thieves. Is there a new 1-percenter TV trend that I missed? Anyway, Freddy (Jeremy Sisto) puts his family diamond business—and his family—in jeopardy when he kills a connected rival gem dealer; now it's up to his half-brother Jake (Cam Gigandet) to save his ass from a ruthless diamond-cartel crime boss (Donald Sutherland). Violence, sex and shiny-object fondling ensue, but who needs to add this "meh" trinket to an already overstuffed Too Much TV queue? And why wasn't it titled On the Rocks?

Listen to Frost Mondays at 8 a.m. on X96 Radio From Hell, and on the TV Tan podcast via Stitcher, iTunes, Google Play and BillFrost.tv.