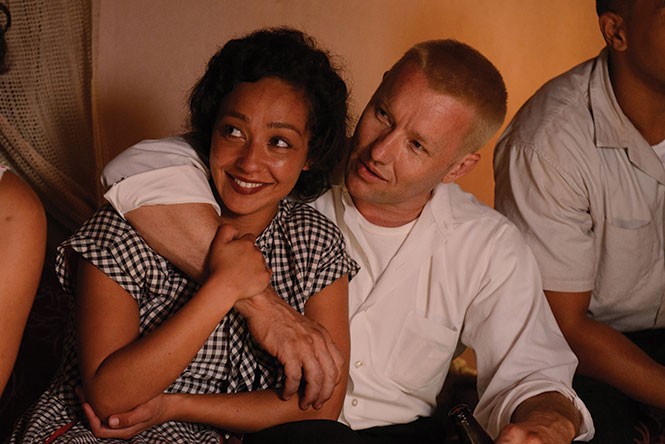 Artists don't always choose to have their work say something particular about the time in which it appears. Sometimes, the time chooses the work. This time might have chosen Loving.

That is perhaps an unfair burden for writer/director Jeff Nichols' film to be asked to shoulder. After all, Nichols is only trying to tell a story, albeit an important story in American history: the landmark 1967 Supreme Court decision in Loving v. Virginia that rendered states' anti-miscegenation laws unconstitutional, and affirmed the marriage of a white Virginia man, Richard Loving (Joel Edgerton), to his "colored" wife, Mildred (Ruth Negga). On a certain level, though, Loving is about people who find that they have no choice but to insert their lives into something bigger, even when it might seem simpler and easier not to fight.

There's even a particular grace to the way Nichols introduces the relationship between Richard and Mildred at the outset of Loving circa 1958: They're already a couple, with no origin story necessary to explain how these two people improbably came together. When Mildred learns that she's pregnant, she and Richard drive to Washington, D.C., to be legally married. But that marriage holds no standing when local sheriffs break in on them in the middle of the night at their Virginia home, beginning a nearly nine-year legal battle during which they're required to remain outside of Virginia for 25 years in order to avoid prison.

No operatic drama accompanies the scene of their arrest, and indeed that's the way Nichols approaches almost the entirety of Loving. David Wingo's musical score is sparingly used, lending the film a sense of restraint that might be surprising in a story that could easily lend itself to grand moments. The simple realities of the Lovings' lives—doing their work, raising their children—become the narrative base. Even the crucial arguments before the Supreme Court are given only a few lines from the Lovings' ACLU attorneys, including Richard Cohen (Nick Kroll). The Lovings opted not to be present for the court arguments; Nichols chooses to stay with them.

This matter-of-fact approach extends to the two lead performances, which are remarkable in their understated complexity. Negga's Mildred builds her determination to pursue the case on simple family desires—she wants her children to grow up in the Virginia country rather than the D.C. city, and be able to visit her own parents and sister—that only gradually evolve into a sense that their case could ultimately change the lives of other couples like them. Richard, however, remains focused on his own family, and it's here that Edgerton's performance evokes something special. He's not a hero; he resists Cohen's suggestion that they deliberately try to get arrested, and he has no desire to speak to the press. When asked by Cohen if he has any message to deliver to the Supreme Court, Richard responds simply that "I love my wife." This man has no interest in changing the world, but the love he has—refusing to consider a divorce, even when a black friend suggests it's an easy way to uncomplicate his life—changes it anyway.

Loving takes its sweet time building toward its high points, and while that helps it earn every emotion, the deliberate pacing combined with Nichols' low-key staging can make the events before the ACLU gets involved feel pokey. Nichols almost seems afraid of bold gestures, to the point where a visual juxtaposition like a rope thrown over a tree branch while Cohen speaks before the Supreme Court feels positively startling.

But there's also a reason that Nichols devotes so much time to showing Richard at work as a mason, slathering mortar onto bricks, carefully checking each one with his level. Laying the foundation for the places other people will live their lives isn't sexy, but it's a work that has to be done, by people with no sense that they've done anything heroic. As the real-life Lovings are shown at the end of the film in an iconic Life magazine photo—laughing together over The Andy Griffith Show, Richard's head resting in Mildred's lap—it's hard not to think about the hard work ahead in our own time, and the kind of love that becomes too big not to change the world.