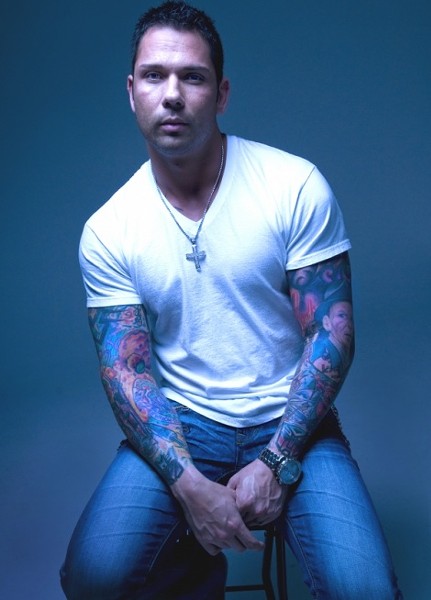 Marcus talks about his stint on NBC’s Last Comic Standing as if it happened a decade ago. It was only 2008—but in comedy years, that’s a lifetime.

“It’s weird to think that it’s just been two years since the TV show,” the tattooed comedian says. “Every day, I’m just fighting to stay relevant. People run into me all the time and say, ‘Hey, aren’t you the guy from Last Comic Standing? What are you doing now?’ I’m still a comedian, touring all over the country—but if they don’t see me, it’s not real. This is my opportunity to put something out there I’m proud of.”

That “something” is a new comedy concert Marcus is filming at Kingsbury Hall on May 19. He’s calling it The Hand That Feeds, the follow-up to his post-LCS special of two years ago, the cockily titled Second to None.

After the hard-working West Jordan comedian finished second on the Season 6 finale of Last Comic Standing in the summer of ’08, offers trickled in for a stand-up special. Rather than traveling to either coast to slap together a cookie-cutter hour (such as those ubiquitous Comedy Central Presents specials), he assembled a pro camera team and put together his own live taping in Ogden by fall. As it turned out, Marcus and his film crew had the ambition and technical chops—Second to None looked like an HBO-quality concert special—but the network suits thought he was still a bit green.

“When we did Second to None, Barry Katz—the manager of Dane Cook and other comics—was there for the live taping,” Marcus recalls. “When it was done, he said ‘I gotta have it.’ He took the show to Comedy Central, who said ‘He’s not ready; he needs more time.’ Looking back on it, I know exactly what they meant. There wasn’t enough ‘me’ in the comedy. … I needed a couple of more years to tour, to grow and go through some stuff.”

After one more year of touring, growing and stuff-going-through, Comedy Central called back for a progress report: “They asked, ‘Where’s Marcus at now?’ We said we could put together a little taping, show what I’m doing now. We did Wiseguys on a Sunday—there were about 26 people there, and we filmed an hour and a half of me onstage and sent it off. They got it and said ‘That’s what we want.’” But, it wasn’t all good news: “They wanted to work with me, but they weren’t buying any outside product. They said I’d have to come to New York and let them film me.

“I’d been working my ass off for a year trying to make something they’d be interested in,” Marcus says. “But I’ve seen Comedy Central Presents specials. They don’t know the beats, the rhythms—I’ve written a two-hour show, and they’d just cram it into an hour with commercials. Editing comedy—editing anything—is hard. I said, ‘What if I finance, selfproduce, edit and deliver a final product?’ Why not give them a quality, finished product shot in a room with 2,000 people?”

Which brings Marcus to the daunting task of filling Kingsbury Hall in advance. Utah is notoriously a walk-up audience; unless you’re the Jazz, events rarely sell out ahead of time.

“The waiting for the tickets to sell is stressing me out,” he says, the weeks of relentless promotion beginning to show on his brow. “I wanted to do something here in Utah. If this is the one that makes it on TV and breaks big, people will get to say, ‘I was a part of that.’ “NBC used to fill the Last Comic Standing tapings with paid models, taking up the first rows. I want my fans … I want it to be real.”

Logistics aside, The Hand That Feeds will feature a more “real” Marcus, a performer who’s learned that personalization connects more than sensationalism.

“As a comic … [he pauses, weighing his next statement] I’ve grown. I don’t have to bounce off of the walls. It’s more about the jokes than the presentation, and the pauses and small moments. This will be a two-and-a-half-hour special, and there will be some material that I’m doing only for the filming.”

After The Hand That Feeds (which will also be his last Utah appearance of 2010), Marcus goes back to the road and the all-too-serious business of being funny for a living.

“Celebrities go dancing and kids sing karaoke on TV, and they’re on the cover on Rolling Stone,” Marcus laughs. “A guy goes on a reality show to find a girlfriend, and he’s on the cover of People. Comics—some great comics—go on television and perform material that they wrote, crafted and have been working on for years … and no one gives a shit. It baffles me. People in Los Angeles do it as a bridge, waiting for their next acting gig. I say, what’s wrong with being a great comedian? Comedy needs to be given respect.”