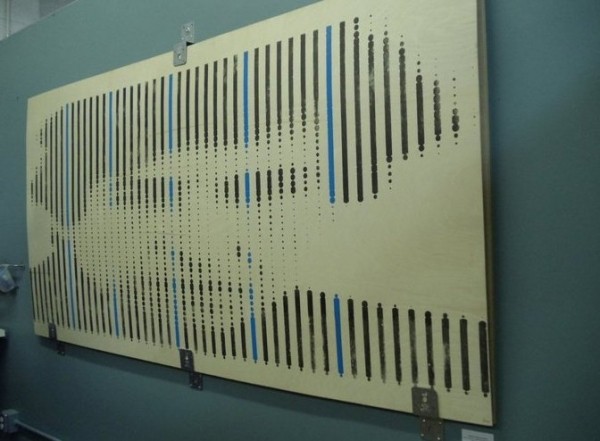 The whole is larger than the sum of its parts. That’s one of the main tenets of Gestalt psychology—and it also summarizes the artwork of Margaret Tarampi.

But there’s more to it than meets the eye. The place she has found for herself in art has its foundations in psychology and architecture, for an aesthetic basis that has more dimensions than the surfaces of her works might reveal.


Of course, that depends on the angle from which you view them. Composed of dots, the works in We Are Salt Lake are anamorphic images, meaning they literally must be viewed from a certain angle, at which the dots combine to create portraits; otherwise, they appear a meaningless jumble of circles in paper, fabric and wood. The viewer is guided through the portraits by glass panels, which reveal the portraits when looked through.


The idea for this collection is a continuation of themes featured in Tarampi’s entry in City Weekly’s Out Of the Box project, which in 2011 commissioned local artists to design artwork for the metal boxes in which the newspaper is distributed around town. Hers—currently located outside the Salt Palace Convention Center—has the same title as this show.


The subject matter of We Are Salt Lake is intended to represent the area as a community that is stronger as a whole than any given individual, though it is the diversity of those individuals that give it strength. She has exhibited in several group shows, and her earlier work depicts some famous people and iconic places, like Delicate Arch, but this one is all about people she felt make Salt Lake City the place it is.


The subjects are ones that are not likely to come up in discussions of famous locals or civic leaders. Katie and Spencer Hall are heroic in their struggles to raise a child: Katie has Mosaic Turner syndrome; their son Jonas has Mosaic Down syndrome. And both parents are completing advanced degrees at the University of Utah.

Other subjects include Dut Bior, a “lost boy” of Sudan, who emigrated here from that country to escape the violence of civil war and founded the Student Orphan Aid Program, which provides educational opportunities to orphans; and Kim Russo, a case worker at the Fourth Street Clinic who works to ensure that homeless people have adequate health care.

More recognizable subjects, representing the importance of sports to the area, are professional freeride skier Jen Hudak and professional mountain bike racer Alex Grant. The most “famous” person in the show, Salt Lake County Mayor Peter Corroon, was chosen because he “believes that government should be accessible to all citizens,” as his bio in the show states.

Much as the “gestalt” or whole of these works of art is more than the sum of the elements that make up them, the disparate elements of Tarampi’s studies combine to make it an assertive artistic statement. A Ph.D. candidate in cognitive neuroscience at the University of Utah, she has a Bachelor of Architecture with minors in psychology and architectural history from Carnegie Mellon. From becoming interested in the way buildings shape our experiences, she branched out to a fascination with the neurological structure of the brain—the architecture of the mind, so to speak.

“Interdisciplinary thinking has become a central component in my theoretical and practical pursuits,” Tarampi says. “I have built upon the proposition that there is a relationship between psychology and architecture and, more broadly, the arts in all of my endeavors.” Her architectural work has a lot to do with the ways we perceive space in our environment, she adds, “while in my artwork, I have explored both assumptions and manipulations of the human perceptual system, as well as the idea of place and spatial hierarchy in architectural space.”

A major component of the show is the donation of half the sales proceeds to charities chosen by the subjects of each piece.

“I wanted the subjects to feel invested in the show,” Tarampi says. “I wanted the show to be about more than just about my work, but rather truly reflective of our community and the theme of the show. In a way, incorporating the charity aspect of the show was my way of giving back to the community in a tangible way.” In that way her work, a small part of the tapestry of the current local culture, in its turn adds to the richness of the whole.