Manson opens up on Born Villain 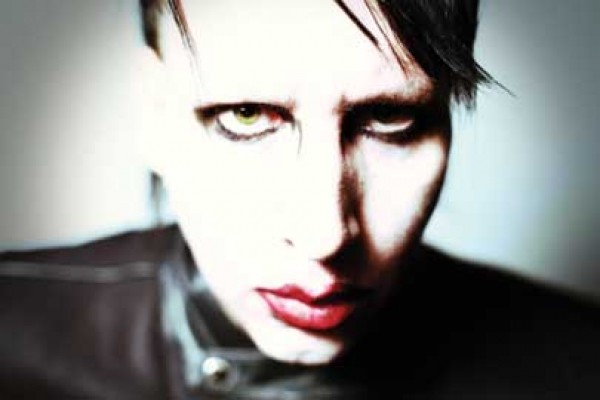 Marilyn Manson only works the night shift. He swears he rarely sees the sun. A fellow music journalist from Los Angeles—we’ll call him Juan Sweathog—told City Weekly that he was once invited into Manson’s home for an interview and didn’t return until the wee hours. As he drifted off to sleep, his answering machine picked up a call. “Hey, Juan. It’s Manson …” A meaty postscript ensued as Juan lay in bed, laughing. When you get time with Marilyn Manson, it’ll be worth it.

Manson’s a showman. He knows his role and revels in every opportunity to leave someone gobsmacked—or doubled over in laughter. Mostly the latter, and even when the jokes ring bullshitty, like he’s trying too hard, he admits it before you can call him on it. In that way, he’s a sinister trickster, anticipating “gotcha” moments, even setting them up, only to snatch them away at the last minute.It’s good fun, and it starts almost immediately.


First topic: a recent interview with Juan. “I tortured him,” Manson says. “I made him wear headphones to listen to [the album], then I left the room. Total sensory deprivation. And I had video cameras on him the whole time; I watched him on monitors. No reason.”

It’s as though Manson’s geeky former self, Brian Hugh Warner, is living out the wildest fantasies of his pre-fame days. But asked if he’s just a regular dude, Manson plays to type. “I am, for the most part, the same person offstage as onstage. The only difference is, offstage it’s with people I know, and onstage it’s with strangers. And I have a microphone. And I wear a little bit more makeup. But still less than most strippers. Or newscasters.”

His humor notwithstanding, he appears to have a sensitive side. When told that my daughters love “Pistol Whipped” from the new album Born Villain, Manson starts to laugh. Then he ostensibly buys think time with an aside about singing and playing guitar simultaneously on the track, which he’s never done before. Finally, he comes out with it. “I’m just curious. Did you understand the play—that I thought was an almost childish pun—that the flower has a feminine part called the pistil?”

Briefly, I wonder if Manson was tactfully trying to explain to a father that the song his daughters enjoy is about rough sex. “Pistol Whipped” could also be about raw violence, but they’re too young to pick up on either; they simply responded to how the tune “rocks.” But if that was his concern? How sweet of him.

Turns out he really wants to talk flowers. “The whole record has this theme of flowers and redemption and gardens. You plant seeds … you water things, some things you don’t water. Some plants are fake and some aren’t.”

Manson says his Christian-school days led him to view flowers in “almost a zombie sort of thing, like they’re born out of dirt.” Born Villain is his “undead zombie apocalyptic album,” but with an emphasis on psychological horrors. “What I always liked about zombies is what’s going on inside the house. … The people become the monsters and the morality changes.”

He felt as though he’d been metaphorically barricaded in a house and had metamorphosed. Not liking who he’d become, Manson’s priorities shifted to proving himself to the people who believe in him. He seized “a new opportunity” to “open up.”

“I related it to being locked in a room in an end-of-the-world situation. All you’ve got is a pencil and a piece of paper. That’s gonna make you more creative, more determined to stick to your gut instinct. Because whatever you choose to do—the pencil, you can’t sharpen it; you’ve only got so many options with it. You can write a suicide note, your will, a love letter, draw a picture, write a song, write a poem, wipe your ass with it, use it as a weapon.”

He emerged with his most fully realized work, a balls-out rockfest that is all of those things, from a heart-on-his-sleeve epistle to a dagger. The songs encompass all of the Mansonian mischief, as well as diamonds of introspection and sly commentary. Two of these are particularly brilliant. “I’m not man enough to be human but I’m trying to fit in and I’m learning to fake it,” Manson screams on “The Gardener.” And on a bonus track, he cheekily covers Carly Simon’s “You’re So Vain.”Â