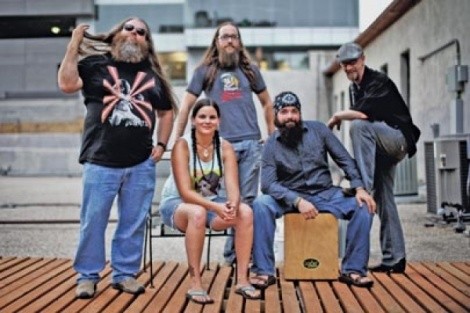 Every prominent chef has something that sets him or her apart from the crowd. Emeril Lagasse shouts “Bam!” when he adds some heat to a dish. Paula Deen uses excessive amounts of butter. And Giada De Laurentiis is simply hot.

To cook up delectable, genre-bending tunes, Talia Keys blends the talents of herself and a mishmash crew of four musicians as diverse as ingredients in a spice rack. Salt Lake City-based Marinade’s recipe, however, isn’t secret, like Colonel Sanders’ 11 herbs and spices are.

“At one point, we had eight members, but gigs were just too complicated,” Keys says. “A three-piece would be ideal, money-wise, but sound-wise, we need everyone.”

That’s especially true for live shows—how their music is best experienced. “We’ve had to play without someone several times, and when we get everybody back, it clicks and we’re like, ‘Ahhh.’ ” And the audience is like “Mmmmm,” because their sound’s scintillating, multi-flavored kick—with its spicy funk, salty blues, savory reggae and chill jazz—is finger-lickin’ good.

After seeing them a year ago, I caught Marinade in July at Pat’s Barbecue. They’ve come a long way. With Keys at the helm, playing drums and letting her pipes soar to epic heights, Marinade is tight.

Keys calls that their tame, “PG,” all-ages show, even though they still sold their “Soak Your Meat in This” T-shirts. Folks bobbed their heads and ate ribs as Keys’ howls filled the small main hall. The location is fitting for two reasons: It strengthens this meat-centered metaphor, and it’s where the band got started.

In October 2007, Keys took that stage with blues stalwarts Tony Holiday and Jordan Young—both now living in the South—for a Thursday night open-mic gig. After a year, the group, Blue Route, disbanded, thus paving the way for Marinade.

Keys is the band’s fulcrum. She met Trevino while working at REI, where they jammed fireside at company barbecues. With loose jams at their core, the duo found Pizza; the rest of the band soon fell into place. A gig at Johnny’s on Second around Christmas 2009 got the ball rolling and, after a string of shows during Sundance 2010, the final five-piece was set in place.

In concert, Marinade plays songs from their EP, Juicy, a five-song disc released in April 2010 featuring all originals. Keys, however, calls that effort outdated. The band has written seven songs since, prepping them for a debut full-length. To flush out extended sets, they pull from more than 25 covers, spanning the spectrum from the Grateful Dead to David Bowie, Bob Marley to Etta James.

Keys, a full-time musician—rare in this town—is the band manager and booking agent. Through serious playing nearly every weekend, they congealed as a band, and they’re booked solid through the fall, which includes their first-ever extended tour. They have just returned from a two-week jaunt where they travelled as far east as Denver.

Making the jump from weekend gigging to hitting the open road is a pivotal moment for a band. “It’s like having a make-up-or-break-up dinner: We’ll know after this if it’s going to work long-term or not,” Keys says. “We’re going to spend nine nights together in one tent or one hotel, basically 24/7. We’re going to learn a lot about each other.”