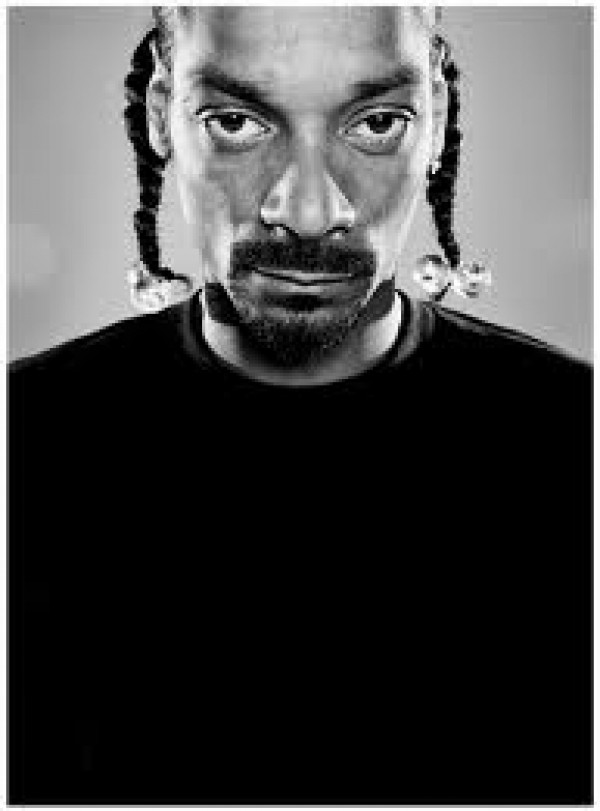 When Snoop Dogg had the gas tank in his Snoop DeVille filled with water instead of gasoline by a prankster, he was not happy. This was also not a pleasant situation for celebrity photographer Mark Owens—delayed by the prank, Snoop was two hours late for his first photo shoot with Owens. Owens’ images capture the personality of his subject, so how was he to capture Snoop’s personality if the Snoop DeVille had just been sabotaged, and its angry owner was not himself?

Owens gave Snoop a ghetto blaster, turned on music and, after taking several shots and showing them to Snoop, he soon had the rap star convinced he was in good hands. Owens produced some of his best shots from these impossible circumstances. Since then, Owens has established a personal, as well as a professional, connection with Snoop and has produced some iconic images of him.

Mark Owens—whose work is currently being shown in Big Shots of Big Shots at Pebbles & Twigs—has a personal touch setting him apart among celebrity photographers. Owens likes to photograph personalities who are at the top of their field, and does this as he develops personal connections with the individuals. He photographs them not as objectified beings, but as human beings.

To this end, Owens has become accomplished in environmental portraiture. He defines this as “an environment to transmit a message about the subject; sometimes it is literal, or sometimes you ‘flip it.’ ” This “flipping it” is where Owens is able to make his individual mark as a photographer and give the celebrity an intuitive personal touch.

In an inventive full-body portrait of top snowboarder John Jackson, Owens does not pose him in typical snowboard gear. Instead, in this unique image, the athlete stands in a baggy, vintage baby-blue tuxedo with a ruffled shirt and bowtie, his long blond hair pulled back by a blue headband; in his hand, he’s holding the strings of a cluster of blue and white balloons, all while standing in blue socks on pavement against a mural of a large blue and white wave. Although Jackson is most closely identified with snowboarding, he also has a passion for surfing. Owens has creatively captured Jackson's carefree personality in this photograph representing his individuality, not his public persona.

“I just like to shoot interesting people,” Owens says, whose genuine liking of his subjects leads to images such as “James Hetfield Torch” that involve more than environmental portraiture, but biographical portraiture, as the personality becomes the subject. The Metallica frontman Hetfield is also zealous about working in his garage, and has a professional auto team and a car club. In this photograph, Hetfield is portrayed in his garage with a muscle T-shirt and tattoos against a paneled steel wall, and a neon sign that reads “Beatniks” (the name of his car club). With a blowtorch in hand and a protective mask propped up—the flame ironically pointed in the direction of an electric guitar on a stand—Hetfield’s face is overpowered by a smile of menacing anticipation. Even though it is entirely staged, it is remarkably personal and full of candor.

A subtler example of Owens’ portraiture is one of the popular electronic DJ Kaskade. In “Kaskade Flare,” the ambiguous icon is more understandable in this reduced image than as normally photographed—in a DJ booth dominated by lights, surrounded by masses of party-goers. Here, the bright—yet warm and soft—rays of the sun envelop him from behind, as we see a near-silhouette of his upper frame with his eyes shadowed and his sharp chin, lips and long nose glowing in light. It is an image that does not stress the intensity of the party, but a mellow ambiance that many appreciate as a quality of his signature brand of electronic music.

Corey Duffel is usually seen with a skateboard in hand, doing tricks or making obscene gestures. In Owens’ understated, yet bold, image, Duffel walks silently with hands in his pockets, head to the side, and is more pensive than boisterous. Behind him is an industrial plant that looks like an urban, apocalyptical wasteland with lights glowing in the night. The rear ground lends Duffel—in a black leather coat and tight black jeans—a persona of the urban renegade that he truly is, with no skateboard necessary to prove it.

These iconic images of iconic people become more personable in Mark Owens’ lens and bridge the gap between fan and celebrity by helping the audience understand their heroes and heroines on a personal level. As Owen sees them, they are simply “interesting people”—and these images are more a celebration of humanity than they are a declaration of celebrity.