Married to Rock, Divorced From Reality

Get rock stars (and their wives) off reality TV. Now. 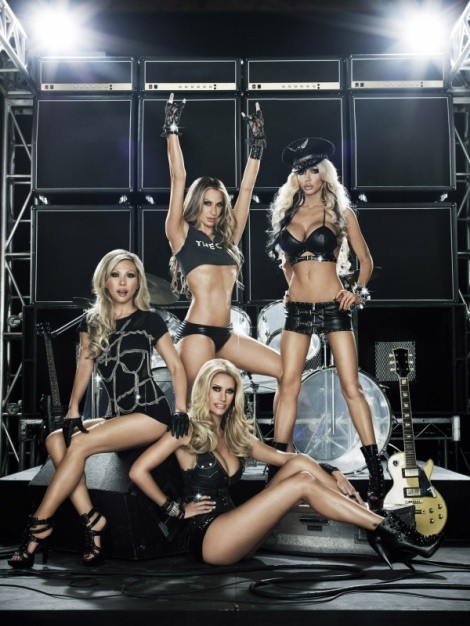 Now, we can only rely on actors like Lindsay Lohan and Charlie Sheen for such entertainment, and rock stars have become suburbanized reality-sitcom fixtures. Hell, Axl Rose could be negotiating with E! on the fine print for Welcome to the Jungle Gym right now.

It would be easy to blame Ozzy and The Osbournes for turning yesterday’s rock gods into today’s domesticated clowns; they did kick this whole rock-reality trend off in 2002 on MTV, ground zero for all things horrible and shaky-cammed. But who knew we’d go from a doddering heavy-metal basket case to the diddling hair-metal STD farm that is the Bret Michaels oeuvre? Rock of Love, Rock of Love Bus and now his just-me-bein’-real snoozefest Life As I Know It (Mondays, VH1) have done more to discredit Poison’s rock & roll legacy than Poison’s music.

At least Michaels has only appeared on a couple of reality shows: Ex-Skid Row screecher Sebastian Bach has lent his expanding mug to, like, 100—including the utterly un-rockin’ likes of Celebrity Fit Club and Gone Country. If he’d worked this hard in Skid Row, he’d probably still be onstage with ’em playing the finest state fairs and wet T-shirt nights across the United States and Canada. Priorities, Bas.

It’s impossible to accuse Kiss’ Gene Simmons of “selling out,” because he “bought in” from the beginning. Likewise, Gene Simmons Family Jewels (A&E, Sundays), the most tightly scripted “reality” show this side of The Hills, is more about moving Simmons product (he even sells life insurance these days) and promoting the spin-off brand of son Nick than “getting to know” the Demon clan. What the master plan behind A&E’s Growing Up Twisted, an ill-advised summer 2010 clone starring Twisted Sister’s Dee Snider and family, however, is anyone’s guess—why not just keep it in the Kiss Kamp and crank out Paul Stanley’s Stars & Garters?

Aerosmith segued from great American rock band to neutered commercial-ballad peddlers at the dawn of the ’90s, but even guitarist Joe Perry lost it when frontman Steven Tyler joined American Idol as a judge this year—though Perry seems to have conveniently forgotten that he himself helped toneless joke Sanjaya Malakar rape the Kinks’ classic “You Really Got Me” on Idol in 2007. You didn’t fry that many brain cells in the ’70s, Joe.

If being an American Idol judge damages rock cred, then becoming an ice-skating prancy-pants on national television kills it deader than Hanoi Rocks’ drummer (Wiki it, kids). Watching Motley Crue singer Vince Neil lurch around the ice like a sequined manatee on Skating With the Stars (ABC, Mondays) was even more painful than listening to Shout at the Devil remastered. You survived alcohol, drugs, lawsuits, Playmates, battery charges and living with Corey Feldman on The Surreal Life only to surrender your rock balls like this, Vince? Somewhere, Nikki Sixx is rolling over in his coffin—which is also occupied by a 22-year-old model, because he still has his.

The latest and lamest insult to the music/lifestyle that launched a million hairspray hangovers is Married to Rock (E!, Sundays), starring the wives of Perry Farrell (Jane’s Addiction), Duff McKagan (Guns N’ Roses, Velvet Revolver), Steve Stevens (Billy Idol) and Billy Duffy (The Cult). There’s little sadder than watching these bleached idiots lead their still-semi-rock-relevant husbands through contrived “reality” situations that were stale by the end of the first Osbournes season (though Farrell and Stevens seem a little too eager to play peripheral sitcom mooks).

Actually, A.J. Celi is Duffy’s longtime girlfriend—and, coincidentally, the only significant other on the show who seems smarter than a blow-up doll. Though Duffy’s obvious disgust for the reality cameras (or maybe just general British disgust) has been spun by Married to Rock editing as viewer-sympathy-baiting indifference toward Celi, he by default is the show’s Rock Cred King. There’s nothing more rock & roll than pissing on the corporate vehicle that’s boosting your career. Just ask Charlie Sheen.