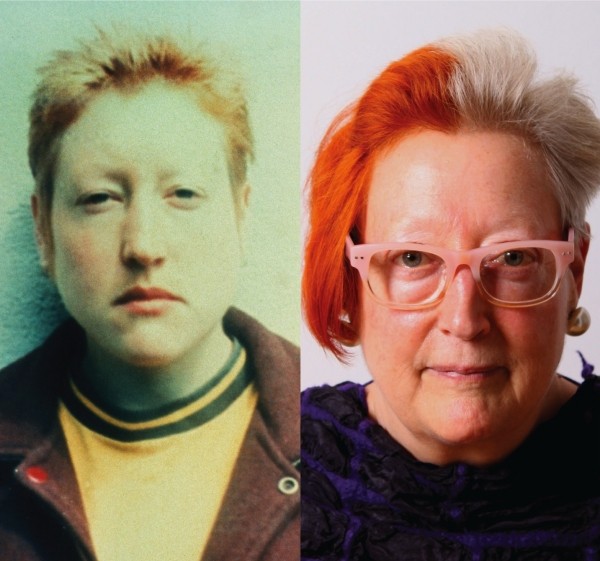 In our celebrity-obsessed culture, artists are often as much absorbed with creating a persona for themselves as with creating a body of work. The first contemporary artist to really make his persona the focus of his work was Andy Warhol; then performance artists in the 1970s and 1980s started using the medium for social and political commentary.

For four decades, Martha Wilson has been at the forefront of this movement, with her work in live performance, video and photo-text juxtapositions in the late 1970s collaborating with DISBAND—“the all-girl band of artists who couldn’t play any instruments,” as she puts it—and founding the nonprofit art space Franklin Furnace in Brooklyn. The traveling exhibition Martha Wilson: Staging the Self at the Utah Museum of Fine Arts traces the development of her work and herself as an artist.

Wilson, originally from Newtown, Penn., wasn’t even sure if she was cut out to be an artist at first. As Wilson recalls, her mentor at the Nova Scotia College of Art and Design reportedly told her, “ ‘Women don’t make it in the art world.’ He also said, but if I was serious, I should make art that was black and white; this made me mad, so I walked across the street to the drug store and bought a roll of color film. I thought what I was doing was ‘performance art’—experiments, really—to find out what the self consists of, as well as actions taken to sculpt my personality.”

The changes she has undergone in these works have been fascinating. “In ‘Posturing: Drag,’ ” Wilson says, “I tested the theory that form determines feeling by dressing up as a man who was trying to look like a woman (by applying false eyelashes, false fingernails, wig, makeup) in order to experience double sex transformation. In ‘Posturing: Male Impersonator (Butch),’ I tried unsuccessfully to ‘pass’ in men’s rooms in Halifax; the men took one look at me and said, ‘Get out.’

“In ‘Posturing: Age Transformation,’” she continues, “I explain that I was a 25-year-old artist dressed up as a 50-year-old woman trying to look like she is 25—and that this experiment made me extremely anxious because of my fear of ‘over 30’ status in society. In all of these cases, I was working with the material I had at hand—my female body.” Later on, she would take on the characters of Nancy Reagan, Tipper Gore and Barbara Bush.

An artist talk and panel discussion Sept. 18 will be a crucial part of the exhibit, as an opportunity to hear a performance artist do just that: perform, in a sense, presenting the ideas behind her work, and discussing them with scholars from the region. Whitney Tassie, curator of modern and contemporary art at UMFA, says, “This is a very important program for us. One of the things that makes the UMFA special is its connection to the university. We want to contribute to the academic life on campus with smart exhibitions that can be material for all students. The multidisciplinary collaborative potential is huge at a university museum like the UMFA. I think the panel discussion is going to generate some new ideas, and I’m thrilled that we can be the impetus for new scholarly thought.

More than just a critique of social structures, much of Wilson’s work is a critique of art itself: “What kind of art does a feminist create?” she muses. “When I arrived in New York in 1974, I found plenty of formal fights within the feminist community in New York and beyond. There were the ‘central imagery’ women who insisted that feminist imagery emanated from the vagina. There were pattern painters and sculptors who made fanciful, layered, liquid and woven works in direct opposition to angular and austere minimalist works by men. There were body artists and artists who referenced the body, performance artists who captured their work on film and in photographs and video, and those focusing on identity. Artists spun webs to show we are all connected. Plus, everyone did everything, blurring all the lines.”

In being open to all these impulses, in blurring the lines in her own work, Wilson has helped us to view these issues more acutely, making connections between these multiple personae and the multiplicities within all of us. “Forty years later, my work still concerns the self as an art medium, except I’m an old lady now—and hopefully I have learned to laugh at myself.”