Are there are confirmed occurrences of dolphin-human rape? 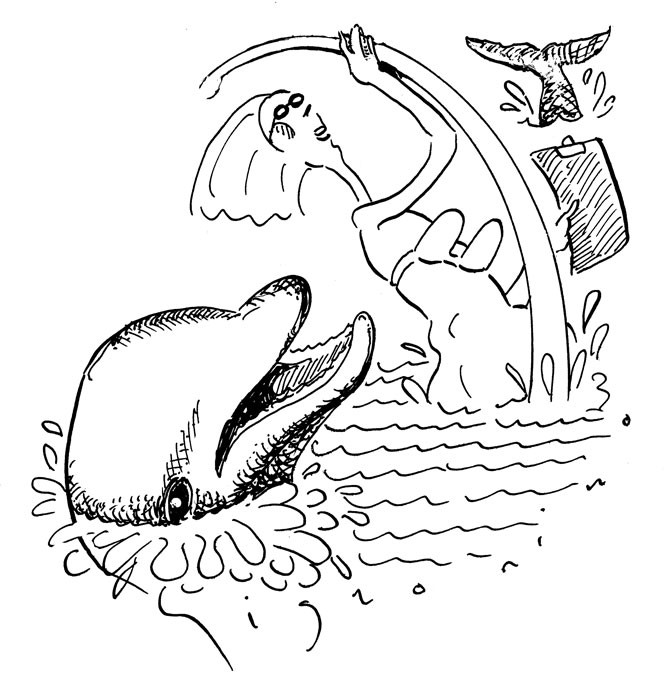 A friend of mine supposedly saw an instance of a dolphin attempting to rape a human on National Geographic. While I'm not accusing NG of faulty research, they aren't nearly the font of knowledge you are. So, are there are confirmed occurrences of dolphin-human rape? —Nate

Well ... "rape" would be an exaggeration, not to mention a questionable choice of words. However, there definitely have been cases of dolphins behaving badly.

• The National Geographic channel Nat Geo Wild aired a video segment showing a dolphin at an aquatic park jumping on a woman in a pretty suggestive manner: The dolphin pops up out of the pool between the woman's legs, flops on top of her and starts humping away, although there's no clear indication he's sexually aroused.

• But dolphins do get sexually aroused, and their sexual apparatus is such that rape can't be ruled out solely on grounds of mechanical impossibility. Evidence: a much-viewed YouTube video showing a dolphin with an unmistakably erect penis trying persistently and aggressively to nose into the crotch of a female snorkeler while another diver tries to fend the critter off.

• In 2002, authorities warned swimmers in Weymouth Harbor, England, about the predations of Georges the dolphin. "This dolphin does get very sexually aggressive," a dolphin trainer was quoted as saying. "He has already attempted to mate with some divers. When dolphins get sexually excited, they try to isolate a swimmer, normally female. They do this by circling around the individual and gradually move them away from the beach, boat or crowd of people."

• A lab assistant named Margaret Howe claims to have repeatedly allowed a dolphin named Peter to rub himself on her legs and hands while doing research on dolphin communication in 1963. She describes the relationship as "sexual on his part ... not sexual on mine. Sensuous, perhaps."

• Finally, we have writer Malcolm Brenner, who claims to have had, back in the '70s, a six-month affair with a dolphin named Dolly. Brenner, who's also admitted to sexual relations with a dog, says it was Dolly's idea. One press account says the two had "interspecies intercourse," which I gather means he rubbed himself on her. Brenner believes Dolly was so distraught after she was moved to another water park she committed suicide.

The last two examples of course involve allegedly consensual sex, and the sex in question was of the high school variety. Full-on intercourse isn't out of the question, but the challenges of human-dolphin docking aren't trivial, so something like rape in the strictest sense sounds unlikely. The fact remains that dolphins can be sexually aggressive and have been known to go after humans, creating a risk of injury or drowning.

Many would contend dolphins are incapable of rape because like all nonhuman creatures they can't grasp the idea of consent and are simply doing what comes naturally. The term "forced copulation," seen regularly in scholarly contexts, might better be used instead. Whatever you call it, this kind of thing isn't rare in the animal kingdom:

• Gangs of male dolphins may isolate a female, slap her around with their tails, and forcibly copulate with her for weeks.

• Ducks are notorious for forcing themselves on apparently unwilling females, often due to a dearth of females to pair up with. At least 38 different species of ducks have been witnessed attempting forced copulation. Possibly as an evolutionary response, female ducks are able to manipulate the shape of their vaginas to encourage fertilization only with drakes they fancy.

• Spider monkeys occasionally engage in forced copulation, but it's more common among orangutans, primarily among young adult males, leading the females to pair up with adult orangutans to reduce sexual harassment.

• During sex, the male garter snake lies on top of the female and presses down rhythmically on her lungs, preventing her from breathing. The stress evidently forces the female's cloaca to open, allowing the male to deposit his sperm.

But a worse case was recounted by Galdikas herself. While she was out in the jungle one day with her female cook, a crazed male orangutan named Gundul attacked the cook and mounted her. The women were unable to fight the beast off, and the orangutan proceeded to mate with the cook as she lay in the arms of the helpless Galdikas. Rape? No, and the distinction isn't hairsplitting. Galdikas thinks the cook, though shaken, may have viewed the incident as an animal attack, not a sexual assault, and of course pregnancy wasn't a possibility. But forced copulation, beyond a doubt.