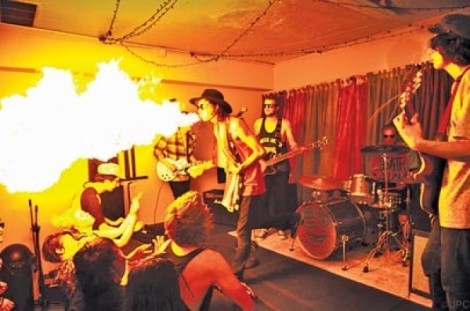 The studio at Midnight Records on Main Steet has a loose connection to serial killer Ted Bundy, but only through the local five-piece rock band Max Pain & The Groovies. This studio is the band’s second choice of locale for recording their upcoming Halloween-themed EP. The first was Bundy’s supposed Utah cabin.

“We all love spooky shit,” says drummer Troy Coughlin. “That would be about as weird and creepy as it gets.”

The idea was to record five videos in the cabin for a five-song EP to be released on Halloween on YouTube. But Coughlin couldn’t find the cabin.

He spent a few weeks making phone calls and following leads to find what he thought was Bundy’s place in Bountiful. But with no luck, finally, he concluded that Bundy didn’t own a cabin there.

“Unless it’s legit, we don’t want to do it,” Coughlin says. “I was so down to try, though. That would have been sick. Once we have the budget of Pink Floyd’s Live at Pompeii, we can record in Charles Manson’s cell or some shit.”

According to UtahAdventures.wordpress.com, the serial killer’s old home is at 115 Burr’s Lane (off of Emigration Canyon Road, past the Hogle Zoo). The house was recently demolished, but the basement remains. In response to the news, Coughlin says, “Oh, fuck, we didn’t hear about that. We should have Googled it, I guess. We’ll do that next year.” Either way, that spot probably isn’t ideal for recording.

So, three of the band members—Coughlin, bassist Jake Brimley and guitarist Dallin Smith—sit at Midnight Records two weeks before Halloween to put the final touches on Max Pain & The Spookies Live from Hell. Singer David Johnson and guitarist Shane Preece round out the band’s lineup.

Because they are short on time, and because the Bundy thing didn’t work out, they will make one fully produced music video—by Kyle Wilcox of the local band Dark Seas—and “pull some creepy clips—like scenes from Last House on the Left, the original, for sure; this plastic cow skull we want to burn, and some other shit—for the rest of the songs,” Coughlin says. The word “creepy” was said several dozen times in the 30-minute interview.

The five songs will also be available on iTunes and performed at the Day of the Dead Party on Saturday—and not before and not after, which is the odd thing about doing holiday music.

“Wait, what about that idea for a Halloween in January party?” Smith says, his only comment during the conversation. If not then, then possibly more material will come next October.

“We totally want to do one of these every Halloween,” Brimley says. “Recording this was definitely the most exciting time for me since we started the band.” He says that was because all five band members have bonded over Halloween, creepy stuff in general and the idea for this concept album since the band’s first show on New Year’s Eve in 2009.

That made the writing easy. In fact, most of the songs are only a few weeks old, and one song was played only twice before recording. Coughlin cites a Black Sabbath-esque aesthetic, with a tinge of Deep Purple, as musical influences for this release.

The EP begins with “Nut Goblin”—which alludes to the Nutcracker theme, of all things—then moves to “Skeleton's Ball,” a tight, chugging rock number, filled with guitar and bass breakdowns. “Ghouls” comes next with a guest appearance by Bad Brad Wheeler on harmonica; the chorus repeatedly chants, “It’s a Halloween.” Wheeler also plays on “Graveyard Breeze”—the EP’s best track, with its bad-trip-at-an-abandoned-circus, psychedelic-instrumental vibe. Finally, it’s hard not to laugh at the chorus of “Frankenstein,” when Johnson moans, “Frankenstein is a nasty love machine.”

Live from Hell will be the first release for Max Pain & The Groovies since their November 2010 demo EP. After, the band will have a busy end of the year. They will open for psychedelic Spaghetti Western band Spindrift at a couple gigs, including in Boise and Denver. On November 25 at The Urban Lounge, the band will release their first full-length, Tortilla Gold—also recorded at Midnight Records. On the full-length, in addition to this EP, the band’s progress and their compelling rock drive is impressive.

But, for now, graveyards and haunted houses and Ted Bundy are on their minds. “Yeah, getting creeped out is rad as fuck,” Coughlin says.