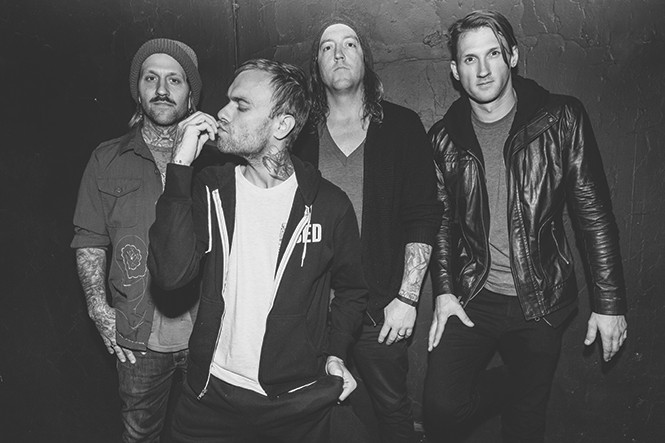 Over the past 15 years, The Used—presently including original members Bert McCracken (vocalist) and Jeph Howard (bass), along with newcomers Dan Whitesides (drums) and Justin Shekoski (guitar)—have gone through change. They've had three RIAA-certified gold and one platinum record, sold three million albums worldwide, dabbled in veganism and vegetarianism, battled addiction and homelessness, married and became fathers, and transcended the "emo" label.

Change, in this case, is not meant as the slur often used by early-adopter fans and disgruntled concertgoers. For The Used, formed in Orem in 2001, change is and always has been a matter of growth—personal and musical. "If you are not changing, you are lying to yourself. We've tried to [evolve] as naturally as possible," Howard says.

The Used's newest project revolves around the question of meaningfully bridging their past and their growth. This year, being the band's 15th anniversary, they decided to stage a special tour. "We missed the 10th anniversary, then we were gonna [celebrate the] 11th, but that just sounded stupid. So we waited [until] the 15th came around," Howard says.

The idea was that the 15th anniversary would be bigger and better in every way, a celebration of their achievements and the fans that made it all possible. At each stop, The Used will play for two nights, performing their self-titled 2002 debut album on the first, and then 2004's In Love and Death (both on the Reprise label), with, according to Howard, "one extra song each night as an encore. Maybe two, if we are feeling frisky."

Talking about those first two albums, it is with no slight hint of nostalgia that Howard recounts the life of The Used in those early days. "We rented this house and we would write in the living room, mostly because we couldn't play shows at that time," he says. "Every time we'd play a show, we'd get kicked out [because] we were too loud or somebody would get hurt. I remember some kid broke his legs and it was our fault, for some reason."

The band also had trouble getting to those infamous early gigs, especially the ones here in Salt Lake City. "We didn't really have any gas money to drive places, or a car that could fit all our gear, so we weren't really able to make it to Salt Lake [that often]," Howard says. The Used was forced to get creative with their transportation. "I [worked as] a baker and there were one or two shows where I borrowed a company van and loaded up our gear in the middle of the night." Luckily, The Used got away clean on that one. "I don't think they really noticed I borrowed it."

Eventually, their song "A Box Full of Sharp Objects" found its way to Goldfinger frontman, John Feldmann, and he flew the band to California to record that first album. It wasn't the rock & roll fantasy it sounds like. "I remember the hotel we stayed at; it was called the Jolly Roger. It's still there in Marina del Rey," Howard says. "Our hotel room had blood everywhere. All over the sheets, there were bloody handprints. And blood all over the bathroom. It was really ghetto."

With persistence, the aid of Feldmann, and few odd experiences along the way—including McCracken dating Kelly Osbourne—The Used muscled into the national spotlight with those first two albums. They've since released four more studio albums: Lies for the Liars (2007) and Artwork (2009) on Reprise, Vulnerable (2012) as a joint venture between Hopeless Records and the band's own Anger Music Group, and Imaginary Enemy (2014) on the band's new label, GAS Union. That's in addition to two live albums, several EPs and the 2003 compilation of demos and unreleased tracks, Maybe Memories.

For Howard, "The songs [from the first two albums], I don't get sick of playing at all. Because they mean so much to the fans, [they] take on a completely different meaning. These songs are way past us and above us, and that is more important." With this in mind, Howard says he greatly looks forward to his upcoming time in Utah and the reaction from The Used's hometown crowd. "This tour is very special. If you see a Used tour, this is the one to come see." And furthermore, "I would go to both nights."

April 1 marked the release of The Used's newest CD/DVD set, Live & Acoustic at The Palace, a concert recording of 12 stripped-down numbers incorporating a choir and some orchestration, and subsequently "[Something] we've been wanting to do for years, to put on a show that is but isn't The Used." Fans can also look forward to an upcoming studio album, with recording slated for early next year. "[We have] about 10 to 20 musical ideas right now, and we are looking to write more on this tour."