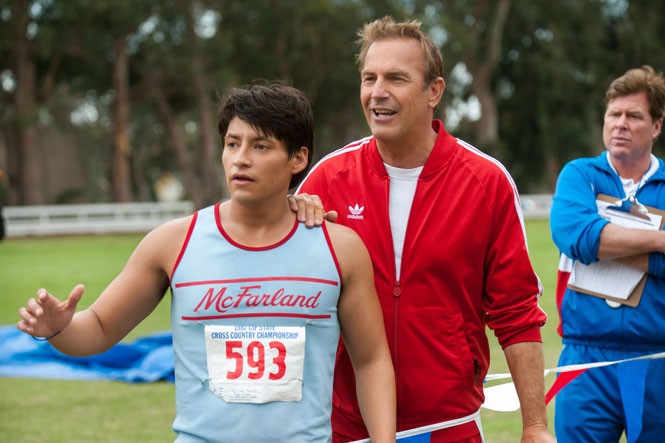 In recent years—particularly in regard to the transformation of New York City's Times Square from a locus of iniquity into a tourist-friendly hub of consumerism—people tend to wield the word "Disneyfication" in a negative context. This is, at times, unfair to the Walt Disney Corporation, whose properties include some of the finest achievements in cinema. At its best, Disney represents a kind of sanctuary where innocence and happiness prevail over all, a projection of the worlds created in their finest animated films.

The distinction of "animated films" is deliberate, as Disney's track record with live action is shakier, and its appropriation—the literal process of Disneyfication—of true stories for "inspirational" fictional films is its shakiest subgenre. In the quest for uplift, McFarland, USA stumbles rather badly in places, squandering the considerable goodwill generated by an appealing cast and somehow ending up both overlong and insubstantial.

The true story from which McFarland, USA is drawn is one of the more impressive, albeit obscure, sporting achievements in recent memory: Starting in 1987, McFarland High School's cross-country running team won nine out of 14 California state championships. This was in spite of McFarland being one of the poorest towns in the country and cross-country running being a sport dominated by those who can afford the best equipment and conditioning. It's a great story, in which triumphant underdogs conquer not only the sport, but issues of classism and racism (the team members were all of Hispanic descent)—and they (mostly) lived happily ever after.

Where the movie makes its fatal error—although the blame for this error lies not with the filmmakers, but the film industry at large—is by telling this fascinating, rich story from the perspective of a white man who just happened to be there. Jim White (Kevin Costner) certainly deserves a degree of credit for coaching his runners to success. But the runners were the ones who won those titles. And if there's one thing American cinema is not lacking, it is stories about the nobility and spiritual growth of white people, especially when it lights the way for nonwhite people. If the White Savior were the panacea movies would have audiences believe, no one on earth would still need to be saved. The White Savior is nothing more than a lie intended to make white people feel better about themselves, and there needn't be another frame of film wasted on pretending it is a worthwhile narrative framing device.

However, in terms of pure craft, if such a movie must exist, it could be a lot worse than McFarland, USA. Director Niki Caro (Whale Rider, North Country) does a visually effective, if merely serviceable, job. Although it may seem that simply pointing a camera at Kevin Costner, Maria Bello and Californian landscapes is sufficient, there's more to cinematography than that. Still, in spite of the business the script forces the characters through, Caro gets solid performances out of the cast.

But about that script business: There's the manner, recalling Costner's own Dances With Wolves, whereby he and his family experience initial revulsion toward their Hispanic neighbors—which is pungent and off-putting enough to nearly derail the whole movie before it even properly starts—only for them to fully adopt the customs of their neighbors and be forgiven for their initial transgressions. Even this is less awkward than the way the script attempts to portray the poverty in McFarland; the brutal toll of fruit/vegetable/nut-picking is limited to a couple of members of the cross-country team missing practice a couple of times, and—when Costner joins them at work in an act of solidarity—he is shown as unable to keep pace. Most offensively, poverty is portrayed as a frame of mind one can conquer simply by choice.

It's not as though the gritty Ken Loach version of this film is anything that would realistically exist in this world. And, again, it's not as though this version is without its pleasures, especially the performances of the runners and their families. But those pleasures are sadly outweighed by the queasiness imposed by the need to make everything cute, nonthreatening and neat. The real world, for better or worse, is not Disney.