A journey of heritage and personal discovery. 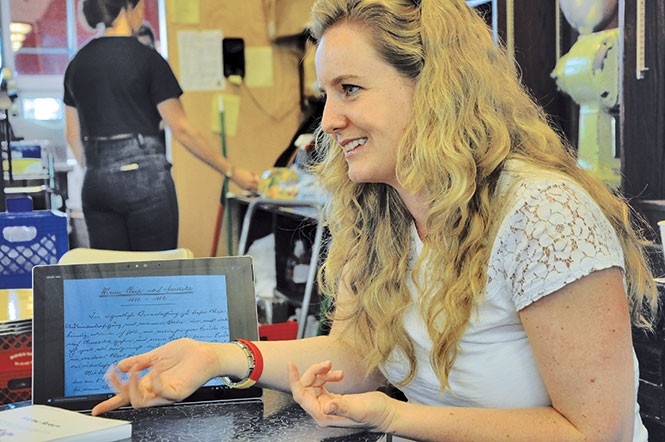 Sibylle Randoll has a mission: to follow the route her great-great grandfather took from Barmen, Germany, to various locations in the U.S. before finally returning home. Randoll was prompted to leave her Germany home after reading about this great-great grandfather from his diary, in a version that had been copied and handed out to each grandchild in her family. Currently a month and a half into her adventure, she has quite a ways to go and many things to see. It's clear Randoll has a love for traveling that was paralleled only by her respect for heritage as she spoke with City Weekly. You can read more about her journey at Explories.de.

Can you tell me a little bit about this project?
My great-great grandfather came to America in 1880-1882; he traveled a total of about a year and a half. He came to America because he had an argument with his father, and [his father] said sort of like, 'Go off and earn your money with the foreign people.' And so he did that. ... In 2012 at Christmas, I was at my sister's house, and I was bored; I opened it and I saw, My journey to America, 1880. I was like, 'What?' So basically, I read it and I have a tourism major, ... I love traveling. And so my immediate idea was, I have to read it, and I came to the Niagara Falls where he describes them, and I myself have been at the Niagara Falls in 2005 when I was an exchange student, and that's when I had the thought: He has seen this, I have seen the same thing, maybe I can see all the places that he mentions in this book. And then—well this was the first idea I had to re-travel, and this was three years ago, and here I am doing it.

What do you think you'll take with you from this journey?
Well I'll definitely take with me that I've had a goal and I've—I just did it. I dared to do something, I gave up my job to do this, I saved up money that I'm all spending now, so I'll end up back home without a job and not so much money. But I've encountered so many friendly people and welcoming people, ... and all these encounters with these different people is amazing. And just seeing the places that my great-great grandfather saw, and sitting in the tabernacle and thinking, 'He has seen the exact same thing.' Maybe not the lights that hang on the ceiling, but more or less the same thing. And that's amazing to, yeah, to feel that a little bit.

What does heritage mean to you?
I'm 100 percent German, I have two German parents, I grew up all my life in Germany, so I don't have any question of 'Where do I belong?' because I am very much German. ... Heritage is a lot about family history, your language, the customs you learned when you're little, how you see the world, it's all really who we are is because of our heritage and our traditions and how we grew up. For me, it's very interesting to see how my heritage—the German heritage—survived a little bit in the U.S. and how people still keep on to it a little bit and how it's practiced.

Do you feel like you've grown closer to your great-grandfather, to your family?
It's difficult to say; he died over 50 years before I was even born. But I've definitely encountered a lot of family history along the way. ... I'm kind of trying to imagine how grand all this was for him. The Niagara Falls—we don't have such waterfalls back home, so for him to see those giant falls for the first time must have been so overwhelming after going on this train for so long. ... I'm trying to imagine how grand that was for him. ... I wish I could ask him what this journey meant for his life, his later life, in business.

You've been taking the slower route, yes? What has that added to the experience, do you think?
It's a different kind of travel; I really felt how I'm going westward, and so I feel a little bit like a pioneer even though I'm not really a pioneer. ... Arriving in Denver and seeing the prairie and the rocky mountains for the first time, I felt like I was the first person there, a pioneer on a horseback, a little bit. I cried. I'm sitting there like, 'Oh my God, I'm moving westward.'

What's next for you after you get back to Germany?
Well, job hunt. And settling down, I think. I've lived long years abroad and was away for a long, long time. I used to move every six months. I just moved back to Germany two years ago. Since I was 17, I was just out of the country and on the go, and ... after this trip, I'll really enjoy settling down for a little bit. The first thing is going home to my parents and then applying for jobs. All this boring stuff, getting back to normal life.