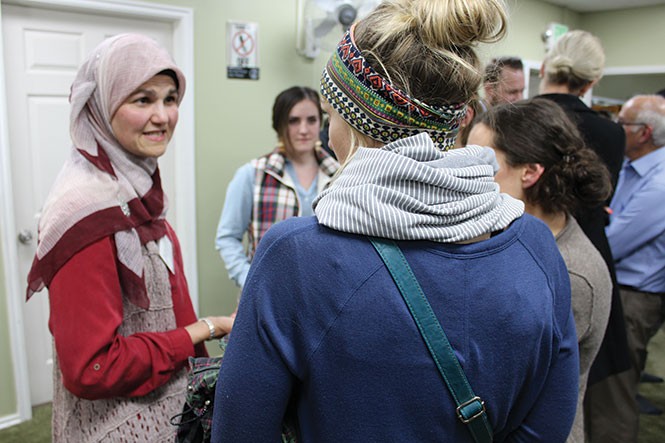 In Islamic doctrine, God's faithful follower Abraham had two wives: Sarah and Hagar. And perhaps a plural-marriage tradition is why, Shuaib Din suggested, he was recently emailed by a polygamist group organizing a march on Capitol Hill.

Din, imam of the Utah Islamic Center, retold this story to a packed room of friendly visitors on Friday night.

"No, we're not interested in that. You don't want us to be with you; otherwise, they're going to think it's for Sharia law," he joked.

So started The Islamic Center's Meet the Muslims event: Insight into the ancient prophets, infused with wit, anecdotes and exposition.

Like many impactful jokes, a sad seed of truth underlies Din's story.

In this case, he was talking about misunderstandings and fear surrounding his religion. President Donald Trump signed an executive order last month temporarily barring refugees and immigrants from seven predominantly Muslim countries.

Although Trump and his ilk say it's not a Muslim ban, by pointing to all the Muslim countries that aren't affected by the measure, opponents think this is mere bluster.

In fact, Trump said early on the campaign trail that he intended to institute a ban on Muslim entry into this country.

Worried the wrong message might be sent after the November election, many in the Salt Lake Valley began rallying around their Muslim neighbors to ensure they felt safe and welcome, Din said.

"They sent flowers and cards and emails and nice voicemail messages saying, 'We support you. We love you. You are part of our community,'" he said. "And some of them wanted to come visit us. So we thought, why not have a day when they can come?"

They call the event "Meet the Muslims"—a play on the Church of Jesus Christ of Latter-day Saint's ubiquitous Meet the Mormons campaign. These gatherings allowed non-Muslims to show their support but also learn more about a religion that is often shaped in the news by its most extreme adherents. The first open house was scheduled in November.

The popularity of that evening spurred another, and then another and another. By the time February rolled around, the Utah Islamic Center had decided to host the free Meet the Muslims night every Friday. After the ceremony, folks are encouraged to mingle over snacks, tea and hot chocolate.

This latest event started with an invocation, the final of five prayers for the day. Facing toward Mecca, the imam read a Quranic prayer in its original Arabic. Three rows of Islamic men bowed, at times prostrate with their foreheads touching the carpet.

Wishing to clear up misconceptions, Din offered a quick tutorial on Sharia, which means "The Path to Water." He prefers to think of it as guidance instead of strict law. "For most Muslims living in the West, it's the ethics, the morals, the values and how to live our lives," he said.

Beyond the penal code, Sharia outlines parameters on financial transactions, diet, marriage, cleanliness and a host of other day-to-day behaviors.

Beforehand, Din explained that many of the prophets quoted in the Quran were the same men revered in Jewish and Christian traditions. Speakers then touched on the seven articles of faith, five pillars of Islam, the hijab and women's rights.

Congregation member Maysa Malas-Kergaye pushed back against the conception that headwear is a sign of oppression.

"When you see women wearing a scarf, no one forced them to wear it. Definitely not in America—can't force kids to do anything here," she said. "Some say women in Islam are oppressed. I say, Islam never oppresses women. If they are oppressed, it's because of men. Men oppress women. God does not oppress women."

The Islamic Center ended the program by taking questions from their guests. They covered book recommendations, religious holidays, politics and Islamophobia. But the first question seemed to cut to the core of the evening: What message would you hope the visitors walk away with?

The answer: People are people, they said.