Listen to his lyrics, not his diatribes 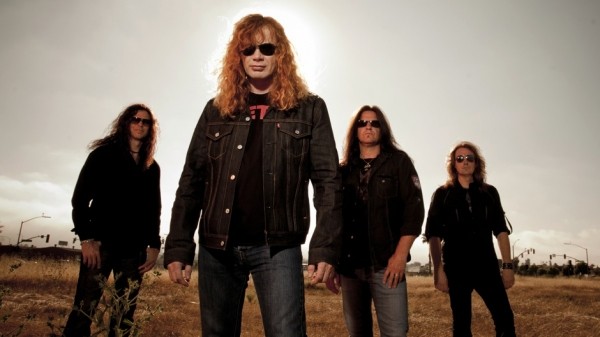 “You take a mortal man/ and put him in control/ watch him become a god/ watch people’s heads a-roll.” Megadeth’s “Symphony of Destruction” is accompanied by a portentous, chugging rhythm that could soundtrack the marching of a fascist dictator’s jackbooted minions. The chorus line rams singer-guitarist Dave Mustaine’s point home: “Just like the Pied Piper/ led rats through the street/ we dance like marionettes/ swaying to the symphony … of destruction.”

Megadeth’s 13-album discography is littered with similar songs, where Mustaine laments puppet politicians, the military-industrial complex, censorship, poverty and the environment. Dude’s a liberal, right? Despite his reputation as an angry, outspoken red-headed stepchild? This guy, whose autobiography Rolling Stone called “remorseless,” and who was unceremoniously booted as Metallica’s first lead guitarist?

Yeah, it doesn’t fit. Especially ’cause Mustaine tends to say … things. Like, he doesn’t believe President Barack Obama was born in the United States and blamed the Aurora, Colo., shootings on him. He claimed to heal a fan’s cancer with his touch, supported Rick Santorum’s presidential bid and told African women to “put a plug in it” if they can’t support their children.

So, you get Mustaine on the phone. You strongly disagree with these reprehensible stances he’s taken in interviews and onstage. But in the backlash over his comments, Mustaine told Rolling Stone he’s “learned a valuable lesson” that he should measure his words and even keep his mouth shut. This is the guy on the line right now—calm, gracious, ostensibly cheerful and reasonable. He has family in Utah, he enjoys eating at La Caille, and allows that Mormons being Mormons “doesn’t mean that affects them as music fans.”

He seems like a nice guy. Still, you wonder. Is he shell-shocked from bad press? Is this damage-control Dave? Well, let’s split the difference and talk politics as it pertains to the music, like in “Symphony of Destruction,” and see where it leads.

The song, from the recently reissued Countdown to Extinction (Capitol), is more than two decades old, but increasingly relevant as America’s corporate-beholden two-party political system corrodes. Mustaine starts by telling a self-deprecating story about going for sushi after karate lessons—“trying to be Kwai Chang Caine, you know, a white guy trying to be Asian”—and being hit by his muse. He jotted down “my metal brain corrodes” and “my head explodes,” and, having just seen The Manchurian Candidate, “Symphony of Destruction” wrote itself. The relentlessly badass song became one of Megadeth’s biggest hits, “probably more so than ‘Peace Sells’ or ‘Holy Wars,’ ” its author says. “Seeing it stand the test of time and having people around the world sing [along]? It’s crazy.”

Even crazier is how someone can write this song—and others—warning of demagoguery and corruption, then take such a seemingly left (right) turn. People change, but this comes at such a serious political juncture. It’s frightening that such wisdom can suddenly go boi-i-ing. Could we give Mustaine the benefit of the doubt and accept that he’s simply spoken without thinking? Well, consider when he does measure his words. “Symphony of Destruction” resolves like this: “The Earth starts to rumble/ world powers fall/ a-warring for the heavens/ a peaceful man stands tall.”

Is that some hope-and-change crap? It came before Mustaine’s born-again conversion—hence his views on gay marriage, et al., so it’s not a Jesus reference. Except, of course, that’s how Mustaine sees it now: potential end-times prophecy. “That’s certainly how it looks like it’s turned out … not to be a zealot or a fanatic, but …”

Here he goes off, discussing the pace that technology advances in terms of everything from modems—he does a frighteningly accurate impression of a dial-up connection—to weapons. What he’s getting at is we’re gonna blow ourselves up. Nevermind why. That’s what he saw happening 20 years ago, and it’s true. There is wisdom in Megadeth’s music, no matter what garbage comes out of Mustaine’s mouth lately. So, perhaps we should just listen to the tunes and see where it leads.