Will Power: Megamind is for Ferrell: Megamind is a satisfying adventure that’s also a star turn, even if you never actually get to see the star. 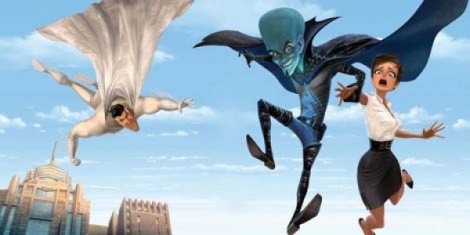 Strictly speaking, Megamind isn’t Will Ferrell’s first foray into feature-animation voice work. But let’s just pretend that his low-key Man With the Yellow Hat in Curious George didn’t really happen, because this is the performance that says, “Of course he’s the perfect fit for this genre.”

The latest DreamWorks Animation effort initially might seem a bit too similar to this summer’s focus-on-the-super-villain Despicable Me, but it’s basically a clever nature-vs.-nurture spin on the Superman mythology. When both of their planets were facing destruction, two alien babies were sent to Earth. But, while Metroman (Brad Pitt) wound up with a good family and a straight shot toward heroism, Megamind (Ferrell) landed in a prison and a lifelong rivalry with Metroman—until one of his evil schemes unexpectedly succeeds, and he has to figure out his next step.

Director Tom McGrath (Madagascar) kicks up the same kind of high-energy production that has become characteristic of DreamWorks, including the obligatory winking pop-culture references (in this case, an extended riff on Marlon Brando’s performance in Superman). But the gags are clever without being smug, and the story of someone attempting to make his own destiny is an effective shift from the “be true to yourself” hokum we seem to get by default from feature animation.

Mostly, though, it’s a terrific showcase for Ferrell. There’s more than a touch of Ron Burgundy in Megamind’s bombastic self-confidence, but he’s also effective at playing the emotional side of a bad guy who may not be such a bad guy. He works off of funny supporting performances from Tina Fey, Jonah Hill and David Cross in a way that never steamrolls them, yet grabs the spotlight all the same. What Kung Fu Panda was for Jack Black, Megamind is for Ferrell: a satisfying adventure that’s also a star turn, even if you never actually get to see the star.