Menomena at The Urban Lounge

Three-headed monster: Menomena is a band without a frontman. 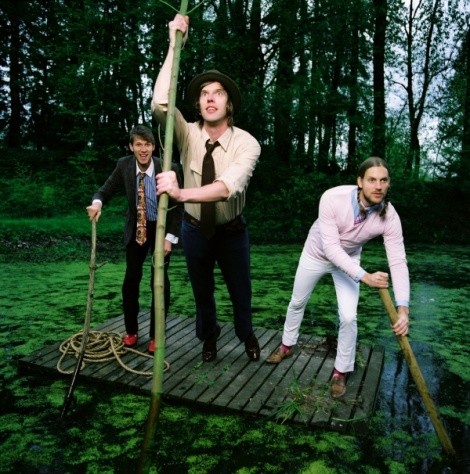 Most bands fall under the musical direction of a leader. It’s more efficient to have a single figurehead directing the band, vetoing bad ideas and developing good ideas. Imagine a film without a director, or a symphony without a conductor. Granted, there has been a recent resurgence of bands with multiple singer/songwriters, but the majority of bands tends to have one primary leader who plays the largest role in the band’s direction.

That is not the case with Menomena.

Menomena consists of three core members, each of whom is also a leader in his own right. Multi-instrumentalists Brent Knopf, Justin Harris and Danny Seim are the three-pronged administration of Menomena, each singing lead and harmony vocals in addition to jointly creating the music.

“All three of us are of equal say,” Harris says during a phone interview. “We equally contribute to the songwriting process and the recording process.”

They call themselves a democracy on their website. Harris chuckles at this. “Our democracy is a hyper-democracy,” he says, “and it’s not always the best approach.”

In a democracy, issues of concern are brought to the members and a vote is held. Typically, when a line of action is voted for, it occurs. But if your democracy consists of three presidents who each have a say on any given decision, progress can be stunted, or it can go in three directions simultaneously.

“Oftentimes a vote doesn’t lead to anything,” Harris explains.

Imagine a car with three steering wheels. The creative process can take much longer with three equally creative and influential minds invested in it.

The band’s most recent album, Mines, took more than two years to record. It was originally supposed to be released in early 2009, but Menomena took their time. “A lot of the recording we do is multi-track,” Harris explains. “On this album, I recorded a lot of my parts at my house, Danny recorded his parts at his house, and Brent did his parts at his house.”

Each of the members of Menomena seem to want their own space and time alone with the music to move it and direct it without interruption or dissent from the others.

After the music has been pushed and directed in multiple directions by each member, a final mix is, somehow, agreed upon. Mines was finally released in July 2010, and Harris is happy with the results, saying, “Sonically, this album sounds better than our previous ones.”

The creative process may be tedious for the band, but the three-headed-monster approach is what makes Menomena one of the most interesting bands around.