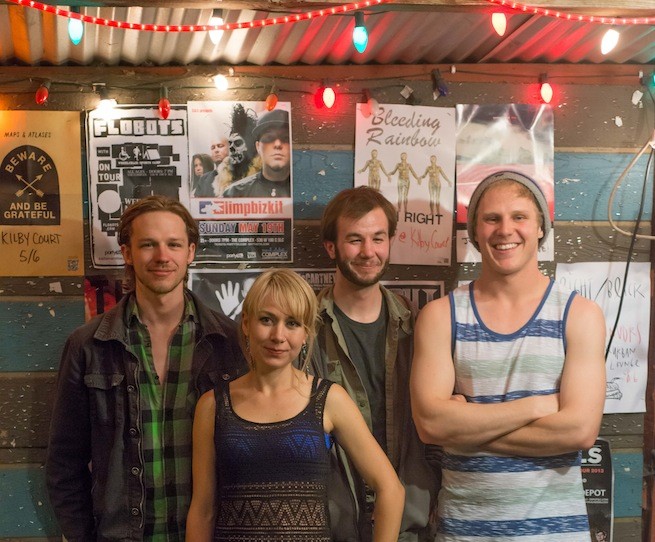 While some new bands choose to find their sound by getting into the studio right away to record that first album, Salt Lake City rock four-piece Merchant Royal took a different approach.

The band might have gone into the studio in 2013, but soon after, they put their noses to the grindstone and took on a rigorous performance schedule, remaining so solidly booked that they didn't have time to complete an album.

"As we finished recording, we started getting a lot of shows before we even released a CD, and then that just kind of snowballed into more and more performances," says bassist Kevin Schultz. "And then the recording became second priority, in a way, while we got all that figured out."

But that's how they wanted it. Merchant Royal felt it was better to get their name out there before releasing an album, versus trying to present a CD to an audience that wasn't familiar with their music. Plus, all those hours spent onstage "gave us a chance to develop our music and our sound a little bit more," says lead vocalist Christina Manteris.

After sitting on their recordings for a year, Merchant Royal—named for a treasure-laden ship that sank off the coast of England in 1641—is finally releasing their debut album, a self-titled EP that encapsulates the band's early days. Most of the five tracks were written by Manteris and guitarist Ryan Arnold during a burst of creativity in summer 2012.

"When Ryan and I first got together, we didn't work very much, and it was during the summer so we weren't in school, so we literally practiced all the time and we were just writing songs," Manteris says.

The five '60s- and '70s-influenced tracks featured on Merchant Royal are bluesy, slow-burning rockers, with Manteris' brassy, soulful pipes rising above pounding drums by Jake Gloschat and brawny guitar riffs. Manteris tends to be inspired by "normal life" when writing lyrics, and that's especially true on "North Canyon Road," which she says is about a "shithole" apartment complex she used to live in that came with neighbors who "were just a trip to live around."

For Merchant Royal, the album-release show is a "culmination" of their past gig-heavy months. Once Merchant Royal is out, the band is taking some time off from performing to write and scheme.

The past year "seemed like a rite of passage, a full year of a lot of performances and then release your first CD," Schultz says. Now it's time to "hibernate, figure out what we want to do next."