An empty Gateway storefront views the horizon from a unique artistic angle. 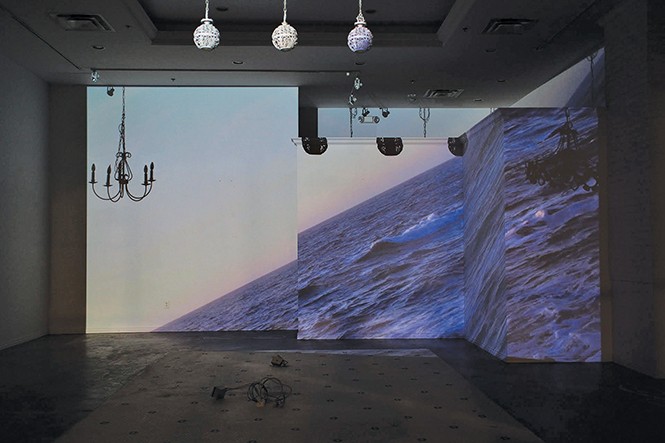 The shopping mall has been, for the last half century or so, the landscape of consumerist fantasy. The massive, homogenous retail centers perfectly represent French philosopher Jean Baudrillard's concept of the "simulacrum"—the simulation of an object or environment that doesn't exist in the real world. In the 21st century, however, this environment is being transformed by social and economic changes—including online shopping—and what it's becoming isn't exactly apparent yet.

One downtown project may provide some clues. Local photographer/video artist David Baddley has created a simulacrum of sorts in his video installation "Garrapata Diagonal," part of the Art Shop Project at The Gateway, in which local artists were given the windows of vacant storefronts in the mall to use as blank canvases for their art. The video installation, which loops continuously, is 10 minutes of diagonally shot footage of the ocean at Garrapata State Park, near Carmel, Calif. It's projected on the back wall of the storefront, located southwest of the mall's fountain, and curves around store walls, where chandeliers cast shadows.

Baddley explained the project in a conversation with City Weekly at the site of the installation. "I was really attracted to the idea of projecting an image from nature onto, or appropriating, a vacant space," he says. "The walls and decorative elements are an important component of the work."

The Westminster College professor has exhibited photography widely, but in recent years, branched out into video work, and this is part of a series. "The longest line you see in nature is the horizon, but when you look at a photographic image, the longest line is the diagonal," he says. In a work in which no human presence is seen, the tilt is a reminder that the image was created by a human with a camera, and only really exists in the eye of the viewer.

Watching the rhythmic ocean waves repeat their sequence on an angle, you feel like you might fall off the edge of the earth. Looking through the window has you looking west, in the same direction as the footage was shot just as dusk was settling in, and it's somehow both soothing and menacing. All other works in the project use just front window displays, but to see this decontextualized video sequence filling the space of an empty retail space is slightly unnerving.

The California of Carmel and other seaside spots were the end of the American frontier—the imperative to "go West." That exploration found us by the 1960s, the height of shopping-mall culture, turning inward (think of the Mad Men finale). This chapter in the saga of shopping malls and our consumerist society involves empty storefronts, and can't help but feel slightly dystopian, like something out of a J.G. Ballard novel. The wiring, bursting through floor tiles, resembles a wild, undeterred plant.

Bergendi Hatch—creative director for Vestar, the management company that purchased the Gateway a year ago—says the project is part of the company's plans to revitalize the venue. "We're transitioning from the regular 'mall' concept into a spot that's more community-driven, more activated, and more specific to urban Salt Lake City," she says. "One of our primary goals with the next phase is to distill some of the best, most unique parts of the city into one downtown, always-on hub." Public art planned for the property might include everything from performing arts to murals, scultpure and digital art.

Baddley's visual commentary on this space is purposely short on narrative. You might think that Vestar's strategy is a concession to City Creek Center in the retail arena, but it's also a bracing attempt to actually "think different"—once a slogan of Apple, a retailer who left for City Creek. Technology has to some degree reinforced a sense of alienation in our society, but maybe here it can help turn us back to nature and community.