Hard Ride: Mestizo’s Terry Hurst bikes to build a permanent art center and museum on the west side. 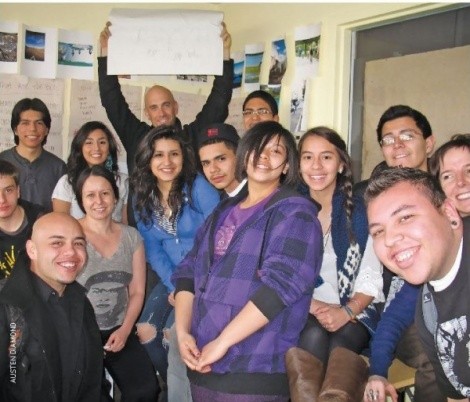 Lately, there are too many tomorrows for nonprofits and outreach organizations left empty-handed chasing their missions in a dwindling economy. In fall 2009, the west side Mestizo Institute of Culture and Arts’s volunteer-run board was struggling to pay for supplies like lightbulbs—let alone loftier goals—when Terry Hurst decided to take matters into his own hands.

Hurst, co-founder of MICA along with his wife, artist Ruby Chacon, is an ordinary middle-age guy. So when he decided to fundraise by touring the West on a bike, people were intrigued, to say the least. His goal: to raise $5 million to buy and green retrofit a building to house MICA’s community art center and museum.

MICA was relaunched in 2008 after a sixyear hiatus to give artistic opportunities and a voice to the Latino/Hispanic community, and the west side as a whole. Furthermore, the institute wants to be a bridge from Salt Lake City’s east to west side.

Hurst says MICA’s relationships with big donors are a few steps farther removed than those of east-side nonprofits. “MICA has to go to greater lengths and be more creative to achieve their goals,” Hurst says, so he left on Sept. 23, 2009, and traveled by bike as far north as Seattle and then down to San Francisco to raise funds, a dollar at a time. MICA created a Website, Bike4Art.com, where people can buy a pixel of space for $1 to help assemble a mosaic. Once all pixels are sold, the entire mosaic will be revealed.

“It’s not just arts for us; it’s about survival. The consequences we deal with are very real—like young, brilliant minds going to jail. We want to intervene, to turn the trajectory that people outlined for them. Other arts organizations aren’t confronted with the same realities.”

Adam Price, executive director of the Salt Lake Art Center, agrees that it’s a difficult time for art centers in this economy. His art center takes a more traditional approach to fundraising—annual events, selling artwork, seeking grants. Regarding Hurst’s bike ride, Price says, “I haven’t heard of anyone else going to that length. It’s almost necessary.” Both Hurst and Price agree that arts nonprofits provide the glue that keeps the fabric of the city together.

MICA’s desired building would house a museum—similar to the current Mestizo Coffeehouse gallery— and offer expanded programming. “We’re being asked to do lots of programming, and it’s growing quicker than we really can keep up with. We’re focusing on stuff that’s driven by the community,” Chacon says.

On Wednesday evenings, the air buzzes with creative thought from Arts and Activism’s think-tank-like meetings. Because of MICA’s mission with giving the youth a voice, this program is its most important, Chacon says. University of Utah professors Cait Cahill and Matt Bradley join Chacon—all three are on MICA’s board—to mentor and facilitate four youth groups. The projects are driven by the concerns of these youth. One group is researching pollution and its effects, the results of which will be represented in a mural; photos and sketches are tacked on a work-board, as a rough draft. Another group created a blog providing resources for undocumented students who want to attend college. Another has gathered information from surveys and community interviews to help inform MICA’s strategic planning of the art center.

Finally, the media team is creating a movie depicting how youth of color are represented in the media, often unfairly. “It’s not every day you get to be active and have a window to speak out and be supported. We want our voice to be heard,” says Yamila Martinez, a West High School student.

Salt Lake City Councilman Stan Penfold visited MICA several weeks ago to begin to foster a dialogue with the city. Particularly impressed with MICA’s youth program that creates art with lowrider bicycles, he says that taking what is often considered “bad behavior” and turning it into art is important for youth. Penfold also sees MICA’s fundraising challenge: “There’s this unfair assumption about art when it comes to youth and these programs. It challenges what art is,” Penfold says.

So far, Hurst’s efforts have raised $26,000, which allowed MICA to stay afloat through the winter. “Easy come, easy go. But, the more I did this, the more I thought that it was really possible,” Hurst says. He returned from the trip in December 2009 to help with MICA administration issues. While preparing for his next jaunt, he’ll be writing a book about civic engagement, DIY fundraising and youth outreach. He says the book will open doors nationwide to public speaking. When it’s published, he and Chacon will hit the pavement and ask anyone they meet for a dollar, until they reach the lofty goal of $5 million.