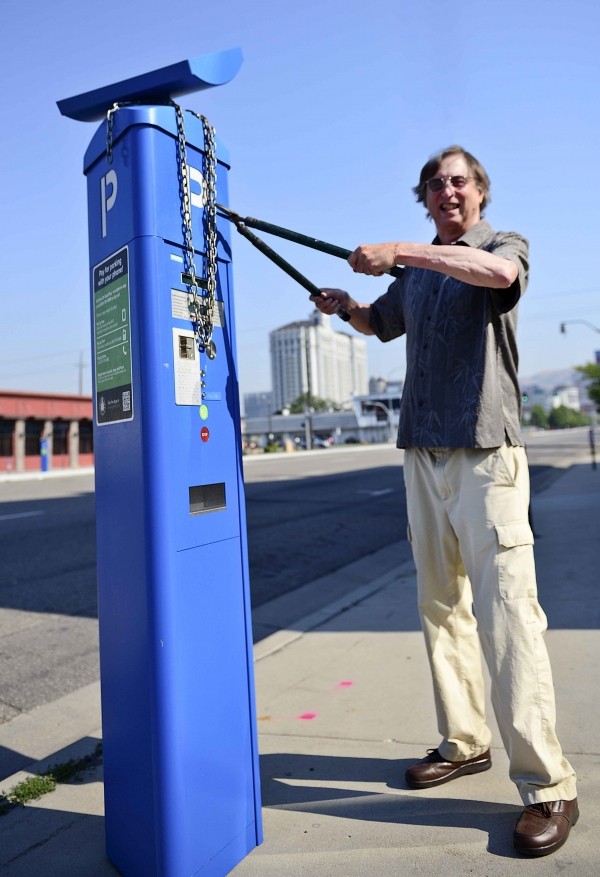 “I think it’s kind of gross to pollute the neighborhood with political lawn signs for three or four months at a time,” says Clow, who won’t be putting up his signs until right before the election.

The 66-year-old retired public-services employee isn’t much into campaigning, and his contributions are pretty thin, but he’s fueling his run for the council spot covering the Avenues and part of the Capitol Hill neighborhood with his white-hot angst over the city’s ubiquitous blue parking meters.

The meters, he says, have scared off residents from enjoying downtown Salt Lake City, especially since the city decided in 2012 to extend the metered parking hours to 8 p.m. Monday through Friday.

“It’s just really bugged the hell out of me,” Clow says. Clow, a decades-long resident of the Avenues neighborhood, says that limited public transit means that he and his neighbors have to drive and fiddle with meters to enjoy downtown. But it’s more than just the inconvenience, he says—the parking meters seem to be illustrative of how easily a city can screw up something as dynamic and charming as its downtown.

“I like that the meters are solar powered, and I like that they take credit cards and smartphone apps. I like that we have light rail that will pick me up from the airport and drop me off a half block from Junior’s [Tavern]—that’s wonderful,” Clow says. “But we have all these great ideas and great things going on downtown, but none of it works.”

For Clow, the meters are the perfect example of the city’s dysfunction. The meters “aren’t really making our lives better, but they are making them more complicated and expensive,” he says.

The city’s much-vaunted new blue parking meters brought convenience to downtown parking but also ushered in increases in parking rates and metered hours for the city. According to Salt Lake City Mayor Ralph Becker’s recent budget, parking meter fees from fiscal year 2007 to fiscal year 2011 stayed between roughly $1.4 million and $2 million, but in fiscal year 2012, jumped to $3.2, a number that’s expected to be roughly the same for the coming fiscal year.

Prioritizing the short-term gain of parking-meter revenues over the long term loss of business to downtown is the kind of thing Clow says happens when a bunch of “artsy fartsy” liberals are put in charge of the city.

He points out that Avenues residents have more trouble enjoying plays, restaurants and bars in downtown than a person from the southern end of the Salt Lake Valley, who could drive to a free park and ride and take public transit right downtown. He says the lack of evening UTA service to his neighborhood stands in contrast to other perks the city has going for it.

“There’s not a lot of deep consideration of the implication of many of these things,” Clow says. “For example, it’s wonderful to have TRAX run from downtown to the airport, but if you can’t get home afterward, what use is it?”

Art Raymond, Becker’s spokesman, disagrees with Clow’s assertion that the extended parking-meter hours hurt business. Raymond argues that the change was meant to encourage turnover in parking downtown so that restaurant workers or people attending concerts wouldn’t simply leave their vehicles in one spot the whole evening.

“It’s primarily a tool for businesses,” Raymond says. As for the fare increases, he says they are on par with other cities similar to Salt Lake City.

“It’s a change and it’s an increase, but if you look around, it’s a nominal fee by comparison,” Raymond says.

Clow says he’s always been politically and socially conscious, something that came with going to the University of Utah during the ’60s and ’70s, when college campuses around the country were awash with different groups—black separatists, anti-war protesters, feminists asserting their rights and views. But time has given the former hippie some conservative thoughts on how things like parking meters hurt downtown business.

“I have probably more a radical’s perspective, but also since I’m older, I have strong conservative feelings about many things,” Clow says. “It’s complicated.”

Still, Clow says, he’s not solely a single-issue candidate. He wants to advocate for tennis courts in the Avenues to be cleaned up and taken better care of, and is also opposed to projects like the new Utah Performing Arts Center, a multimillion-dollar project that he sees as being borne out of an “edifice complex” of Becker’s.

An avid bicyclist, Clow thinks the placement of bike lanes on busy streets like North Temple is a public-safety concern, when the city could simply place lanes on adjacent streets that don’t have as many motorists.

“I just worry about the people on bicycles,” Clow says. “This isn’t Amsterdam.”

Despite other issues, Clow’s focus is squarely on meters. Even when asked about his opponent, incumbent Stan Penfold, Clow’s assessment is blunt.

“He’s a pretty good guy—except he voted to extend the meter hours, so he’s got to go down,” Clow says with a laugh.

Clow is realistic that meter revenue would have to be replaced, but he says the city shouldn’t be so afraid of using taxes instead of fees.

“I think we have this ‘Tax is a dirty word’ mentality, but we all want services,” Clow says. “I think it’s just more honest to have a tax increase than to just keep nickel-and-diming people on fees.”