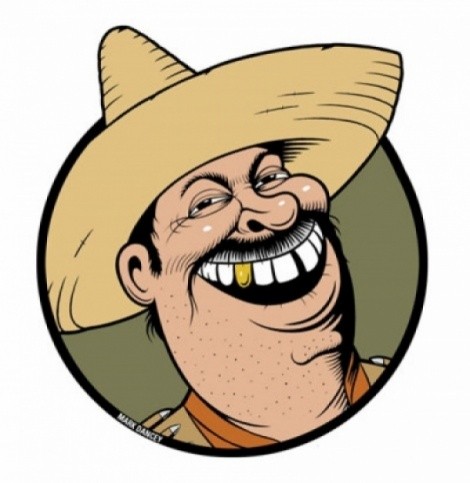 Dear Mexican: Why does every Mexican rap/hip-hop song always contain the lyrics, “No paramos,” “Nunca paramos,” or some other logically equivalent statement (e.g. “Siempre avanzaremos”, “No acabaremos de seguir,” etc.)? Can’t you people be more original? I mean, come on! It’s not like you all speak a language that makes rhyming particularly difficult, and I’m sure at least one of these barrio-dwellers-turned-rap-star millonarios could find a diccionario de sinónimos and say something more inspired than what I hear repeated on every pinche track. If not, will you please buy one for them? You’re a writer. You’ve got to have one, right? —Dando los Puñetazos a Mis Niñitos.

Dear Child Abusing Gabacho: You’re criticizing the wrong culture. It’s hip-hop, not Mexican culture, that has made “No paramos” (“We don’t stop”) a cliché of the genre since “Rapper’s Delight.” And the same music form has historically offered lyrical pats on the back for its listeners, whether black or brown or working class, by preaching advancement, solidarity, pride, and activism. They’re leitmotifs, son, just like how all Ramones rip-offs shout “1-2-3-4!” or heavy metal bands growl whether in Norwegian or Spanish: simple gestures that signify more than their literal meaning and tie them into a long tradition. People: Just because Mexicans do something doesn’t make it Mexican! Context, cabrones: CONTEXT!

Dear Mexican: My novio is Mexican, born in Mexico City. He tells me that in Mexico, women are supposed to propose marriage to men, not the other way around. I don’t believe him. Is this true? —Girl Around B-Cup, Alta, Chula and Awesome!

Dear GABACHA!: Doesn’t he wish! In Mexico, the prevailing way to propose marriage remains having the parents of the groom accompany their son to visit his querida’s parents so they can pedir la mano of the chica—ask for the girl’s hand in marriage. It’s a tradition steeped in treating women as chattel, as property—but even the most progressive Mexis still do it, because it’s quaint and also understanding of how marriage involves families and community, not just two individuals. Your guy doesn’t want to go through the process? He’s either scared, a coward, or really a Guatemalan.

GOOD MEXICAN OF THE WEEK! Is actually a Guatemalan: Ruben Vives, the Los Angeles Times reporter that helped the paper win a Pulitzer Prize for its investigation of the Southern California city of Bell, a town so corrupt you’da thunk Irishmen ran it. Vives came to this country illegally as a seven-year-old, and would’ve been a DREAM Act student if not for Americans who jumped through bureaucratic hoops to legalize his status. What a wonderful chinga tu madre at the Know Nothings of the world who insist illegals can’t make anything of themselves in this country! What a glorious toma, guey to those who say Latinos bring the corruption of their homelands to the United States and endorse it! What a beautiful arriba to those of us who know undocumented youngsters can and do make something of themselves in this country—if only they have a chance! Gracias, Ruben, for reminding America what those who come into this country illegally are capable of. In honor of your monumental victory, I will no longer pick on Guatemalans in this column, even for satirical purposes: your people have finally, truly made it in this country, and in these days of people bashing illegals, I need to direct my barbs at them and not our former vassals. And for the haters who’ll inevitably whine about Vives’ former illegal status? Welcome to the new normal, pendejos.