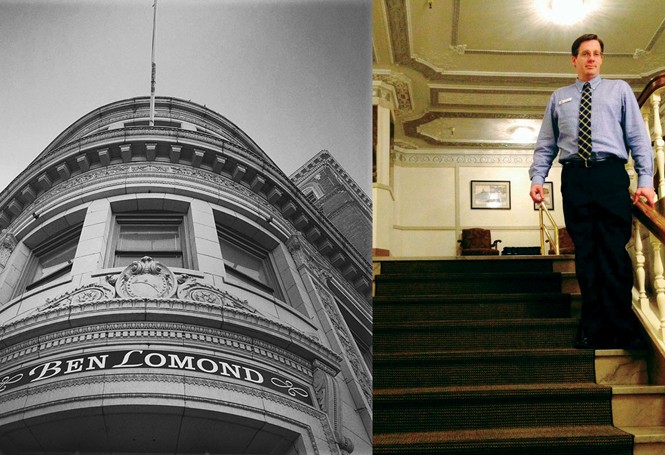 October is busy at Ogden's historic Ben Lomond Hotel, where the curious come for a frightful night's sleep (or wakefulness). Built in 1927 on 25th Street, the hotel (2510 Washington Blvd., 801-627-1900, BenLomondSuites.com) is known for being haunted, and also boasts a roster of VIP guests who stayed within its original art-deco ceilings and walls: John Wayne during the premiere of The Searchers at the Orpheum Theater next door, Louis Armstrong after being rejected in Salt Lake City, and Al Capone, who said Ogden was "too rough of a town." Michael Fenton, sales director of the hotel (pictured), is now working to restore Ben Lomond to its previous grandeur, and is an expert on all the tales of other long-deceased guests who seem to have never left the building—and keep the hotel buzzing between summer festivals and ski season.

What's the history of the Ben Lomond Hotel?


It was a hotel built on the successes of the 1920s. When it opened it was roaring, and carried on for decades. Ben Lomond was the real hotel of Ogden. You had these other hotels on 25th Street, but if you had any money, you stayed here.

What is the significance of Room 1102?


The story is that a bride in Room 1102, who drowned in the bathtub, still haunts the room. So people book it a lot. It's also still a "romantic" honeymoon suite. It's ridiculous. It's the ugliest room in the hotel. It has a big, jetted tub in the middle of the room and a small little closet with a toilet. People either love it or hate it.

Is the ninth floor really haunted?


There's a floor that's not used, but it's not because of ghosts. The previous owners were converting rooms into condos and went bankrupt on the ninth floor. It has since been gutted back to nothingness, so you can't use it, and it's been blocked off.

People can really freak themselves out. One guest was chased away because everything was haunted for her. The elevator opens by itself. All the elevators are from the 1960s and have a mind of their own. It's not so much that there's a ghost riding an elevator as much as it is the quirkiness of an old elevator that needs to be replaced.

Do ghost sightings happen all year?


Yes, but in October we have more strange things that happen. Something on a table will end up on top of the bed. A bed will be made, and when someone goes to get in it, the sheets will be all weird. People come out of the woodwork to stay here in October. Sometimes people get so curious they'll get into storage and equipment space, and break padlocks to get in and try to see something.

Who is Mrs. Eccles?


Mrs. Eccles stayed here while her husband Marriner Eccles, owner of the hotel, did a lot of traveling. She stayed until her death, even after the hotel was sold, living bedridden upstairs on the 11th floor for 10 years. Nobody ever saw her, but they knew she was in the building. People claim to see her ghost all over, but the 11th floor is notorious for it.

One of the more recent stories is the cats on the 11th floor. The old ladies that lived on that floor had lots of cats, and some people see cats that disappear up there.

Do you believe in the hotel ghosts?


They're fun. That's about it. I worked at the Egyptian Theater where Allison the ghost is, who everyone knows. Over here it's Mrs. Eccles. There are still people who talk about smelling lavender on the elevator, which is suppose to be Mrs. Eccles's perfume. I personally don't believe the ghost stories, but I've started to wonder in recent years. Every time we try to sell the hotel, the elevator goes down. There's not a way for an elevator to just go down, there's safety procedures. Legend is, Mr. Bigelow [owner of the hotel before Marriner Eccles] moved to San Francisco and died a pauper, but my feeling is he never left the hotel.