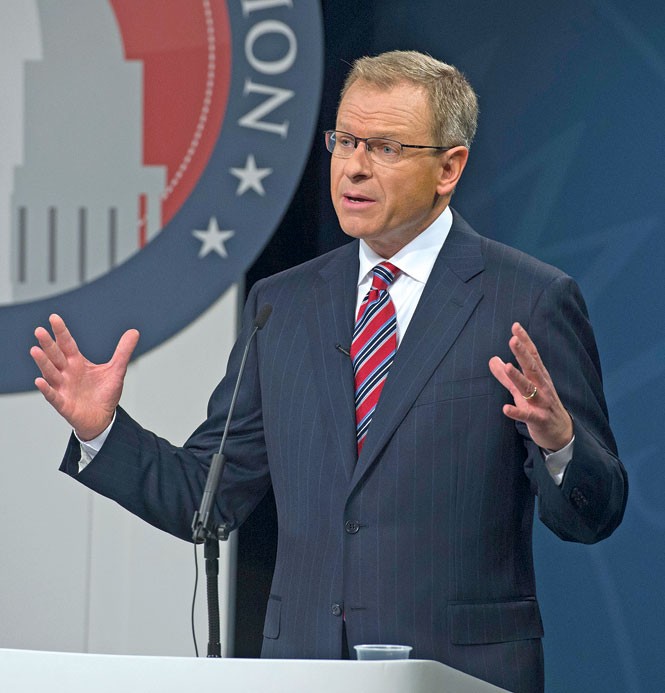 "I was 9 years old," Owens says without blinking. The year was 1972, and on weekends, he would join his father as he walked the congressional district that he would win in his first race. For Wayne Owens, it was a journey of 711 miles, knocking on doors and meeting constituents; for Doug, it was a chance to see his father proselytize for the democratic process and to explain that the "government can be used to help people."

Wayne Owens served in Congress from 1973 to 1975 and again from 1987 to 1993 as a proud Blue Dog "Utah Democrat." Now, with Rep. Jim Matheson having decided not to run again, Doug Owens hopes to represent Utahns in D.C., as a moderate Democrat.

"There's a real big difference in me and my opponent on this," Owens says of Love, who has raised the lion's share of her campaign funds from out-of-state donors and, Owens says, has "made tens of thousands of dollars in speaking fees out of state, and is going to be pursuing a national partisan ideology. I'm going to be putting Utah voters first."

Love politely declined to be interviewed.

Owens' Blue Dog credentials extend beyond working on his father's campaigns—he's also moderate when it comes to issues like energy and corporate taxes, and worked as an attorney who frequently represents companies against legal complaints from environmentalist groups.

There's definitely a very liberal slice of the 4th District that might not find comfort in Owens' legal experience, but for Owens, it goes to show exactly how he can bridge the divide and resolve complicated issues. One of Owens' major victories was beating back a citizen suit led by advocacy groups such as the Sierra Club against the Tooele Chemical Agent Disposal Facility that said the contractor was being unsafe with chemicals and sought to revoke its permit.

"We showed that it was being safely operated," Owens says, pointing out that the facility helped destroy roughly half of the nation's stockpile of chemical weapons before it was decommissioned in 2012. His legal experience, he says, has taught him to balance the needs of the environment against jobs.

"Utahns love the environment, we love where we live and want to take care of it, but we also need good-paying jobs for people so they can take care of their families," Owens says. "So you need someone who has good sense and can see both sides."

Owens' positions are centrist on other points as well. He believes the country's corporate tax rate should be reduced by at least a third—with unfair loopholes also closed. He also supports an all-of-the-above approach to energy development that includes oil, gas and nuclear.

"I'd be in favor of more research and development for renewables," Owens says. "But for the time being, we're not where they can solve all of our needs."

While Owens can agree with his conservative opponent on some points, their biggest difference, he believes, is in how they would solve problems—with Owens hoping to act as bridge-builder versus a bridge burner. He points to Love's drastic measures, such as calling for the elimination of the Department of Education in her first campaign, and her desire that the government stop subsidizing student loans, even though she used assistance to pay for her education.

Owens says he wants to reform but protect the student-loan system, which more than 80 percent of Utahns take advantage of, and also supports early-education efforts like HeadStart and all-day kindergarten. He sees education as a major issue that will have tremendous effects on the economy by providing an educated workforce.

"Education is items 1, 2 and 3 for me in terms of importance," Owens says.

While Owens is trailing in the polls and being outspent by Love by a factor of almost 10 to 1, he believes that when voters recognize that, like his father, his focus is on Utahns and not on partisan politics, they will look past the stigma of the D next to his name.

"The party label can be something of an obstacle to a Democrat," Owens says "But it's not the end of the discussion."