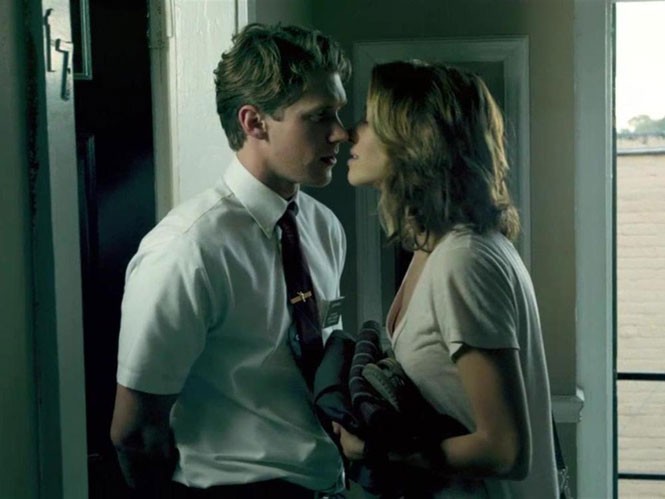 When I learned that there was a film about a Mormon missionary who sleeps with and then stalks a married woman, I thought: "Who stole my diary?"

I kid, of course. If I'd done anything that bad on my mission, I wouldn't have been foolish enough to write it down. But the film, a low-budget indie called Missionary (available through video-on-demand since Oct. 31), intrigued me.Having served an LDS mission myself (Philadelphia, 1993-95), I was curious how accurately it would depict missionary life. Mostly, I wanted to know where his companion was while he was gettin' it on. To prevent the gettin' of it on is largely why missionaries have companions in the first place.

It turns out the movie isn't very good, but not for reasons of accuracy. It belongs to the genre of preposterous thrillers about deceptively friendly psychopaths who terrorize others—a genre full of mediocre potboilers.In this one, handsome Elder Brock (Mitch Ryan) and dorky Elder Whitehall (Jordan Woods-Robinson) meet Katherine (Dawn Olivieri), a hot Florida mom currently separated from her husband. She doesn't need religion, but her son needs someone tothrow a football to him, so Elder Brock does it, briefly becoming a father figure to the boy and causing me to imagine a sitcom called Elder Dad.

A few days later, by pure coincidence, Katherine drives past Elder Brock walking by himself. Seems he and Elder Whitehall were each working with local LDS men for the day (this is called "going on splits") when Brock's guy had a heart attack and was whisked away by an ambulance, leaving poor dumb Brock on the side of the road, helpless.(He could have ridden in the ambulance as clergy, and missionaries do have cell phones nowadays, but I'm going to allow this scenario as plausible.)

Katherine offers Brock a ride home. He declines because it's against the rules to be alone with a woman. Then he relents, figuring this is an unusual situation, and surely one car ride won't lead to WHOOPS they had sex! That slope was very slippery for Elder Brock.One minute he's a stickler for the rules, the next minute he's engaged in sensual cinematic lovemaking (not panicked, furtive sex, like it would actually be).

Then we find out Brock is kooky in the head, wanting to make Katherine and the kid his "celestial family." When she reconciles with her husband,Brock turns into a dangerous stalker who cites LDS doctrine and quotes from his patriarchal blessing to justify his increasingly violent actions.

For Mormons, the kneejerk response to all this might be offense—first at the very idea of a psycho missionary, and then at how lightly the film treats things that we consider sacred. But I think it's telling thatdespite several instances where it would have been realistic to show them,the film almost totally ignores the subject of temple garments. If the filmmakers wanted to ridicule Mormonism, they had plenty of chances.

No, this isn't a movie about how Mormon doctrine is crazy. It's a movie about a crazy person who happens to be Mormon, a psycho whose particular brand of psychosis involves Mormonism.There's no attempt to suggest, even by implication, that Elder Brock's actions are what practicing Mormonism leads to. There's no agenda here, no ax to grind.

One of the two screenwriters, Bruce Wood, was an LDS missionary; that explains why so many of the details of the elders' day-to-day lives are so accurate. On the other hand: Their mission president has a goatee. But were it not for that authenticity,you'd have no reason to suspect anyone involved had any thoughts about the LDS Church at all. It's nota religion-themed movie; it's a lurid psycho-thriller with a religious aroma.

As far as I know, Missionary is unique for having an explicitly Mormon villain without being "about" religion. We've arrived! Mormons aresuch an established, familiar part of American life that you can have your bad guy be one withoutneeding to explain it. That's progress. The movie may be disrespectful, but casually so, without malice. We're part of the cultural landscape, and fair game if somebody needs a foil.

Speaking of which, if Hollywood is listening, I have diaries for sale.