Mitt, the Mormons & Me 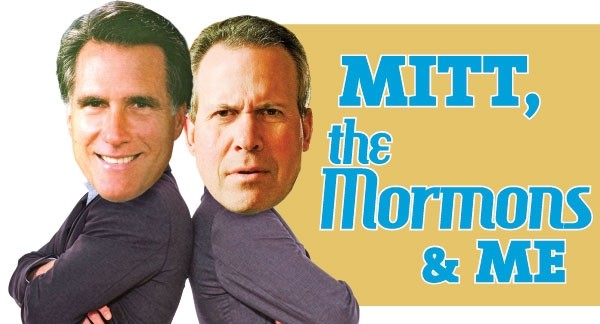 Two events of note happen this month. One is a big deal: Mitt Romney will become the first Mormon presidential nominee of a major American political party. The other is significant only to me: This month marks my 30th anniversary in Utah. But these two August, or august, moments are not totally unrelated. They are forever connected by what happened nearly 14 years ago.

Not that I knew it at the time, but this was how the biggest story of my career started. The letter detailed how more than $10,000 had been paid by the Salt Lake Olympic Committee to cover the college tuition of the daughter of an International Olympic Committee (IOC) member. IOC members, of course, are the ones who decide which cities get to host Olympic Games.

What followed is, by now, a familiar tale. A huge worldwide scandal ensued. Several investigations were launched, eventually revealing how more than $1 million of Salt Lake Olympic money had been directed toward IOC members and their relatives. This money was disbursed through scholarships, presents and cash. Numerous international and local Olympic officials were eventually expelled or resigned. This included Frank Joklik, the head of Salt Lake’s Olympic Committee, who was replaced in February 1999 by Mitt Romney.

But there are some things from this time that I have never shared. They’ve been carefully stored away in a special Olympic “vault” in my brain. After all these years, though, it might be time to crack open the door and let a little air and light into the vault.

Not long after the scandal broke, one of my top sources told me there were concerns at the very highest levels of The Church of Jesus Christ of Latter-day Saints about my Olympic reporting.

According to this source, the question being asked was, “Why couldn’t Vanocur have just kept the letter to himself?”

I’ve never confirmed that any leaders of the LDS Church actually said this. I am not sure I would have been able to. But the tip came from one of my best sources, and I have always believed it to be true.

I also suspected that if a church leader did ask this question, he wasn’t the only one in Utah to do so.

Let’s face it: There were probably a number of Utahns who weren’t happy with my Olympic reporting back then. This included one very angry viewer who sent an e-mail referring to me as a “shit face.”

This is why, for a long time, I haven’t talked about the story or the scandal. Nearly a decade and a half later, I still have some Olympic scar tissue. But with Romney’s nomination coinciding with my Utah anniversary, the timing seemed right to revisit this intersection of his life and mine.

An Evolution
Recently, I put together a special report for ABC4 News. It was about what it might mean to Mormons if Mitt Romney were elected president. Luckily, I knew exactly whom to interview.

KUED’s Ken Verdoia was a key contributor to the PBS documentary The Mormons. He is also an exceedingly clever man. One of Verdoia’s main themes, both in the documentary and in my interview, is how Mormons once were outsiders but now have a place in mainstream American life. Specifically, he speaks to how a member of a once-persecuted church now finds himself on the doorstep of the presidency.

In the interview, Verdoia told me, “It shows just how far not only has the church evolved in terms of its contribution to American society, but also how far this nation has evolved in putting away past prejudices.”

This struck me as a fascinating notion in and of itself. But it also seemed to eloquently sum up my own time in Utah.

After spending a summer during college working at Glacier National Park in Montana, I arrived in Utah in August 1982, very much in love with the West. However, because of my youth and naÃ¯veté, I also brought with me some of the stereotypical misconceptions of Mormons. These included a “gentile” fascination with the notions of polygamy, no caffeine and no premarital sex, and intently wondering who was/wasn’t abiding by LDS precepts. Predictably, in my early Utah struggles, I made every awkward mistake possible in my interactions with the church and its members.

But, after three decades here, I now know quite a bit more about Utah’s predominant religion. I have even learned to speak a little Mormon, though I remain far from fluent. Most importantly, though, I have also come to very much respect and admire the LDS faith and its people.

This is why I was so taken with Verdoia’s comment. When he talked about America evolving and putting away past prejudices, I thought about how I had evolved in my time in Utah. I also reflected on how I had been able to put away my own misunderstandings and misgivings. I, too, had once been an outsider here who finally found a place in mainstream Utah.

But, suddenly, my acceptance in Utah seemed threatened by the Olympic story. When I learned that the LDS Church leadership might be troubled by my breaking of the Olympic story, an odd thought occurred to me: I might not be able to stay in Utah. I remember how, after the story blew up, there was some talk that Salt Lake City might lose the 2002 Winter Games. Just imagine what it would have been like for me trying to live here if the Olympics had been forced to leave.

Well, ultimately, neither the games nor I moved. Still, I reasoned, it might be a good idea to try to reach some sort of post-scandal détente with the LDS Church.

Every few years, when I needed to find my footing with the church, I turned to some sage advice. It was given to me early on in my time here. One of my friends told me I couldn’t really understand Mormons without reading Harold Bloom.

I took this advice. I read Bloom when I was still a very green Utah reporter, and I returned to Bloom after the dust of the Olympic scandal had settled.

Bloom, a Yale professor, wrote a book called The American Religion. It forever changed how I viewed the LDS Church. In this revealing work, Bloom wrote about how the Mormons and their religion represent a “total system of belief and behavior.”

This made me realize I had made a mistake by initially looking at the LDS faith only as a religion. Bloom convinced me I needed to look not just at what Mormons believed spiritually, but also how they lived and behaved outside of church.

For me, this was the most telling thing that Bloom wrote: “… the Mormons, like the Jews before them, are a religion that became a people. That, I have come to understand, always was Joseph Smith’s pragmatic goal, for he had the genius to see that only by becoming a people could the Mormons survive.”

These words gave me an inspired idea.