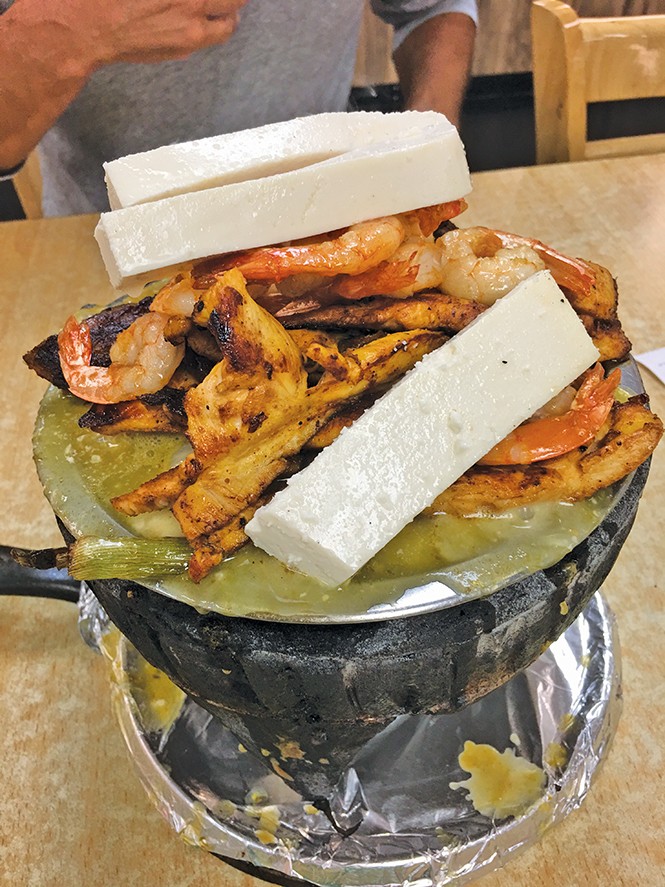 During my undergraduate college days in Colorado, a buddy Jamie introduced me to Mexican food. He took me to a place called La Cafetería, where you could eat all the burritos, tacos, enchiladas, tostadas, sopaipillas and sides that would fit in your stomach for $1.89. The place became our go-to dining spot on Sunday evenings, when the university's cafeterias were closed.

Last month—decades after college—that same friend visited me in Utah. Our palates—including our fondness for Mexican fare—have evolved significantly over the years, and I figured it was time to introduce Jamie to the wonders of molcajetes. For our Mexican immersion, I chose Nuestra Cocina at Rancho Markets on Redwood Road.

The menu is so wide-ranging that there's literally something for everybody, but it takes some time to get your bearings. Kids often opt for something simple like cheese quesadillas ($4.99), which can also be filled with grilled beef, chicken, pork carnitas, al pastor, buche, chicharrón or barbacoa. The same options are available for the café's burritos ($7.99) and gorditas ($4.99).

One of the more popular dishes is mojarra frita ($11.99). This is a seasoned, deep-fried whole fish (tilapia), served with yellow rice, tomatillo sauce and an avocado salad. It reminds me of eating fresh whole fish at beachside cafés in Mexico, and is an excellent option if you don't mind dealing with fish bones.

On Fridays, Saturdays and Sundays, the restaurant serves up two classic Mexican soups/stews: menudo and pozole. The pozole ($7.99) is fantastic, but then again, I've never really tried pozole I didn't like. Shredded roast pork and whole hominy is served in a rich red chile broth with accoutrements like onion, shredded cabbage and radishes, plus fresh tortillas to help soak up all that tangy broth. Menudo (also sometimes known as pancita, which translates as "little gut" or "little stomach" in Spanish) is a soup that is often served in Mexico on weekends, and is said to be a helluva hangover cure. Well, hangover or not, I love it. The key ingredient is beef tripe, which is served, like pozole, in a red chile broth with chopped onions, hominy, lime and fresh cilantro ($10.99).

Looking for an above-average, but affordable, sandwich? Look no further than the tortas here. At $5.99 each, these are warm sandwiches made with flaky bolillo rolls (sort of a south-of-the-border variation on a baguette), smeared inside with black beans and avocado, and served with a choice of beef barbacoa, al pastor, roast pork, buche, chicharrón, chicken or carnitas, all topped with shredded lettuce and salsa. It's a sensational sandwich.

Now, for the big finale. I've written about molcajetes in the past, but here is a refresher. Named for the Mexican stone (often made from lava rock) mortar it's served in, it's is a daunting dish. Nuestra Cocina staff says their molcajete ($25.99) serves two-to-four people. I'd put the estimate closer to five or six. At any rate, it's a quintessentially sharable item. The stone is set on the stove over a hot flame until seemingly molten-lava-hot, then filled with a mélange of ingredients that includes nopales (cactus), grilled chicken and beef, shrimp and mild Mexican green onions (cebollitas), topped with Oaxacan-style fresh cheese (queso fresco). The cheese gets all gooey, runny and delicious when it comes into contact with the hot rock that is used both as a cooking and serving vessel. It's messy. It's filling. It's amazing. Go get one.