More Than a Feeling

Memoria offers the kind of cinematic experience you have to decide to feel, rather than "solve." 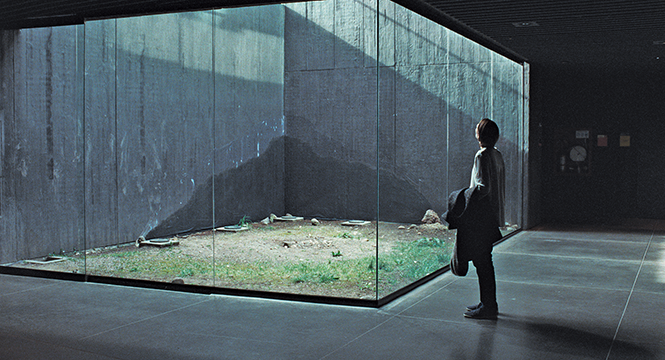 The popular culture teems with conversations about the disconnect between critics and "average viewers"—and if there were a paradigm for the battleground in those conversations, it might be Memoria. Like previous features from Thai filmmaker Apichatpong Weerasethakul (Tropical Malady, Uncle Boonmee Who Can Recall His Past Lives), Memoria can feel like a test to those who get unpleasant flashbacks to high-school English classes where they were expected to interpret modern poetry. Apichatpong might employ narratives, after a fashion, but his movies aren't fundamentally plot-based. What do you do, as a viewer, when a movie resists your determination to figure out what it's about?

I placed Memoria at the top of my list for the best films of 2021—it's only just making its way to Salt Lake City as part of a long "road show" rollout, delayed by COVID—and a second viewing reinforced its magnificence. But my enthusiasm isn't a dare to skeptical viewers to watch something that might leave them confounded, while I have figured it out and can thus assert my intellectual superiority. It's more a recognition that there are different ways for movies to be movies, in the same way that music can move you even if it's not telling a story through lyrics, or for a painting to be evocative even if it's abstract.

Those analogies are apt for more than one reason, since sound is a crucial component to Memoria's unfolding scenes, along with the main character's experience of creative works. The protagonist is Jessica (Tilda Swinton), a British expatriate living in Colombia who is spending time at the home of her sister, Karen (Agnes Brekke), and Karen's husband Juan (Daniel Giménez Cacho) while Karen is hospitalized. It is during that period that Jessica begins hearing a strange noise—a loud thump that she at first believes must be nearby construction, but eventually begins hearing repeatedly in unexpected locations.

For a hot minute—even through the long master shots that do not feel designed to drive the plot forward—it's possible to fool yourself into believing that Memoria will have a somewhat conventional narrative momentum: Is Jessica hearing something real, or imagining it? If it is real, where is it coming from? That notion of the sound as a mystery to be solved is reinforced by a sequence in which Jessica is assisted by a sound engineer named Hernán (Juan Pablo Urrego) in trying to duplicate the mystery sound, steeped in the tension we can feel when Jessica flinches every time one of Hernán's sounds approximates Her Sound. There's even a sense, as Jessica and Hernán begin spending time together outside the sound studio, that a romance is percolating. Mystery, romance ... conventional movie stuff, right?

Then the narrative, such as it is, shifts—and we find ourselves following Jessica into completely new territory, involving another man (also named Hernán) and explorations of memory, death and history. That second act heads in some completely unexpected directions, including a scene that might rank among the more startling things I've seen a movie do in years. There are many possible interpretations as to what these later scenes are about—I've got a few, possibly involving colonialism, linked to earlier scenes where an archeological team is recovering human remains from a construction site—but it feels limiting to talk about Memoria in terms of whether you "get it" or not. Apichatpong's films have often involved myth, mysticism and encounters with the unknown, presented in such a way that it feels like an encouragement to be comfortable coexisting with things that can't be explained simply.

And maybe that's the bottom line of thinking about movies like Memoria that occupy this more abstract artistic space: It's okay to complete an experience without feeling that you've "solved" it. Apichatpong ends the film on a series of land- and skyscapes, meditative moments that feel designed to allow you to emerge gradually from its spell, process the experience and return to the world. There is room for art that simply immerses you in sounds or images that reach for primal parts of your soul; it's not an "emperor has no clothes" trick someone is trying to play on you. Memoria isn't built for a plot synopsis, or an "everything explained" YouTube video. You simply feel it in your bones, like a strange sound that rattles you from complacency and takes you somewhere you never expected to go.