Forms of non-verbal communication combine in A Tonal Caress.

In the video Louder Than Words by Korean filmmaker Yeoseop Yoon, a black man, his eyes wide, gazes upward. His hands, soft, fall at his sides. He stands in a darkened warehouse, illuminated by a single industrial light overhead. The light spreads in a small circle of white, showing the lines of wooden floorboards and steel beams like a box around him.

When he begins to move, it is with a single arm swept upwards and a finger, pointing, as if to say: Now pay attention and think. His hands become a symphony of movement. They flutter, they grasp, they curl, they caress. His face creases. His mouth is taut, corners downturned. His eyes burn. This is Walter Kadiki. He is a poet—a deaf poet. He speaks with his hands, and sometimes—for the benefit of audience members who don't understand sign language—translates his words into written English. Often, he performs his poetry, as he does in the video.

Kadiki lives in Australia, and is a well-known artist there. His first poems came to him around the age of nine, while growing up in England (his country of birth is Zimbabwe). It was in England that he was first encouraged to share his art and where he began performing for the Deaf community. In his new home, where he has resided since 2003, he performs his poetry regularly for both hearing and non-hearing audiences, for film, at festivals and as a special guest for the 2005 Melbourne Deaf Olympics. But Louder Than Words, which launched last year on the website Nowness, brought him international attention.

The video landed on the radar of Salt Lake City artist Gary Vlasic, who in turn shared it with his friends Nathan Webster and Charlotte Boye-Christensen of the SLC-based contemporary dance company Now-ID. An artistic connection sparked immediately, and this week—a little over a year after the video was released—Kadiki makes his debut American appearance in Salt Lake City for A Tonal Caress. Now-ID's latest production combines the talents of Boye-Christensen as a choreographer, Vlasic as a creator of moving art installations and Kadiki as a performance poet.

"His work resonated with me," Boye-Christensen recalls. She has preferred to communicate non-verbally through dance since she was 9 years old. "He managed to express many of the same experiences and feelings I was having in that current moment—of a breakdown in communication and dialogue. There was a power in what Walter was doing. I understood everything even though I didn't understand anything." 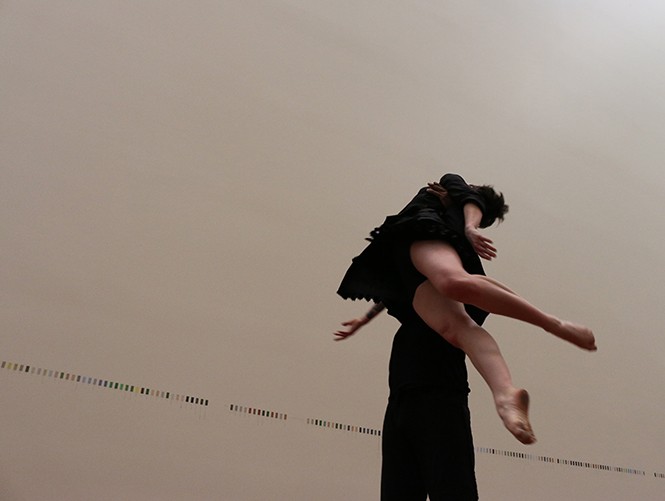 When Boye-Christensen first reached out to Kadiki, he didn't have much faith that the project would become reality. In the wake of Louder Than Words' release, he heard from many people, but with little real follow-through. But when the Now-ID team insisted on a Skype meeting, things started getting serious. With the help of sign language translators, discussions began on how to interweave the three performers' work. Kadiki chose three poems for his contribution, including "Deaf Plague." Created from the perspective of the hearing community looking at the Deaf community, it is a deeply disturbing portrait of fear and judgment:

"It's the perspective of deafness as a bad or negative thing that needs to be fixed or cured," Kadiki signs during a recent video interview. He explains the poem as a translator standing out of sight behind Kadiki's computer speaks his words. "It's a very strong emotional portraying," he continues. "[There is a] tiredness of letting people know it's OK, it does not need to be fixed."

"Sign language is a true language," Kadiki adds. "It has a structure and grammar, just like English. At the performance, there will be an interpreter. They will use the English associated with the poetry. There is a lot of preparation involved to accurately translate my work. They can't just interpret it during the performance. They, the interpreters, need to know that I will use this sign, and I need them to say it with this tonal inflection so that it reflects the intent and emotion."

For Boye-Christensen, not all of Kadiki's words need to be translated. Part of the point of A Tonal Caress, she says, is learning to open ourselves to other forms of listening and comprehending. "Movement," she says, "can connect people in ways that language can't."