SLC barkeeps are champing at the bit for local liquor reform. 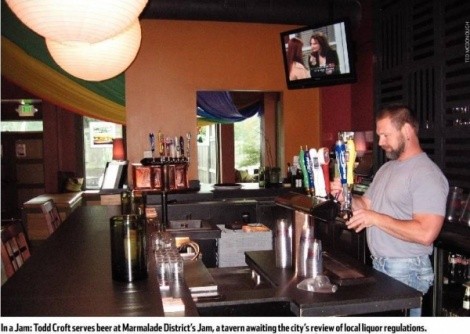 When restaurateur Bob McCarthy decided to open an upscale private club inside an old beer bar on the outskirts of Salt Lake City, he began by asking City Hall for a zoning change. He was told not to bother; the city was already on it. An ongoing update of city liquor code would solve McCarthy’s problem. That was 18 months ago.

Nine months into the remodeling job to create the Jam club in the Marmalade District, McCarthy got a call from the city: The liquor-rule overhaul was taking longer than expected, so he should go ahead and apply to rezone his small corner of the city. In May 2009, the message was reversed: Salt Lake City Mayor Ralph Becker was moving forward with liquor rezoning plans he had talked about during his campaign for mayor.

McCarthy’s sense of regulatory whiplash worsened the last week of June when he got the latest word from City Hall: The Becker administration had determined its plans for liquor liberalization had to be slowed down. A June 25 open house scheduled by the city planning division to begin the process was abruptly cancelled. McCarthy was told his rezoning application would go through as a stand-alone amendment, with the rest of the city to follow later.

Through all this, McCarthy and his partners in Jam have been hanging on by their fingernails, operating a tavern for a “gayborhood” clientele that wants cocktails. McCarthy can’t apply for a state liquor license until city issues are cleared up. By that time, he worries there won’t be any licenses left.

“I’ve invested everything I have into [Jam]—refinancing, credit cards, second mortgages. Our concern is that [city officials] are saying this could take until fall. Meanwhile, the state is saying everybody is applying for licenses [now that “private clubs” are open to the public], and they may run out. We haven’t slept in a long time.”

Del Vance, a restaurateur working to open a bar on Main Street, is currently talking to the city about his desire to have a sidewalk patio with his newly licensed Beerhive Pub.

“The whole justification for having these big, wide sidewalks on Main Street was that they wanted a little bit of Paris,” he says. “If you’re not going to let people sit out on the sidewalks as initially planned, I’d rather have the parking back.” Vance says opening the Beerhive has taken twice as long as it took him to open the Bayou on State Street seven years ago.

With historic liquor reform passing the Legislature this year, Salt Lake City barkeeps and tourism promoters are champing at the bit to make liquor "normalization" a reality in Utah´s capital city. But some city regulations haven´t caught up.

In Salt Lake City, zoning relegates bars mostly to downtown. Development of an entertainment district—lauded for years by city tourism officials and politicians, including Mayor Becker—is hampered by city rules that limit the number of bars to two per large city block. In some cases, city liquor-licensing code is more strict than state law, causing confusion for barkeeps.

City officials counsel patience. David Everitt, Mayor Becker’s chief of staff, says the mayor still wants to revamp Salt Lake City alcohol regulations but wants a deliberative and public process. A rush job could doom the effort, he says. “The last few times the city has tried to change the way we’ve done alcohol, it’s been kind of a bloodbath,” Everitt says. “We recognize this remains a sensitive and complex issue.”

The delay of the city’s formal process for overhauling alcohol rules follows a public-relations debacle that hit City Hall when the mayor announced his desire to put a public-safety building on Library Square. The site selection was criticized as premature and led the mayor’s office to schedule additional public meetings.

Before sending alcohol-code revisions to the City Council, the mayor’s office now wants a larger public discussion, Everitt says. That includes consulting with a city business-advisory board and a city task force that has been reviewing city land-use code for the past year. The mayor also wants to consult with neighborhood community councils.

“There is an understanding that there is a desire for there to be a neighborhood bar in the commercial core of certain neighborhoods, but that may not be true for all neighborhoods,” Everitt says. “We want to go out and take the pulse of the community.”

The goal is to have recommended revisions ready for the City Council by September or October, says Everitt.

The mayor’s office does have a general idea of where it wants to go. First, Becker is interested in lifting most of the restrictions in city code that require set distances between bars and replacing the one-size-fits-all rule with neighborhood-by-neighborhood zoning. The Salt Lake Visitors & Convention Bureau is among groups pressing to eliminate the rule limiting bars to two per downtown city-block face.

Scott Beck, bureau CEO, says conventioneers don’t like to walk, and want hotel, restaurants and nightlife all in one place like they find in other cities. He argues it’s about “normalization,” not liberalization. “We’re not advocating 32-ounce margaritas around your neck walking down the street, like Las Vegas,” he says.

In addition to changed zoning maps, the mayor wants to clean up city liquor-license rules, which, in some cases, are more strict than state law, says Everitt. “There are some real inconsistencies that we want to clean up so [liquor licensees] are not having to wade through the labyrinth of regulations,” he says. “We should not be more restrictive in terms of licensing than the state.”

The City Council has already dealt with the most difficult issue: determining conditions under which bars will be allowed to operate in commercial cores of residential areas. In May, the council allowed a tavern, Andy’s Place at 479 E. 300 South, to upgrade to private-club status and serve cocktails. Jam had hoped to be included in that zoning change but was told to wait. Now, its owners hope they can hold on.

“The city wants us—that’s what they say—so we feel confident,” says McCarthy, Jam owner. But the rollercoaster ride is making him feel sick.

“You take a small business, put a recession on it, and then take a city that has a difficulty with quick decision-making processes, and we’re in a living nightmare.”