A drug-fueled journey through LDS film 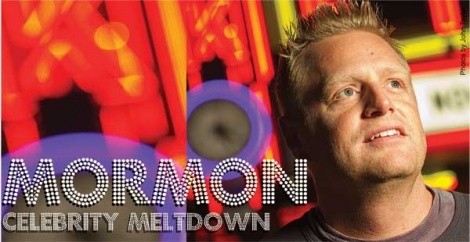 On June 1, 2007, at 8 a.m., Michael Birkeland blearily opened his eyes to a clear blue sky. He was lying naked in a field in Orem, his clothes scattered around him, his car a few yards away, the engine still running.

Birkeland had been at a party until 4 a.m., riding high on cocaine. He had no idea what had transpired in the missing four hours. As he picked up his clothes, he realized it was his young son’s birthday.

Such a descent into a narcotics-drenched oblivion has its roots in events five years before, when the stand-up comedian and actor was at the center of a nascent LDS-comedy-film boom, playing in a supporting role an earnest “Peter Priesthood” church member in the first Mormon comedy, The Singles Ward.

The low-budget independent film, aimed at Mormons and made by Mormons, launched the careers of actors Kirby Heyborne, Will Swenson and Birkeland, among others. It told the story of a divorced, lapsed Mormon who found success as a stand-up comedian, only to be drawn back to ward life by his attraction to a singles ward’s activity director. While Heyborne and Swenson parlayed that initial success into mainstream careers, Birkeland’s fame was limited to Utah and international Mormon communities through a series of roles in LDS-comedy movies made in the mid-2000s.

Born to devout Mormon parents in Tennessee, his rise and subsequent decline has all the ingredients of a Utah County spin on a typical Hollywood tale. “I let the social side [of success] take over, I let it ruin my life,” says the 40-year-old. His tale also echoes the boom and bust of the LDS comedy films that made him a local star. He argues those involved in the films’ production were “cursed a little bit,” even offended God. “There was too much pride. It got to all our heads.”

Friend Brandi Daniels has known Birkeland for years. She feels Birkeland wants the best of both worlds. “He wanted the quintessential Mormon family life, the wife, the children. But he also wanted the fame and the fortune that comes along with it. I don’t think you can do both very successfully.” Indeed, being Mormon in the entertainment business comes with its unique stresses. Mormons, she says, “want somebody to stick to their values and standards. If I see an LDS actor, I want him to have LDS morals; I don’t want to hear he’s been drinking and partying.” 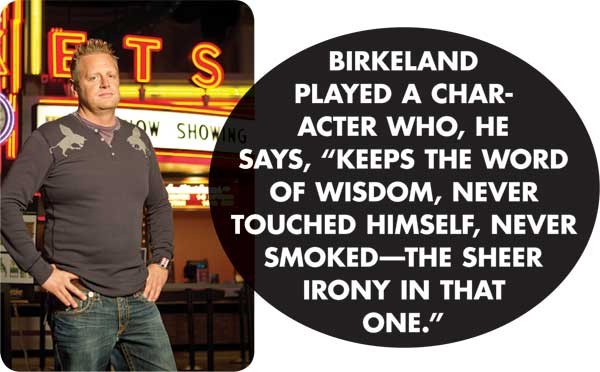 In a world that’s full of people named Michael, Birkeland says, “There’s only one Michael B, baby,” jerking his upright thumbs at himself. Michael B is the nickname given to him by a friend introducing his stand-up act. His friends call him that or simply “B.” But trying to tell “B’s” story isn’t easy. For a man constantly texting, he can cease communicating for days on end at the drop of a hat, then resurface as if nothing’s happened, leaving some frustrated friends to ponder what they see as a lack of stability. Even the idea of a story on Birkeland makes some of his friends scratch their heads. “You just never know quite what to believe, but it’s always entertaining,” says stand-up comic Dave Nibley, with a laugh.

Birkeland has so many wild, tough-to-verify stories that sorting out truth from drama, whether his or others, isn’t easy. “I’m a comedian,” Birkeland says. “Of course I embellish.”

So, ladies and gentlemen, this is Michael B’s story: truth, legend and everything in between.

Birkeland’s saga threads through small roles in The Singles Ward, a film that eerily sketches out some of Birkeland’s later life, and The R.M., to a starring role in the LDS comedy Home Teachers, followed by a two-year stint managing a Provo comedy club. But behind the scenes, his appetite for drugs, drinking and partying led not only to his divorce but, finally, in an Orem field, to a confrontation with what he calls his “carnal appetites.”

“I took all that God gave me and threw it out the window like a freaking bitch,” he says. “I became this proud person full of shit, all this knowledge I was doing nothing with.”

After his cocaine-driven wake-up call, rather than a 12-step program or counseling, Birkeland says he locked himself away in a hotel room for 10 days and quit cold turkey. “I was bleeding out of every hole in my body,” he says.

Such drug usage stands in sharp contrast to his love of studying the Book of Mormon, earning him a reputation among his friends as a “scriptorian.” He says he became a man obsessed only with learning about faith, not following. That passion for Mormon doctrine did not prevent his 2003 excommunication from the LDS Church. “I willingly broke the commandments. I did it so many times I didn’t have any feelings.”

But three months after his 2007 drug-binge black-out, Birkeland hiked up the side of Mount Timpanogos. He had lost “everything spiritual in my life.” He stood on the edge of a cliff, by a small fir, the white waters of a raging river several hundred feet below. “I wasn’t trying to kill myself. I am the least suicidal person you’ll ever meet.” Rather, he says, he wanted answers. He needed to know he mattered, that there was something more to him than just being Michael B.

“That’s me on that freaking mountain, by myself. Do I matter?” he asked God. Then he closed his eyes, lifted his arms from his sides and leaned forward into the thin air.

Freeze frame that moment of the then 36-year-old blond, spiky-haired man, frozen on the lip of doom, and you see someone caught between mammoth contradictions. A man who yearned for fame, yet loathed the emotional isolation it brought him. A man who daily broke the rules of his faith, yet misses nothing with more passion, besides his children, than the divine guidance his church took away from him with his excommunication.

Birkeland was “angry at the whole world. I knew one day I’d start repenting. I would feel guilt and sorrow. I put it off and put it off until it destroyed my life and marriage. And then I woke up naked in a field and never looked back.”

CHOKING FOR JESUS
Birkeland’s parents are devout members of the LDS Church and have gone on five missions. “It’s their life,” he says. They raised him, their four other boys and a daughter in Chattanooga, Tenn., hostile territory for Mormons, Birkeland recalls.

Davy Kammer grew up with him. “He was frigging funny, dude, unbelievably hilarious, always the center of attention.” Another friend, Tim Treadway, recalls laughing so hard in church at his jokes he’d have to leave. “Now, he has a lot of complications in his life, so he doesn’t make me laugh so hard.”

Birkeland says when vandals broke into the single-wide trailer that housed the LDS seminary, they smeared feces over the walls and scriptures. He and his brothers tracked down the culprits. Birkeland cornered one in the gym. “I put him in a chokehold and told him the importance of leaving members of The Church of Jesus Christ of Latter-day Saints alone.” 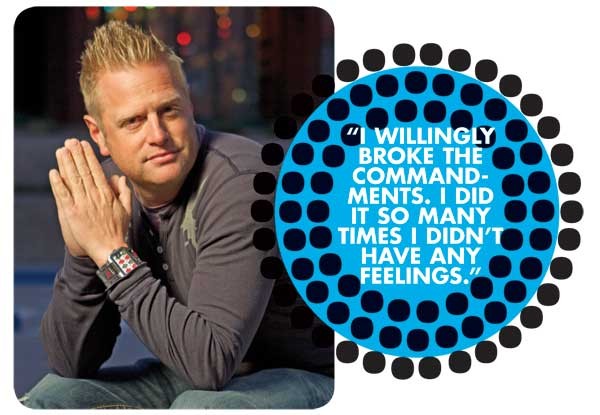 Beyond the schoolyard slapstick and the struggles of being Mormon in a Baptist-dominated state, what Birkeland shared with very few was that he was systematically abused from ages 7 to 14 by two middle-age women music teachers his parents sent him to for lessons. As an adult, he took anger-management classes, he adds, after violently confronting the abusers at their Chattanooga home.

But to his friends, he was the life of the party. They expected him to be a star. “We thought he’d be on Saturday Night Live or making movies in California,” Kammer says.