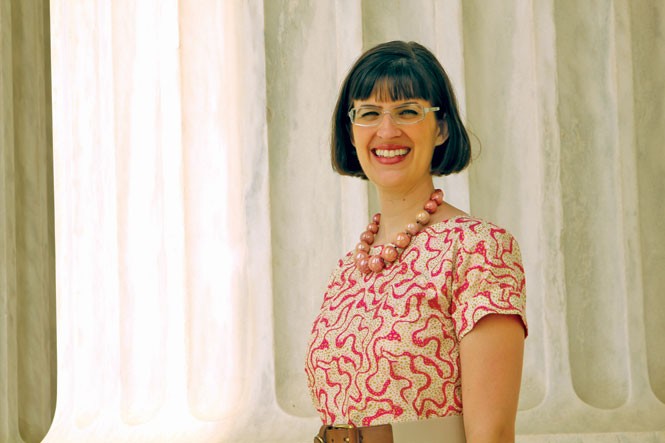 "Is Kate Kelly a hero or villain?"

That question was thrown out by a presenter discussing The Church of Jesus Christ of Latter-day Saints' approach to transparency when it comes to its finances during one of the final panels at the 2014 Sunstone Symposium.

The answer, the presenter quipped, "depends on whether people from the Church Office Building are here."

Kelly, who was excommunicated from the LDS Church in June after leading the group Ordain Women in its ongoing struggle for gender equality in the Mormon faith, was a hero to many at the symposium, this year titled Bridges & Byways: Traversing the Mormon Landscape. She and other leaders in the Mormon feminist movement, including Margaret Toscano, received a standing ovation in a packed auditorium as part of a panel addressing how to tackle stereotypes of "nice women" when taking on sexism in the Mormon church.

Another panel member, Janice Allred, received thundering applause when she characterized the obstacle to women gaining the priesthood as the men "standing at the gates of the temple with their priesthood keys dangling between their legs."

That unapologetic tone was also apparent in a panel of board members of Ordain Women who addressed the question of where the group was going. One speaker highlighted how in the run-up to, and fall-out after, Kelly's excommunication, weekly church attendance by female and male Mormon feminists, according to an Ordain Women Facebook survey, had dropped 12 percent and 15 percent, respectively. While one panelist said that her emotional response to Kelly's excommunication was akin to "an abused wife who won't leave her man," another noted that in the wake of Kelly's excommunication, the consequences of "breaking the cultural script" that "the experience of being women in religion is being silent" was hate mail and being ostracized and rejected at their local wards.

The panel argued that the LDS Church had severely underestimated the impact of the Internet—Ordain Women is run "95 percent online," Kelly said. "We're not going anywhere," said the final panelist, to rousing applause, in response to the question of the future of Ordain Women.

One panel addressed a federal judge's December 2013 ruling effectively striking down the legal prohibition against "religious cohabitation" that was overshadowed by a federal ruling by Judge Robert Shelby that briefly opened the door to gay marriage in Utah.

The ruling by federal judge Clark Waddoups, noted panelist and Nevada anthropology professor Jennifer Huss Basquiat, did not legalize polygamy, nor did it decriminalize underage marriage. "All it did was strike down the religious cohabitation section of [Utah's] bigamy laws," she said.

Basquiat argued that "a lot of distress comes from the fact that [polygamists] can't share [their] joy," of being in plural marriage because of their fear of prosecution. Polygamists, she argued, "simply want not to be felons."

Vicki Darger is "spiritually" married to Joe Darger and has two sister wives. She cares for the nine children she had by him at their suburban Utah residence. She was raised in polygamy with 39 siblings. "We had a celebration the night we heard" about Waddoups' ruling, she said.

Her extended family was "overcome," she said, but after the cheering, they realized the ruling could still be appealed, and "they lay low. There's still a mistrust of society."

Centennial Park polygamist Stan Shepp said the ruling "was a step in the right direction." He works in St. George, he said, and if someone learns he is polygamist, he can face discrimination. "It's OK for [local residents] to persecute us, mock us, deny me work. That's a problem I think needs to be overcome."

Polly, who did not give her last name, is also from Centennial Park. She highlighted the familial warmth of polygamy. She could share for the first time, she said, "what it's like to be us" because the threat of prosecution had been lifted by the ruling.

Moderater Nadine Hansen, an attorney who has represented members of the Fundamentalist Church of Jesus Christ of Latter Day Saints, headquartered on the Utah-Arizona border, offered an alternative perspective. She highlighted a 2011 British Columbia Supreme Court ruling that found polygamy could cause harm to men, women and particularly children. She highlighted the "dysfunction" of the FLDS under former prophet and convicted pedophile Warren Jeffs.

Polly responded that the problems with the FLDS community, which resides across from Centennial Park in Hildale, Utah, "had nothing to do with plural marriage." She contrasted any attempts to stop polygamy as akin to the Holocaust. "That's what it's going to take. You're going to have to kill us," she said, to stop her and her group worshipping as they see fit.

Similar passions emerged during a debate on gun rights and whether Mormon youth should carry firearms. Sunstone regular Robert Rees, who teaches at the University of California, Berkeley, expressed the fear that "an alien force had occupied his fellow Mormons ... who regarded the rhetoric of the gun lobby as sacred scripture." He cited Mormon extremist bloggers who drew on quotes from the Book of Alma in the Book of Mormon—"Ye shall defend your families even unto bloodshed"—and Brigham Young, as if any potential threat to their gun ownership placed them in mortal peril.

"Mormon culture must understand [it needs] a sea change in its attitude to guns and violence," Rees warned.

Utah gun-rights attorney Mitch Vilos countered with video news clips of teenagers who used firearms to protect themselves from home invaders. "Would the Lord want a different outcome than that?" he asked.

Most murders are committed in states with strict gun laws, he said. "Utah is a nice place to live, and we are awash with guns."

Mormon youth, separate from the issue of guns, were also the topic of a session called What the Church Can Offer Youth, hosted by five young women who all contribute to the Young Mormon Feminists blog.

Julia Jarrett, a lawyer and mother, addressed the church's "slick advertising campaigns" and its attempt to reach the youth through out-of-touch Twitter campaigns by senior church figures.

"We're not looking for line-in-the-sand constructs," she said. "The youth in this church wants to feel Jesus in our services."

Panelist Tinesha Zandamela addressed privileges that white LDS youth enjoy that youth of color do not. The daughter of a biracial couple, she talked about how, as a person of color, "I knew that if I did anything bad everybody [in the ward] would know about it." Her African father got into trouble at church for wearing colored shirts, she said, while no one commented when white-male church members did the same. She was summoned by the bishop for "dressing like a prostitute" because she wore sequined high heels to church. At a church activity for 12-year-old girls involving makeup and French braids, "they had this makeup laid out of 50 shades of beige."

She also spoke of being encouraged to date the only "two black boys in my stake," and how she was stared at during a dance at BYU. White Mormons assume she is a convert when they see her with her white mother and sister, she said. All of this contributes to the feeling that "your testimony is never good enough," she said, adding that white people need to acknowledge that they enjoy privileges that leave her feeling like an outsider in her own faith.

The final speaker at the panel, Mormon feminist Marina Tijerino-Abe, said that hearing about Ordain Women and Kelly was like finding, for "the first time in my life," she said, "a role model in the church."

Kelly's excommunication left the Japanese-Venezualan feeling "so hurt and so shocked," she said. "What are people like me supposed to take from that?"

That none of the LDS Church's leadership "stood up for her seriously sucks," and made her "think I'm perfectly justified in losing some of my faith in my leadership."