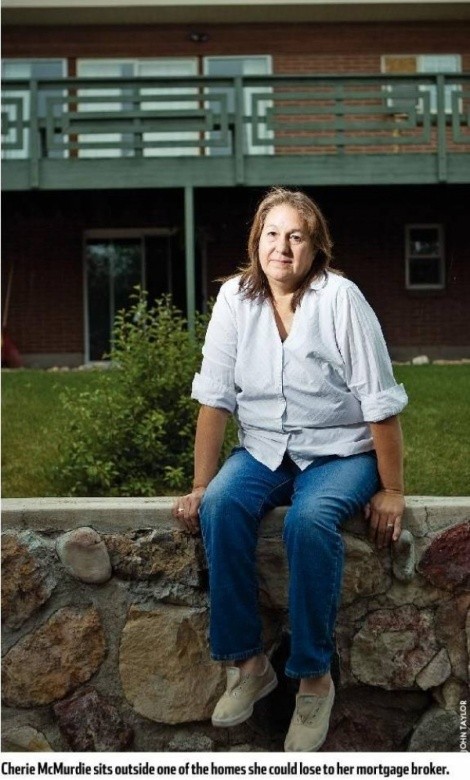 In October 2008, as the world’s financial markets were sucked into a giant vacuum created by the sub-prime mortgage crisis, Cherie McMurdie endeavored to buy her backyard neighbor’s house.

McMurdie’s adult children and grandchildren—some of whom already lived with her—had ample income to collectively afford the mortgage payments. Images of a McMurdie-family campus, where everyone would be close, was an enticing dream. In short, she went shopping for a loan at the most difficult time in recent history to get a mortgage, but she said she trusted a Lindon mortgage broker that said he could make her dream a reality.

“We just wanted to live here forever with our families,” McMurdie says.

She has a job as a school aide, but neither she nor her fiancé had sufficient credit history. The only home she ever owned is the one she grew up in and inherited from her parents. McMurdie never even had a credit card. Her children each had credit problems of their own, but did have incomes.

The loan she signed got the family their second home, but within one year, the $245,000 loan has balooned to a $300,000 debt that now threatens the home she purchased and the one she inherited.

“It’s a situation that could take both of our houses from us and leave 16 people out on the curb with nowhere to go,” Cherie’s son Kelly McMurdie says.

McMurdie says she signed documents she didn’t understand, but she didn’t worry about that because she trusted her mortgage broker, Darren Eady, of Good Neighbor Mortgage, whose motto is “If I cannot find a loan that is right for you, it most likely does not exist.”

What she got was a hard-money loan at 3 percent monthly interest over a one-year term. So-called hard-money loans typically carry high interest rates, are backed by real estate collateral, and are issued by private individuals and businesses with private, nonbank money.

"The vast majority of these deals end in default,” says nonprofit mortgage counselor Jeff Fullmer of Your Community Connection in Ogden. Hard money loans are low-risk for lenders because in the event of a default, the lender can take the collateral, but the terms are so oppressive to borrowers that only the most desperate situations justify using one, Fullmer says. In this case, the private money involved was his, Eady says.

McMurdie says she had no idea that the home she was buying and the home she inherited were filed as collateral on the loan. She paid $30,000 as a down payment—all the money she had—and made regular payments of $1,900 per month as per the contract. She says now she hadn’t understood and wasn’t told that the interest was accruing at three times that amount.

“He set me up to fail and him to gain,” Cherie McMurdie says. “I was not explained in terms I could understand what I was signing.”

Eady denies Cherie McMurdie’s claim that she was unaware of the contract details, referring to her family as “predatory borrowers” who are now feigning naivety. He explained the contract to Cherie McMurdie multiple times at the signing and has made repeated follow-up calls about the accumulating interest.

“This money lent to Mrs. McMurdie has taken me my entire career to save,” he said. “This is not money from an inheritance or gift funds or other investors’ money. The only person that has a loss at this point is me, until my money, plus interest, is returned.”

Michael Blackburn of Perfect Home Living, a mortgage fraud investigation nonprofit in Salt Lake City, has investigated the case and is skeptical of Eady’s explanations. Mortgages require certain disclosures from lender to borrower, such as a good-faith estimate of how much a loan will cost in total and a disclosure of the annual percentage rate on a loan application. The title company that handled the deal between Cherie McMurdie and Eady has none of those documents, Blackburn says.

“If Ms. McMurdie was lying [about not understanding the loan terms], the loan application would show that and it would show the interest rate she was seeking,” Blackburn says. “But it’s not here.”

In its place is a document signed by Cherie McMurdie entitled “Note,” which does say “I will be charged points of 3 percent on the 15th of each month.”

The Utah Division of Real Estate is also looking into the case. The division does not comment on ongoing investigations and declined to comment for this story, says Department of Commerce spokeswoman Jennifer Bolton.

The timing of the deal is important. On Oct. 15, the very day the hard-money loan was signed, the U.S. Federal Reserve pumped $250 billion into the U.S. banking system fearing that it would collapse as the housing bubble burst. Home builders had been complaining throughout the year that credit-worthy customers couldn’t get loans. So what made Eady confident he could get Cherie McMurdie a conventional loan shortly after the explosion of the financial crisis?

“You’re asking the wrong person. I’m not the borrower, I’m the lender,” he says. “Ask them about their exit strategies.”

There’s a bitter irony to the story: The plan worked, partially. McMurdie applied for the credit cards like Eady instructed and now has a 723 credit score, which is good. Recently she was approved for $245,000 loan from U.S. Bank, but that’s not enough to pay Eady the roughly $300,000 she now owes him.

She says that Eady has given her an Oct. 22 deadline to pay him what she owes or he’s threatened to take both her homes. Eady told City Weekly he’d like to “work things out” but didn’t say specifically how he might do that.