Ideas for the Mormon Tabernacle Choir 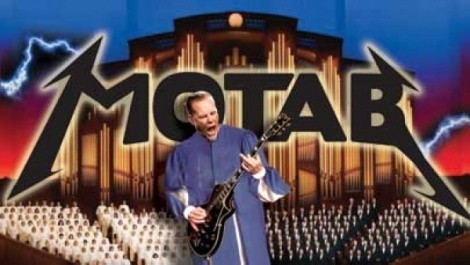 “So, this isn’t just about Christmas?” So began the death knell of my pitch meeting with the Mormon Tabernacle Choir—or MoTab, the boy-band-y nickname they’ve acquired over 165 years of music and the spoken word. It’s a bummer. I was gonna make ’em famous. And rrrrrich, bitch.

OK, so MoTab is already pretty renowned, what with having performed for every president since Taft and in almost 30 countries. They’re also a self-funded, all-volunteer choir motivated only by a love of God and music. Maybe they don’t trifle with such superficial ratings and filthy lucre—except on Facebook, where they ask you to “like” them in order to win a pair of tickets to their annual Christmas concert. So they’re getting into the promotional spirit. Why not explore new revenue streams?

MoTab’s music director, Mack Wilberg, seemed like the guy to hit up since most of these ideas play into his wheelhouse. It’s a busy time of the year, though, and MoTab wasn’t sure Mack would have time to chat, as he only comes in once a week and is usually busy writing music for the choir. But they’d ask.

While I waited, I got my sh—stuff together. But soon it appeared I wouldn’t hear back. No surprise there. The nice lady I spoke to on the MoTab Hotline sounded a little taken aback when I pitched a “fun” interview and told her one of my ideas. “Oh, OK …” she’d said, right before asking about the Christmas concert. I should’ve told her we’d plug the show somehow.

Maybe they thought City Weekly—the big, bad, heathen alt-weekly—was just gonna make fun of ’em. That’s understandable. Why would we devote space to them that could go to a perfectly good indie-rock flavor of the month? If you answered “snark,” well, we’re busted. Most of these proposals would get blown away with one hot blast from Moroni’s trumpet. But one of ’em is viable and meant in all seriousness as a means to generate operating expenses for a group that tours its tuchis off for Somebody Else’s glory. You’re gonna have to guess which one it is, though.

Carlos Santana
Santana knows something about being given a leg up. He was destined to forever play “Black Magic Woman” at state fairs until music mogul Clive Davis gave him the idea to pair up with a buncha young’uns and coast on their fame. It’s time to pay it forward, Carlito. How about spicing up some MoTab standards with slinky rhythms and snaky licks? Who knows? Next Christmas concert, you and Rob Thomas might be able to make a surprise appearance on “Smoove.” Now that would truly be Supernatural.

Electric Light Tabernacle
MoTab doesn’t need a stage show … but does Muse really need fake towers and computer animation? Did Judas Priest need those crappy-awesome screen-saver backdrops? It’s about presentation, baby. And while 30 dozen singers separated by gender beneath a single organ and a backdrop of towering columns is impressive, it ain’t no giant zombie mummy like Iron Maiden’s animatronic mascot, Eddie. Nor does it compare to synchronized explosions, fog and multicolored lasers. Just puttin’ it out there.

MoTaballica
Finnish cello quartet Apocalyptica started out doing Metallica covers. Beatallica mashes up Beatles and Metallica tunes. Metallica teamed up with Lou Reed in 2011. Those trash-metal strumpets will hook up with anybody, so MoTab oughta get some, too. Personally, I’ve always thought the stompin’ Sunday School chestnut “Book of Mormon Stories” or the sacrament-meeting standard “Come, Come Ye Saints” were just beggin’ for the metal treatment. And frankly, MoTab’s powerful collective voice would sound a whole lot better over power chords and click-track drums than Reed’s somnambulant talk-singing does.

The MoTab Tribute to [Insert Artist]
Hayseed Dixie did a bluegrass tribute to AC/DC and other classic rockers. The Rockabye Baby! label churns out instrumental lullaby tributes to Tool, Bob Marley and The Flaming Lips. The Vitamin String Quartet has more than 200 CDs of their classical arrangements of popular music from the likes of Lady Gaga, Coldplay and Radiohead. And they all move a whole lotta units. Why shouldn’t MoTab get in on this action? Imagine 360 clarion voices doin’ the Lips’ “She Don’t Use Jelly.” She uses va-a-aaaas-eline … . It’s a no-brainer. And remember: Pat Boone revived his career singing big-band covers of heavy-metal tunes.

Epilogue: The night before deadline, MoTab’s rep called to apologize that Mack Wilberg wouldn’t be able to grant an interview. He was going to call directly, but his workload prevented it. That was pretty fetchin’ nice of ’em. Thanks for trying.