Tully captures the anxieties of leaving youthful irresponsibility behind. 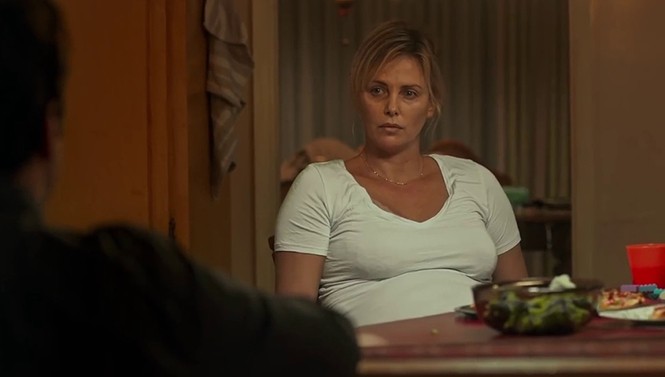 It makes a certain obvious sense that Diablo Cody has become American cinema's foremost chronicler of women who can't quite come to terms with being grown-ups. After all, she started her career with a splash as the screenwriter of Juno, which leaned heavy on hip quips in its tale of a high-school girl's unplanned pregnancy, then moved on to teen horror with Jennifer's Body. But rather than wallowing in arrested adolescence, Cody has graduated in most of her subsequent projects to looking with a hard eye at the inability to confront no longer having every option open to you—like the writer trying to re-capture a high-school romance in Young Adult, or the musician who left her family behind to be a rock-and-roller in Ricki and the Flash.

In Tully—reuniting Cody with her Young Adult director (Jason Reitman) and star (Charlize Theron)—she creates yet another protagonist wrestling with the realization that she's not the girl she used to be. Theron plays Marlo, a suburban New York mother of two with a third one on the way and a fragile grasp on managing all of her maternal responsibilities. Her wealthy brother (Mark Duplass) gives a unique baby gift by offering to pay for a night nanny to help her out, but Marlo resists—until a string of rough nights with the newborn leads her to make the call. And soon thereafter arrives Tully (Mackenzie Davis), an energetic young woman who tends to the infant in the middle of the night, and becomes a friend and confidant to Marlo.

There's a variation on this premise that becomes exactly the kind of Hand That Rocks The Cradle-esque psychological thriller Marlo first fears when she considers bringing on a nanny—a story about a woman's insecurities manifesting themselves in horrifying ways. Cody and Reitman slide in a different direction, though insecurities are still a huge part of the equation. They set the stage brilliantly in a montage in which Marlo's life after the birth of baby Mia becomes a numbing repetition of middle-of-the-night diaper changes, breast pumping, midday naps grabbed whenever possible, and somehow in all of that taking care of the other two children—including a non-neurotypical 5-year-old whose behavior at times pushes her to the edge—while her husband Drew (Ron Livingston) deals with work responsibilities after a recent promotion, but also kind of hides away at night to play video games. Marlo can barely keep her head above water, and all she can think about are the ways she's failing.

Those emotions are tied up in the history Cody gives to Marlo, and the way Theron portrays Marlo's struggles with that history. Tully reveals Marlo having grown up in a dysfunctional family, and addresses her young adulthood as a bisexual living a vital life in a pre-gentrified Brooklyn neighborhood, including a long-time relationship with a woman. There's a terrific snippet of dialogue as Marlo describes to Tully the stability she found in her marriage to Drew—"I rode every horse on the merry-go-round ... Drew was the bench"—and Tully plays out as a tug-of-war between the grounded, predictable family life Marlo didn't have for herself but wants for her children, and facing down having become the person whose daughter sees her postpartum belly and asks with concern, "Mom, what's wrong with your body?"

Those who still associate Cody primarily with Juno might be surprised that there's little overt jokiness to Tully, though there are bracing, caustically funny bits like Marlo melting down in a meeting with the school principal over concerns about her son's "quirky" behavior, and maybe an easy shot at Marlo's nouveau-riche sister-in-law serving the kids truffle mac & cheese. The character study remains the focal point, along with the relationship between Marlo and Tully, leading up to surprisingly emotional moments of self-awareness. Some of the gimmicky plot machinations might feel unnecessary, but they prove to be an effective way of giving shape to Marlo second-guessing her life choices. After more than a decade of writing movies, Cody has mastered the art of showing us that avoiding being a grown-up ain't all it's cracked up to be.