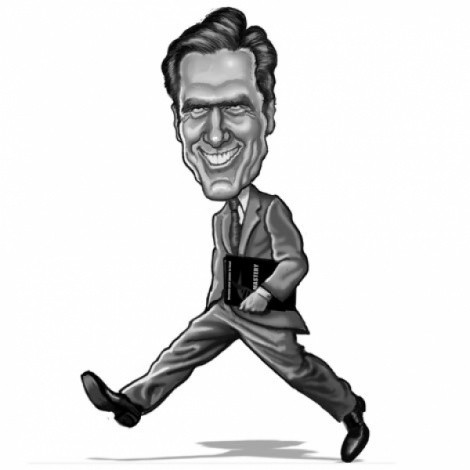 My heart sank when I saw that my old missionary companion, Mit Romney, with whom I served in the Paris, France mission for two years—the best two years of my life—was slated to appear in the upcoming mega-motivation seminar. All the greats in the world of motivation would be participating—Zig Ziglar, Apolo Ohno, Rudy Giuliani, Kyle Whittingham, Sarah Palin, et al.

My heart sank because I know, from painful firsthand experience, that Mit (some time ago he jettisoned the superfluous second “t” from his name to show how serious he was about downsizing his life) from time to time has a problem getting himself motivated.

I knew that it wouldn’t be long before Mit would ring me up in a panic about his upcoming gig. He would be in a lather about motivating himself to get up there and tell people how to get motivated. As I awaited his call, I cast my memory back to the days of our youth when we served as emissaries of the Lord Jesus Christ, doing our damnedest to bring the Gospel to the stiff-necked denizens of France.

Initially, we hit the ground running, imbued as we were with the Spirit of the Lord. We pounded the pavement, knocked on innumerable doors and stood on milk crates in the Jardin des Tuileries to bear our testimonies as to the truth of the Restored Gospel. After washing our sweat-stained, standard-issue socks and undergarments in the sink and hanging them out the window to dry, we would kneel in prayer and then fall exhausted into bed. The next thing I knew, Elder Romney would be shaking my shoulder and singing the BYU fight song, “Rise and Shout.”

We would stumble down the stairs and once again head out into the mean streets of Paris, Mit always in the lead, his powerful stride motivated by his zeal to spread the Gospel to the French nation, kindred and tongue.

Our motivation continued at full throttle, especially after we converted Ursula and Gudrun, German sisters who were working as au pairs for a wealthy French family. But then we hit a dry spell, and soon Elder Romney fell into a slough of despond. He wanted to knock off proselytizing after lunch, and often he didn’t even finish eating his baguette. All he wanted to do was linger in the outdoor café on the banks of the Seine, drinking endless cups of coffee and smoking Gauloises, about the foulest smelling smokes this side of Marrakesh.

After a while, I couldn’t even get him to leave our little flat on the Rue des Grand Escargots in the 16th Arrondissement. Not even the prospect of a weekend with Ursula and Gudrun at our favorite spa near Salzburg could motivate him to get moving. All he wanted to do was lie on the sofa and watch TV. He became obsessed with French game shows, his favorite by far being Quel Est ce Fromage? Blindfolded contestants would be presented with a platter of various cheeses, and they had to guess whether it was a Camembert, Roquefort, Boursin, Munster, Neufchatel, Brie de Meaux, or a nicely aged Delice de Bourgogne. Some of them would actually stick their French noses right into the cheese, which would send Mit into fits of laughter. It was the only thing, however fleeting, that could dissipate the dark mists of gloom that did seem to envelop him.

I’m certain that Mit would, to this day, be lying on the sofa watching Quel Est ce Fromage? had I not, by the purest serendipity, discovered in a small bookstore on the Rue des Petite Canards a small volume by the notable pharmacist Émile Coué. A proponent of auto-suggestion, Coué propounded the notion that the cure to all ills was the affirmation, “Tous les jours tous points de vue je vais de mieux en mieux,” or “Every day in every way I am getting better and better.”

As soon as Elder Romney started practicing the Coué Method, he was back on the streets, raking in converts right and left. But through the years, there have been lapses and loss of motivation, and my humble job has been to remind Mit of the Coué Method.

Late last night, the call came in from an unmotivated Mit. “Monsieur Roquefort,” I said, using my affectionate nickname for him, “remember, tous les jours tous”—I didn’t get a chance to finish, but I didn’t need to. My old missionary companion had gotten his motivation back.