Bob Odenkirk expands his repertoire to action hero in Nobody. 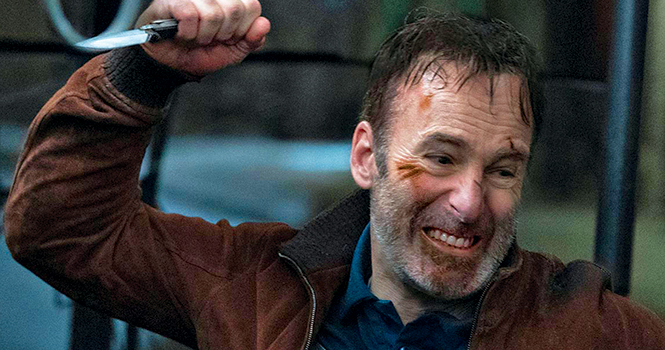 Consider, if you will, the curious career path of one Robert John Odenkirk—Bob, to his friends and fans. For a decade from the mid-'80s to the mid-'90s, Odenkirk was able to build a successful career as a comedy writer, winning Emmys for Saturday Night Live and The Ben Stiller Show, until he got a hankering for doing more on-screen work. For another decade, he was a reliable comedy performer, starring with David Cross in his own Mr. Show with Bob and Dave and doing guest spots on multiple sit-coms. Then he took another 45-degree turn, shifting to drama for the role of low-rent attorney Saul Goodman on Breaking Bad and continuing with Better Call Saul. So it only stands to reason that, at the age of 58, Bob Odenkirk might think, "Hey, why not become an action hero?"

In many ways, there's a familiarity to Nobody in both concept and execution; as written by John Wick creator Derek Kolstad, it could easily be tweaked to become another entry in that franchise. Yet there's also something distinctive that Odenkirk brings to it, simply by virtue of his versatility and the previous stops on his career journey. Here's a movie with a protagonist who needs to be believable both as a wimp and as a badass, and Odenkirk nails them both.

The wimp part is clear from an effective early montage that distills the life of Hutch Mansell (Odenkirk) to a few repetitive moments in every single work day: leaving his wife (Connie Nielsen) and two kids to head to the bus stop; arriving at the machine shop owned by his father-in-law (Michael Ironside) where he works as an accountant; drinking some coffee; heading home. But there's a disruption in that routine when two burglars break into the Mansell house one night, leaving the family shaken and everyone questioning Hutch's masculinity.

What they don't realize is that Hutch has ... let's just leave it at "a past." Therein lies the badass part, which erupts when a bunch of drunks get on the same bus with Hutch, start to hassle other passengers, and Hutch proceeds to dispatch them all with extreme prejudice. It's actually a fairly nifty fight sequence constructed by director Ilya Naishuller and fight coordinators Kirk A. Jenkins and Daniel Bernhardt, one that refuses to turn Hutch into a superhero and suggests a guy shaking off quite a bit of rust. The narrative plays coy for quite a while with the exact nature of Hutch's pre-domesticity life, but it doesn't take much puzzle-solving to figure out that he's one of those people—like John Wick himself, or Kill Bill's Beatrix Kiddo—who abruptly found that you can leave a certain kind of life, but that doesn't mean it will leave you.

Most of the story revolves around the fallout from that bus battle, as one of Hutch's victims turns out to be the kid brother of Russian gangster Yulian Kuznetsov (Alexey Serebryakov). The subsequent warfare between the two provides the motivation for the action beats, and nobody's kidding anybody that Nobody—again, like the John Wick films—exists primarily as a vehicle for those beats. Most of them are creatively staged and full of the kind of ridiculousness and improvisational weaponry that inspires a guilty giggle right before the kill shot. While Naishuller proves inordinately fond of ironically underscoring his big sequences with bombastic standards like—"The Impossible Dream" and "You'll Never Walk Alone"—he rarely makes a choice that gets in the way of the crunching entertainment.

And he's got Odenkirk, who unexpectedly feels like he was born for a movie like this. Every sadsack indignity he endures at the outset seems completely in keeping with the actor playing him, but that's just as much the case when he gets that look in his eyes that is action-hero code for "aw shit, somebody's in trouble now." There are comedic moments here as well, naturally—not all of which are smoothly executed—and Odenkirk hasn't lost any of his facility for biting off a line to inspire a laugh. While some action movies work because they cast exactly the guy you'd expect, Nobody works because it casts exactly the guy you wouldn't expect. Maybe this is the start of a Liam Neeson-esque next act for Bob Odenkirk. Or maybe he'll try opera next. At this point, I wouldn't put anything past him.