Murder by Death do it their way, fans be damned (or delighted) 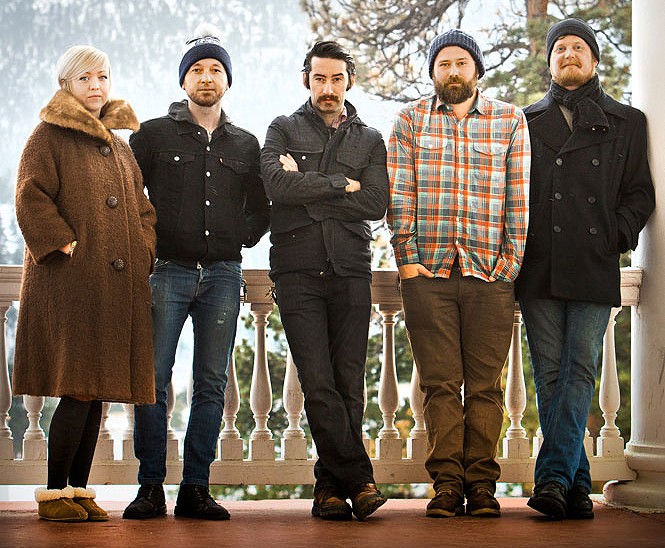 As soon as his words float through the phone, I feel a little twinge of guilt. Because when I first listened to Murder by Death's latest album, Big Dark Love—slated for release Feb. 3, the same day they hit the stage at Bar Deluxe—I thought the band had lost their minds.

But first, let me back up and get a key fact out in the open: Murder by Death has been my honest-to-God favorite band since my freshman year of college, and one I recommend with a fervent glint in my eye to anyone who I think will appreciate their moody, twangy rock and haunting cello melodies. And no bad day or writing session is complete unless accompanied by a soundtrack of my favorite album: 2003's Who Will Survive, and What Will Be Left of Them?, Murder by Death's sprawling, apocalyptic and soul-crushingly melancholy concept album about a small Western town battling the devil.

But no matter how much I love Who Will Survive, I know Murder by Death can't keep making it over and over.

"Every time we put out a record, I hope that it reaches as many people as possible, and they'll enjoy it as much as their favorite. But you never know," Turla says. "I can't predict what every single person who has heard us is gonna feel like."

After almost 15 years as a band, Murder by Death haven't reached their creative peaks by pandering to fans, rehashing the same old material. With lyrics like "Buckshot is my bread/ I drink whiskey instead of water" and huge rolling-across-the-desert guitar chords, Murder by Death and a Western aesthetic historically have gone together like a stiff drink and a broken heart. But from album to album, they've shaken up their sound, often by incorporating new instruments and experimenting with various genres. In more recent albums such as 2012's Bitter Drink, Bitter Moon, Murder by Death stepped out of the desert and into the realm of woodsy folk-rock. But Big Dark Love, the band's seventh full-length, could be Murder by Death's biggest surprise yet—think elements like synthesizer and hip-hop-inflected drumbeats.

"Whenever we make records, I tend to sort of react and respond to the different qualities of the past record," Turla says. With Big Dark Love, he continues, he wanted the music to be created by the band playing their instruments more sparsely—in contrast to the richly layered Bitter Drink, Bitter Moon.

And that meant Murder by Death would have to approach the recording process in a novel way. "Instead of just trying to write songs and going into the studio and force them out as, like, a concrete, ready-to-go thing, I would go in and I'd play my parts, and then everybody would add as little as possible," Turla says. It became something of a "creative exercise," he continues, where "everything I play has to be cool and count. There's no extra playing allowed."

In the studio, Murder by Death found creative chemistry during their first experience recording with new band member David Fountain, who joined the group roughly a year ago after multi-instrumentalist Scott Brackett—the mastermind behind such diabolical inventions as a theremin that shot off sparks when played—found himself with an immune system that couldn't handle being on the road. "I was really happy to be able to let [Fountain] just be the talented musician he is and not have to be like a control freak or something," Turla says. "He just really showed up ready to work and nailed it, it was cool."

The final version of Big Dark Love has "more open space," Turla says, compared to the earthy density of Bitter Drink, Bitter Moon. And what will probably strike fans the most are not the album's clean lines and tightly composed arrangements, but its very unlike-Murder by Death stylistic touches.

When I mention that the hip-hop drumbeat on "I Shot an Arrow" doesn't sound like Murder by Death at all, Turla laughs. "That song is, I think, one of the more strange songs we've done. ... I was going for, like, a David Bowie kinda thing with that song," says Turla, a Bowie fan since he was 10. (Fun fact: He says the track is linked to the '50s-influenced "Spring Break 1899," from Murder by Death's 2008 release, Red of Tooth & Claw.)

Big Dark Love is still undeniably Murder by Death: Sarah Balliet's cello parts rise and fall beautifully, and Turla's booming baritone is full of grit and power. He also still tends to write a lot of songs from the points of view of unreliable narrators, who, on Big Dark Love, often tell dark tales of love and obsession. But overall, the album features a Murder by Death that fans have never heard before.

And, every time I listen to it, I sing along to more and more lyrics, and hum along to tunes like "Natural Pearl" and "Big Dark Love." For all my feet-dragging, Big Dark Love is slowly but surely taking its place among my beloved Murder by Death favorites. And it never could have been if Murder by Death had stayed in the devil-plagued town of Who Will Survive.

"It's not fun to do something that you've done a million times. It's boring; it's boring to the listener," Turla says. "Taking risks, doing things that are more exciting, I think ultimately will pay off more in the end."