Three years since their astounding debut LP, Apologies to the Queen Mary, Wolf Parade continues to produce material rooted in a unique trade-off collaboration two dominating frontmen: Spencer Krug and Dan Boeckner. By pairing Krug’s penchant for eccentric prog with Boeckner’s love of stark, electronically accented rock (which they explore individually through side projects, Sunset Rubdown and Handsome Furs, respectively), Mount Zoomer is the most compelling, tension-filled album this year. Boeckner earns extra points for taking risks on his songs—including the lush waltz of an opener “Soldier’s Grin,” and his ode to Springsteen, “The Grey Estates.” Krug remains intent on continuing his admirable weirdness; “Call it a Ritual” sounds like a light imperial march and “California Dreamer” is infused with Doors-type psych-influences. But no one holds the reins for too long; and in this sparring between two formidable leaders, the listener is the winner. (Sub Pop)

Ever since Seattle’s Blood Brothers released ... Burn Piano Island, Burn, it was clear that they were much more ambitious and experimental than their screamo-hardcore genre would ever allow them to be. Jonny Whitney’s child-being-tortured yelp transcended the standard hardcore scream and would become the major fixture on later Blood Brothers albums and his intriguing electro-experiment, Neon Blonde. Joined by BB guitarist Cody Votolato and Pretty Girls Make Graves drummer Jay Clark, Whitney’s Jaguar Love defies expectations again by being, well … accessible. “Highways of Gold” begins the three-song EP as a driving dance-punk number, accented by Whitney’s signature organ. “My Organ Sounds …” deceivingly pop-ish, like a twisted take on My Chemical Romance. By sprinkling discord and sass throughout, however, Jaguar Love is either catchy-as-hell or tongue-in-cheek. Either way, you’ll wish there were more than three songs. (Matador) 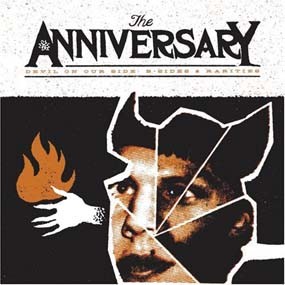 The Anniversary Devil on Our Side: B-Sides & Rarities

The Anniversary never caught a break during their brief stint as a band. Their first album Designing for a Nervious Breakdown earned them the label of Get Up Kids knock-off while their follow up, the markedly different Your Majesty, alienated fans of the booming emo genre. Vagrant also refused to release their last album due to the band’s personal drama with label heavyweights Get Up Kids—until now. Devil, a sprawling two-disc collection of mostly unreleased material, showcases the band’s amazing progression from typical, synth-driven pop to wild experimentalists. While there are some heartening tracks on the first disc, the real gems come on disc 2. “Che” is a sexy funker complete with wa-wa, and “Let it Slip” is a lo-fi dance track that could easily have been produced by Pharrell. (Vagrant)