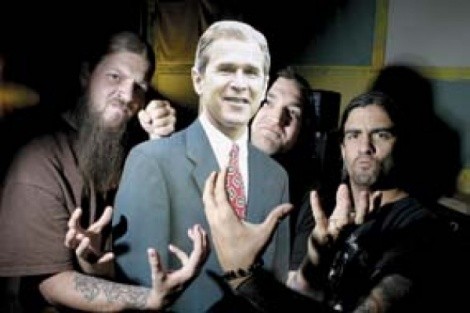 Salt Lake City metallurgists Iota are having a pretty good year. They played South by Southwest in March, put out the heavy, intoxicating Tales on Small Stone Records, and managed to pull off a drama-free heist of drummer Andy Patterson from four other projects.

“I just sent a mass text to everyone, they all felt it was coming and were all pretty cool with it,” he says, adding that the split simplified things in more ways than one. “Iota’s not the kind of band trying to take over the world, and play every week. Also, it was a business decision, I either had to cancel a recording session or a band practice, so every day I felt like I was bumming someone out. I had to make something a priority.”

Plus, “We’re in a really comfy situation. We have a good label for the kind of music we play. They put out the record, and it’s distributed really well in Europe and the United States. They gave us carte blanche, we made the record ourselves and didn’t have someone telling us we had to record, with this person or had to do it this way or it has to sound this way.”

So, how good is Tales? The first few listens were great, though I just couldn’t picture Joey Toscano as the singer—he smiles too much to be such a howler. The lyrics are awesome, ranging from songs about home reconstruction and killing houseflies (“New Mantis”) to H.P. Lovecraft (“We Are the Yithians”). Harmonica master Bad Brad Wheeler joins the band on “Opiate Blues” whose epic length shifts radically when performed live depending on the band’s mood. The album’s real gem, “Dimensional Orbiter,” is a nearly 23-minute behemoth based on bassist Oz Yosri’s fascination with cults. It’s also that song that caught SSR’s ear before signing Iota.

Yosri joined Iota after following them as a fan. “I pretty much moved up [from Provo] so I could join these guys. Iota was my favorite band, I’d been going to all their shows for six months, and I even made my own Iota shirt,” he says. “I still am way stoked on jamming with these guys, even if they are old enough to be my dad. I hate the word ‘efficient,’ but, no time in this band since Andy [Patterson] has been with us has been wasted. Everything has been for a purpose.”

“I miss those days. I miss being so stoked on music,” Patterson says. “I’m jealous of Oz; he’s all bright-eyed and looking at the world with optimism. Our nickname for him is ‘Kid Potential.’”

“At first when we got together with Andy, we were petrified all the time [thinking], ‘This dude’s seen it all; we’re going to ask him to practice too much and burn out his candle,’” Toscano laughs.

“I trained these guys well,” Patterson says with a smile. “We got together three times to practice for the album. For me, doing it the way we did it and having it turn out the way it did enforced that philosophy; we don’t need to practice five days a week.”

Patterson loves being a musician, and he loves to record music—but there are important things about being in a band that he really hates: “I hate band practice, I hate playing shows, I hate promoting, I hate making shirts and stickers. I’ve never put out a MySpace bulletin about a show; I’ve never promoted any shows I have,” he says. “My main priority is making a record that’s awesome. I’d die happy if I made one record that impacted me the way some of the records that I grew up listening to did.”