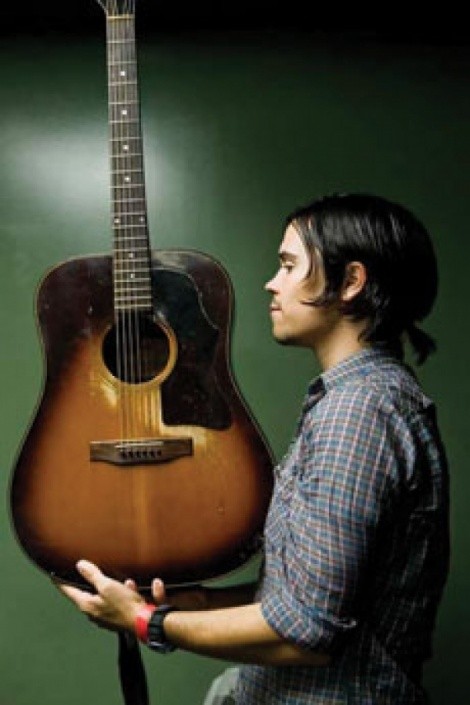 Utah isn’t the first place people move to further their music careers, but if Joshua James had his way, Provo would be the next Seattle, Detroit or even Omaha, where Saddle Creek Records churned out artists like Conor Oberst and Azure Ray. But James grew up in Nebraska and he’s not impressed with his “boring” hometown. Provo, where he has lived for the past three years, is where it’s at.

“It’s pretty bizarre how many people are making honest music there,” he says on the phone from Los Angeles where he just finished up a tour with British recording artist David Gray. “You wouldn’t expect it. I lived in Vegas for a while and thought there would be a lot of good music on the strip but it’s completely dead. It’s terrible.”

James would love to change all of that—would love to put Provo on the map—but he recognizes the innate futility of his quest. He didn’t score high-profile gigs on talent alone, and his Utah County peers—no matter how amazing—won’t succeed without going the extra mile. James believes that, thanks to their religious upbringing, many Mormon musicians immediately discount music as a viable career choice, opting instead to study medicine, law or business—practical fields that will help them support their families.

“They write off music as either an embarrassment or something that’s not a worthy goal—and it totally is,” James says. “It’s important that people can relate to each other and music is a huge catalyst for that.”

James found salvation in music after a harrowing trip to Venezuela during which the country’s government was overthrown and its populace thrust into chaos. Loaded guns pointed at his chest provided a rude awakening for the then 21-year-old corn-fed boy.

“It was kind of a crazy experience and when I got back, for some reason, I wanted to write about other serious experiences, whether it be drug addition or suicide or child abuse—things I have seen firsthand or through friends.”

One thing James doesn’t write about—love. “It’s such an oversaturated topic,” he says, adding that heartbreak in general is more fascinating than straight-up romance. “Maybe I’m just not clever enough to write a real love song.”

Not likely. James might be opposed to love songs, but he’s certainly not lacking in the wit department. His songs, peaceful, subdued and yes, often depressing, are never predictable or clichéd. Instead, he evokes universal experiences with a vivid narrative style. On “FM Radio,” he sings in his signature cracked falsetto about a friend’s loss:

“Heard about/ heard about your daddy/ got sick/ drove down to the river to die alone ... Your mama says ‘Stay strong’/ that is what you did/ years later/ years down/ later down the road/ on the bus with your FM radio/ half-drunk/ cigarette hanging down/ what happened to your lonely soul?”

If, after the song ends, you feel like crawling up in a ball and sobbing, you’re not alone. Breathe deep and hold tight. For every comment on sadness, there is one filled with joy; observations about disappointment followed by insistence upon hope. Onstage, James holds no punches, packing enough heat to inspire not bawling, but brawling among equally passionate audience members.

At a recent show where he performed an antiwar song, a couple approached him after the concert to deliver a mixed review. They were blown away but made a point of saying, “‘We will never buy your record because of that song’—they liked it, but would never come to another show,” James recalls without angst. “I think there is beauty in having that contrast. If you always play it safe, it’s like you fall into the same old singer/songwriter category. We experience that lumping—it’s a hard thing to break.”

James is up for the challenge. Now off the David Gray tour, he’s hard at work in the studio, writing material that hopefully will lead to another tour, and another, until finally he’s big enough to headline. Then he’ll call up his Utah buddies, see if they might open for him and discover that music isn’t always a passing phase.