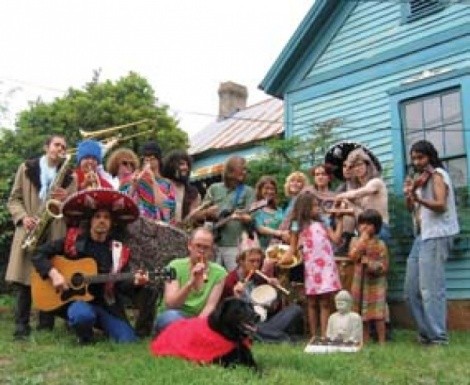 In October 2005, Dark Meat made its public debut, and what started out as two roommates steeped in rock & roll knowledge cranking out Neil Young tunes in the fecund musical college town of Athens, Ga., ballooned into an impossibly vigorous, sprawling band with upwards of 12 members.

Loose recording sessions culminated in 2006 with Universal Indians (Orange Twin), named by Athens-based alt-weekly Flagpole as best local album of the year. It was, however, Dark Meat’s Flaming Lips-esque live shows—performances complete with full horn sections, choreographed backup dancers, goofy outfits—that caught the public’s eye at this year’s South by Southwest, the second high-profile festival for Dark Meat. “South by Southwest was a business venture, and we’ve been through the trenches enough to view it as such,” says John McHugh, a lead singer whose delivery of the band’s cataclysmic, fever-dream songs gives the massive collective a fiery focal point.

“It’s basically you waving a flag towards all the expectant press, and that’s why you’re there. We got a lot of attention, and I’m thankful for it and for what it’s going to result in—that’s why we did it. It was a business model. But all of the press focused on the spectacle. I can’t blame ’em—we were pretty spectacular in that sense of the word, just being destructive and insane, and being really over the top. We had leaf-blower confetti going and everything. But only a few people focused on the music. Y’know, the Stones had a horn section, and nobody focused on that or thought it odd back then.”

One particularly raucous night in Texas found the band performing The Stooges’ classic album Funhouse in its entirety, with McHugh harpooning his mic stand into the club’s ceiling while fending off irate bouncers with a monitor; club security tried to corral the band after the show to give the members a stern talking-to but was evidently overwhelmed by the manic, face-painted, costumed rock & rollers.

Vice Records, the notoriously fickle taste-making label, home to bands like the Black Kids [see Music p. 52] and Chromeo, snatched up the group earlier this year and recently re-released Universal Indians with some bonus tracks on CD and vinyl. Vice will also release Dark Meat’s sophomore album later this year. McHugh says he’s happy that the partnership with the label will bring the band more attention.

“That’s their job. I give them tons of credit for giving us the complete room that we need,” he says. “The advantage of Vice is how visible they are, so that’s going to be the main way they help us. Vice has incredibly prescient ideas about media. They completely presaged this whole collapse of CDs being a viable financial thing, because everything is digital. They realize that concrete recorded music is basically worthless—that what people want to invest themselves in is the experience and the culture and personalities of the band. I think that’s why they dug us so much.”

“It’s a thing of real beauty,” McHugh says about the double-vinyl gatefold edition of the album. “And this next one’s gonna fry brains, too—I hope!”