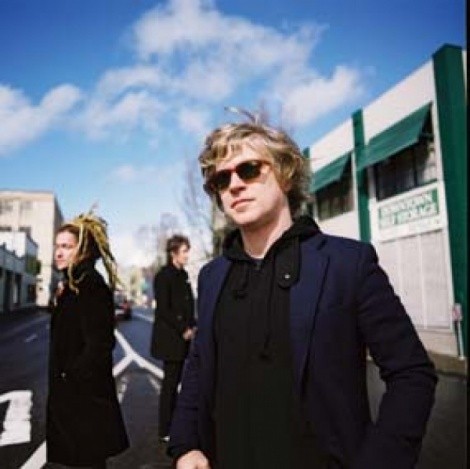 Talk about Lucky—Nada Surf once got to back up Joey Ramone. The NYC trio, whom you know either as authors of a summer hit from 1998 or one of indie rock’s most clever and substantial bands, was covering “I’m Sick of You” for the 1997 Iggy Pop tribute, We Will Fall. The lanky, legendary Ramones singer had tracked “1969” and needed a band to back him up at the record release party.

“They asked us,” says Nada Surf singer-songwriter-guitarist Matthew Caws. “So, of course, we were like giggling schoolchildren.”

The band practiced “I Wanna Be Sedated”—the other song Ramone would play that night—for two weeks, only not at the Ramones’ usual breakneck pace. “Ira [drummer Elliot] insisted on playing it at the record speed,” says Caws. “So we did it that way, and Joey really liked it; he said it reminded him of the old days. After the record-release party, he said, ‘Next time you have a show, if you learn your favorite six or seven Ramones songs, I’ll get up and sing them with you.’” And, two weeks later, he did.

“I guess word had gotten out,” says Caws, “because there were all kinds of people in the audience … all ages, like people in their 60s and teenagers. We did ‘Cretin Hop,’ ‘We’re a Happy Family,’ ‘Lobotomy,’ ‘Bonzo Goes to Bitburg,’ ‘Do You Remember Rock & Roll Radio?,’ ‘Judy Is a Punk’ and ‘I Wanna Be Sedated.’ That was definitely a life highlight.”

Lucky, then, is an apt title for Nada Surf’s fifth album, but not just because they got to play with one of the coolest rock stars ever. First, they got a major record deal, and High/Low was produced by another cool and mellow rocker, The Cars’ Ric Ocasek. Said album spawned that radio song, “Popular.” But even sweeter is that Nada Surf thwarted one-hit-wonderdom and music-industry pitfalls to do their best work.

Lucky brims with exquisite, thoughtful rock and Caws’ superior songwriting. The lush, ghostly “Weightless,” wistful “See These Bones,” delicately anthemic “Beautiful Beat,” quasi-biographical rocker “Ice on the Wing” (about Caws’ grandfather, a World War I flying ace)—virtually every song on the 11-track album is a feast of melody and substance. Just as their post-“Popular” predecessors, they could’ve been hits. But in that sense, thinking about radio play and mainstream success, perhaps it was a good thing that Nada Surf’s “luck” ran out when it did. “As of this writing, [Barsuk founder] Josh Rosenfeld has never heard ‘Popular,’” Caws laughs. “Isn’t that great?”